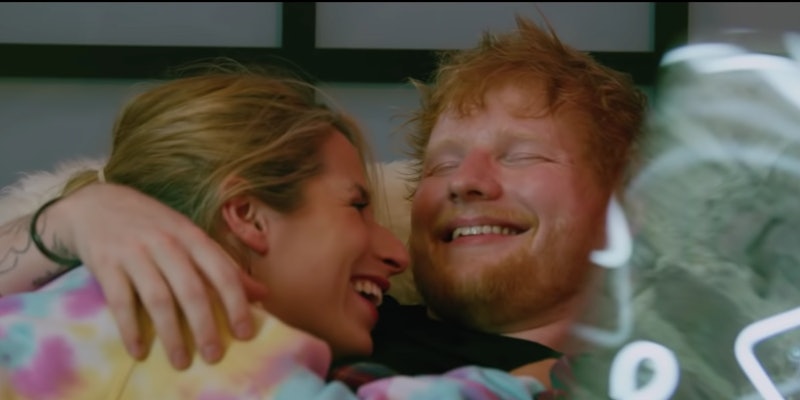 In a new captioned music video for his song with Ella Mai, "Put It All On Me," Ed Sheeran and his wife Cherry Seaborn share their love story alongside other couples from all around the world. A vulnerable exploration of the beautiful, and sometimes difficult origins of romance, the video is the perfect celebration of Sheeran's upcoming wedding anniversary, and the perfect celebration of human love.

"Back in high school, Ed and Cherry were crushing hard," the video subtitles read over a dance session in their kitchen. "They made out at the castle on the hill." They move into their living room and fall into each other's arms. "A few years ago, they reconnected," the subtitles continue. "There were fireworks. They married in January 2019."

Ed and Cherry are one of many couples and corresponding stories featured in the video. There's an Australian couple named Stephanie and Tyson, who, in the video, are on their honeymoon; Nellia and Dietmar, a couple married for 49 years; Caroline and Petra, who married as soon as it was legal in 2001; Jennie and Kamel, who spent their first year of marriage separated by U.S. immigration; and more. All of them dance across the screen as their unique stories are displayed beneath them.

According to People, Seaborn and Sheeran met in school when he was 11, and reconnected in 2015 at Taylor Swift's Fourth of July party. "She worked on Wall Street in New York, and I had like six shows [around New York in 2015]. It was around then, and we reconnected," Sheeran told the publication. "I went on tour again, and then I went to Taylor’s 4th of July party. I was texting [Seaborn], and she was like, ‘I’m in Rhode Island at a Fourth of July party,’ and I was like, ‘So am I.’ I kinda said to Taylor, ‘Can I invite one of my old schoolmates?’ The rest is history.”

He proposed to Seaborn at the end of 2017. "Got myself a fiancé just before new year," he wrote on Instagram. "We are very happy and in love, and our cats are chuffed as well."

The Sun reported that they got married in December 2018, which is incorrect, according to the "Put It All On Me" video. Sheeran himself only publicly confirmed their marriage in July, per People.

"This is the final video from my no.6 collaborations project," he wrote on Instagram, sharing the new music video. "it's for Put It All On Me feat @ellamai, enjoy." For Sheeran fans, his last video of the year also might be his most special thanks to the inclusion of his real-life love story.