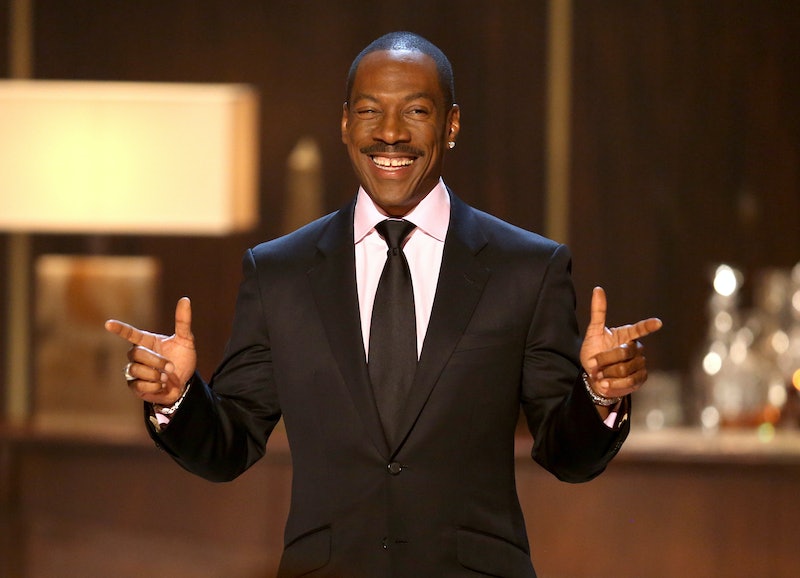 BET's revival of a 1990s hit film stirred up excitement from the get-go, especially because of the big names attached to it. But a few people heavily involved in the original have been notably absent. It seems like for now, Eddie Murphy won't be in Boomerang, the series, which functions as a sequel to the beloved movie, but there might be other familiar faces lined up for longtime fans.

It doesn't appear that Murphy, who played Marcus in the 1992 original, has made any comments about reappearing in Boomerang. And executive producer Lena Waithe has also said that though she hears a lot of people asking if they'll see any familiar characters, fans shouldn't expect the original cast to come back. "But I always tell people, 'If you wanna see Grace Jones, and Eartha [Kitt] — may she rest — and Halle [Berry] and Eddie and Robin [Givens], go watch the movie,” she said at TCA, according to The Wrap. "If you wanna see some fresh faces and a new take on the movie, come watch the show."

But Berry, who portrayed Marcus' love interest Angela in the first iteration and is heavily involved in the sequel series' offscreen production, has actually said to look out for her character sometime in the future. "You might see me at some point. I can’t speak for anybody else in the cast, I can only speak for myself,” Berry told Entertainment Weekly. “I am so proud of this show, and you might see me. You might see me, for sure."

Waithe said in the same piece that she's hoping to create a series that the original cast will see value in, so she definitely has the opinions of Murphy and others in mind. "Here’s the deal: They’ll see it and say, ‘Oh, This is so dope.’ That’s our goal," she said. "I was like, lemme make something so good that Eddie’s like, 'all right, man that’s lit,'” she said.

If Berry shows up, it wouldn't be that far off for Murphy to pop in later down the line, especially since one of the main characters of Boomerang's new version is the child their characters went on to share. But if he doesn't, it's probably because he's got other work on his plate, including a couple more reboots that are bound to excite fans. He's returning to Murphy's IMDB page lists a 2019 film called Dolemite Is My Name as a project that's currently in post-production, he's expected to star in Kenya Barris reboot of Coming to America, slated for 2020, and Beverly Hills Cop 4 is also on the lineup in the coming years.

Viewers have been obsessed with Boomerang for decades, and this reboot is really allowing them to sink their teeth into a new twist on an old series. Reviews have been largely favorable, praising Boomerang's ability to resonate with a new generation of viewers.

Shadow and Act's Trey Mangum wrote that "Boomerang could be just the jolt of life that BET needs to establish itself as a formidable producer of not just Black entertainment, but overall programming that is relevant to today’s audience. Mangum also added that "the razor-sharp, fast-paced dialogue often sounds like a set of trending topics on Black Twitter, but it doesn’t come off as pandering; it feels authentic and relevant."

Rolling Stone's Alan Sepinwall also highlighted the show's commentary, saying "Boomerang feels less like a rom-com unnecessarily stretched out to series length than a warm and smartly observed look at black millennials looking to separate themselves from the generation that came before."

Only time will tell if some of the original cast comes back, but with the success Boomerang has enjoyed so far, it's definitely not impossible.