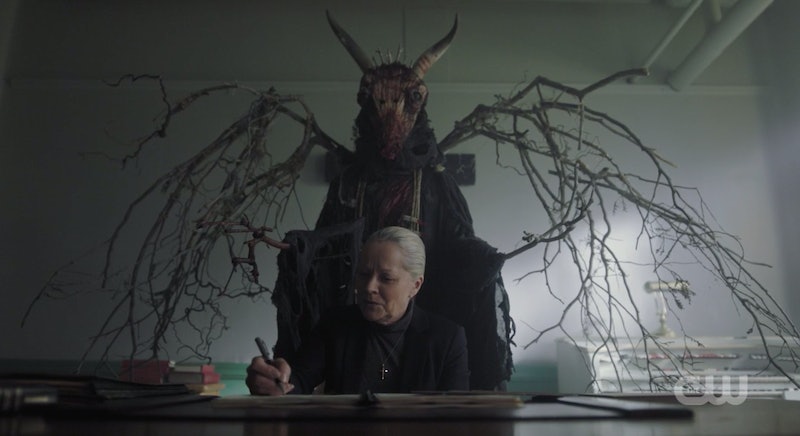 Leave it to Riverdale to introduce a serial killer/Big Bad that requires not only evildoing, but a whole bunch of arts and crafts. Whoever is pulling the nefarious strings this season has a lot of time on their hands, and I think it's time we admit that the Gargoyle King on Riverdale is TV's most preposterous villain ...maybe ever? Gather 'round, Eldarvarians, because this "bit" has gone a bit too far.

Fiction requires a certain amount of suspension of disbelief. We give that to Riverdale week after week. We don't blink at how Veronica Lodge, a 16-year-old, opened a speakeasy (read: juice bar) and runs it while going toe-to-toe with her mob boss father. We don't fuss over how basically every dad in the town is secretly evil. It's fine that the teens are always wearing nothing, even when it seems to be the dead of winter.

However, think about all the Gargoyle King has brought to the table in just half a season:

That's... a lot. Who has the free time to devise all of that? Creating the costume alone is a huge commitment. I've made stuff with branches and leaves before. It doesn't hold up for very long and isn't easy to store. The Gargoyle King is almost certainly making multiple trips to Fox Forest and/or Eversgreen Forest in order to find more leaves and twigs to keep this up. Not to mention whoever is wearing it is then waiting around in the woods for god knows how long just in case someone worth scaring happens to come along.

On top of all that, the King has somehow brainwashed most of Riverdale, a small neighboring town called Athens where Laurie Lake lives, the Sisters of Quiet Mercy, and everyone at the Leopold and Loeb Detention Center — all in a matter of what, the three months of time that passed between Seasons 2 and 3? It would honestly be pretty impressive if it weren't so utterly implausible.

But why stop there? The Gargoyle King also makes regular visits to the Sisters and L&L. Like, did the Sisters have to place a call to make sure whoever's behind the costume was available for office hours when Betty attempted her escape? The King also took the time to set up a threatening (and once again, arts and crafts heavy) homage to Scream at the Cooper household. Not to mention Dilton and Ben's elaborate murder scene. Let me repeat myself: It. Is. Too. Much.

To be completely fair, I can think of campier TV villains, but they're all on shows like Buffy the Vampire Slayer, The Flash, Doctor Who, American Horror Story, and Agents of S.H.I.E.L.D. that have magic or science fiction or both. If in fact there are no supernatural doings afoot, the Gargoyle King doesn't add up logistically at all.

It's probably one of the parents, as always, but when did any of them decide to be that extra? Is this some kind of "I'm not a regular serial killer, I'm a cool serial killer" Mean Girls spoof? Why now? Are we really meant to believe that someone on Riverdale woke up one day and decided to resurrect a character they created in the '90s and use that character to murder as many people as possible? What were they doing between the Midnight Club and now? Not important! Living their life, presumably!

There's just no answer that will satisfactorily explain how any one person did this much work to mythologize themselves and take multiple towns down with them. At the very least, Riverdale better show us a day in the life of the Gargoyle King, hot-gluing more branches to those wings, placing game manuals in all the lockers at Riverdale High, following a tip to go wave at Jughead in the woods, and setting up red lights for various hauntings. At this point, how they're balancing all of this is a bigger mystery than who's behind all those, uh, twigs.

More like this
Everything To Know About 'Only Murders In The Building' Season 3
By Gretchen Smail and Kadin Burnett
This 'Gossip Girl' Wardrobe Error Has Gone Viral On TikTok
By Alyssa Lapid
A New 'And Just Like That' Table Read Pic Confirms A Key Character's Return
By Jack Irvin and Grace Wehniainen
'RHOSLC' Star Jen Shah Refuses To Do A Post-Sentencing Interview With Andy Cohen
By Brad Witter and Jake Viswanath
Get Even More From Bustle — Sign Up For The Newsletter
From hair trends to relationship advice, our daily newsletter has everything you need to sound like a person who’s on TikTok, even if you aren’t.