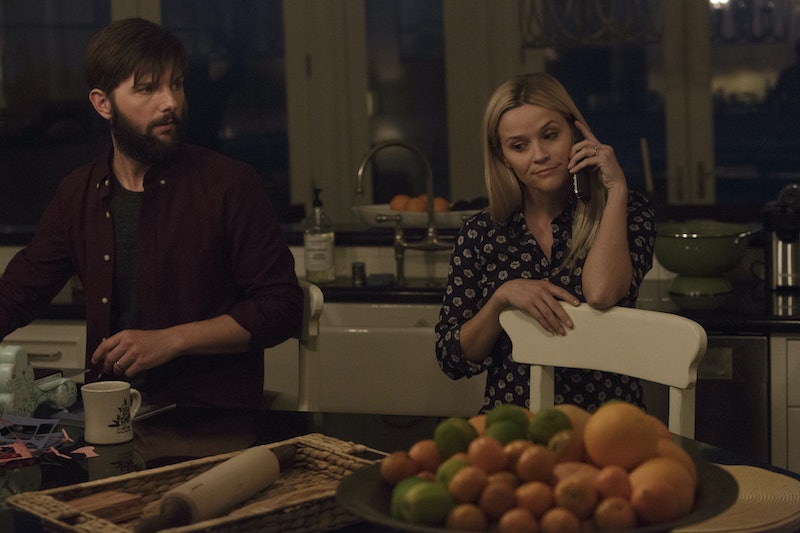 For the most part, Big Little Lies appeared unafraid to pull back the layers of what toxic masculinity can look like. Yet although the show focused heavily on Perry's deeply problematic and abusive behavior, it's an issue that Big Little Lies never delved into Ed's creepy behavior, too. After establishing himself as a good guy, outwardly a knight in shining armor, Ed's (played by Adam Scott) eye began to wander, and his words carried the weight of a man overstepping his bounds. To be fair, Big Little Lies could only feature a few of these moments because it had bigger narratives to stick to and screen time needed to be delegated to other characters. But ultimately, the fact that Big Little Lies never addressed Ed's problematic behavior doesn't sit well with me.

The show did a great job of setting up Ed as a foil to both Perry and Nathan. You could argue Ed was there to prove that not all men are bad. How many times have we heard that broken record? And in the beginning, Ed seemed like such a good guy. Outwardly, he was the sweet, good-natured dude who balanced out all of Madeline's manic, grudge-tastic, two-faced energy. He softened her, he supported her, and even though they were going through a dry spell in the bedroom, he was still openly affectionate to her. He was the definition of "a rock." Then, at some point, viewers began to notice Ed's sideways glances.

In March, Vulture asked Scott about Ed's behavior on Big Little Lies, and the actor said:

I think that Ed might be the kind of guy who has a very deliberate plan for who he is and how he’s going to behave and be in his life, and how he’s going to fit into the world. He thinks he’s one of those people, but then you get into a situation, any given situation, and suddenly you have a couple balls in the air, and you start improvising, and you end up doing or saying things that you weren’t anticipating. I feel like Ed could be that kind of person... I think we all say things that, as it’s coming out, we’re not quite sure what we mean by it, you know?

More than once, Ed displayed some troubling behavior. The first time was when he and Nathan met up to discuss reconciling the two couples (Nathan and Bonnie versus Ed and Madeline). At one point in the conversation, Nathan vaguely threatened Ed, and Ed took a moment to recount how guys like Nathan used to pick on him in high school. The monologue revealed that Ed was a nerd, and it gets discomforting when Ed shares that he used to dream about the day when he could beat those alpha males to a pulp before coolly walking away.

The second weird moment came when we learned Abby had visited Planned Parenthood to procure birth control. The reveal added a newfound layer of complexity to Abby's character, and when Ed overheard the conversation, it was as if his opinion of her changed and he now viewed her as an adult. While Madeline was pissed that Abby made a huge decision without her knowledge, Ed listened and then watched Abby leave for school, his eyes seemingly moving up and down her backside. Pretty unnerving.

The final creepy blow was when Ed visited Bonnie to arrange the fateful reconciliation dinner between the couples. Ed's wandering eye seemed to have a field day inside that yoga studio. Aside from remarking how lovely Bonnie looked when she emerged from teaching a class, very sweaty and very out of breath, it looked as if Ed used his eyes to drink her in. Ick. On his way out of the studio, without anyone to catch him, he also seemed to blatantly turn around and look at one woman's backside.

What was most frustrating about Ed's actions is that there was never anyone there to catch him or call him out. He never gave Madeline pause, because damn it, he was a good guy. But good guys don't look at their teenage stepdaughters with a lusty gaze. Good guys don't overstep when complimenting a woman by noting how beautiful she looks when she sweats. Good guys don't have to threaten physical violence, even implicitly, to solve their problems. At least, that's what women like Madeline and you and I have been taught.

That's why Madeline never saw Ed's unsettling behavior; she was blind to it all because he had been branded a good guy by the simple fact that he didn't hit her, verbally abuse her, cheat on her, or do any other outwardly problematic thing. This sends the message that as long as good guys stay in the "good" lane, what does it matter if their eyes wander or their comments go over the line?

Big Little Lies did well in dealing with toxic masculinity when it manifests in a major way, like with Perry, but not when it simmers under the surface. But exploring Ed's brand of bad behavior, especially since it was markedly different from the other male behavior patterns displayed on the show, would have added a nice layer to the show's unpacking of what toxic male actions can look like in real life.

More like this
Lydia Leonard Is Setting The Record Straight
By Olivia-Anne Cleary
Sandra Bullock, Girlboss Extraordinaire
By Matt Harkins & Viviana Olen
Spice Girls’ Net Worth: The Richest Member Is Wealthier Than The Rest Combined
By Hugh McIntyre
All The Theories About Kathleen Peterson’s Death
By Morgan Leigh Davies
Get Even More From Bustle — Sign Up For The Newsletter