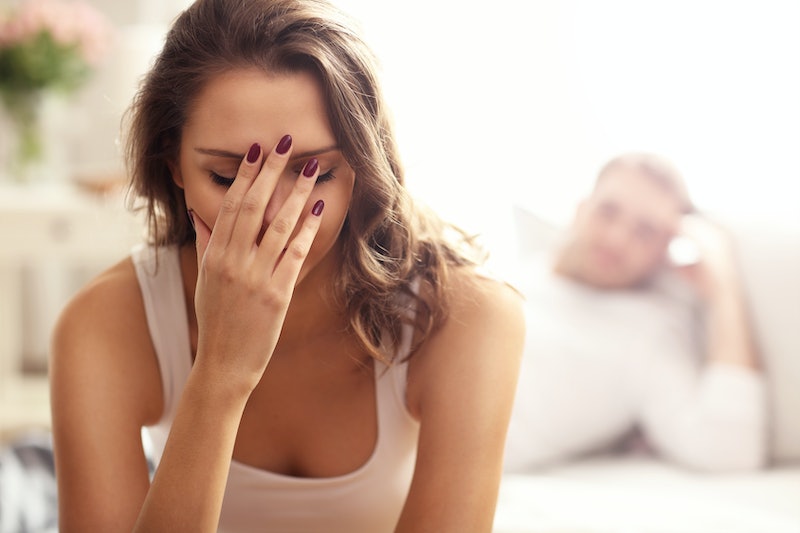 When women talk about experiencing sexism or feeling unsafe, it has become a cliché for men to respond with "not all men." "Not all men sexually harass women," some might say, or, "not all men are rapists." This is true, but there are many reasons "not all men" misses the point. When we shift the discussion from the oppression of women to the protection of men's images, we undermine the very real problems women and men face.

There is a place for discussions of "not all men" in feminism. We can talk about, for example, how not all men were assigned male at birth, not all men are attracted to women, and not all men are innately aggressive, unemotional, or other things men are stereotyped to be. And we can even talk about how not all men are rapists — when it's serving a purpose like, say, pointing out that sexual violence is not natural or normal. But too often, the phrase "not all men" is used to invalidate women's claims about gender inequality or make men feel less uncomfortable about their privilege. In that case, it's not really serving a purpose, and it's silencing women.

Here are some reasons why we need to stop derailing conversations about feminism by saying "not all men":

1. Nobody Was Making Any Claims About "All Men" In The First Place

When a woman talks about getting catcalled on her commute, getting her ideas shut down at work, or facing other microaggressions women experience on a daily basis, she's speaking from her own experience. She's not trying to make any claims about any particular group. Often (though not always), these stories do include men, and we shouldn't have to leave them out in order to make other people comfortable. The unequal, unsafe environment we live in exists whether "all men" contribute to it or not.

When feminists talk about gender inequality, we are not blaming men. We understand that no man (at least no man alive today) created patriarchy, although many people of all genders perpetuate it. In fact, many men would probably rather live in a society where gender roles did not exist. When people say "not all men," they're assuming that feminism is making claims about men as a group, which it isn't.

It doesn't matter if not all men are rapists or harassers or sexists. The point is, these types of people do exist, and we don't know whether or not you're one of them because there's no way of telling. So, it is very logical and reasonable to worry about being victimized even if most people around us aren't perpetrators. Telling women they shouldn't be concerned or afraid because not all men are dangerous gaslights them for having very valid emotions.

4. This Isn't About "Men Versus Women"

When women complain about sexism or rape culture, men often go on the defense, even if we're not talking about men. The truth is, women experience sexism at the hands of other women, women are capable of sexually assaulting people, and men are capable of being victims. Cultural ideas about masculinity play into these problems (see below), but these issues are far larger than men as a group. When we talk about social justice, we are talking about large-scale, structural, systemic inequalities.

5. Toxic Masculinity Does Affect All Men

Whether you like it or not, if you are a man who has grown up in the United States or really any Western culture, you have picked up some aspect of toxic masculinity. This doesn't mean you are a rapist, but it probably means you have been taught to objectify or underestimate women at some point. Own it. Similarly, as white people, we need to accept that we probably have racial biases. Saying things like "I would never rape anyone," "I don't know any rapists," or "I don't see color" detracts from how prevalent these issues are. If you believe you are the exception and the "good guy," you're probably not taking a hard enough look at yourself.

6. Shifting The Attention To Men's Egos Detracts From Women's Oppression

When men say "not all men," they're often speaking defensively, Clementine Ford points out in Daily Life. They see themselves in stories about women's oppression and don't like how they're being represented. But these stories aren't about them, and members of marginalized groups should be able to talk about their own experiences without worrying about damaging privileged people's egos. When men or white people or members of another privileged group have the opportunity (which nobody owes them!) to learn about another group's experience, their job is to listen, not to defend themselves.

More like this
10 Organizations To Support On Latinx Women's Equal Pay Day
By Caroline Burke and Mia Mercado
Dyson Is Dropping Futuristic, Air-Purifying Headphones
By Rachel Lapidos
6 Steps For A Successful Healing Manifestation Ritual
By Kristine Fellizar
Here’s Your Daily Horoscope For December 8, 2022
By Mecca Woods
Get Even More From Bustle — Sign Up For The Newsletter