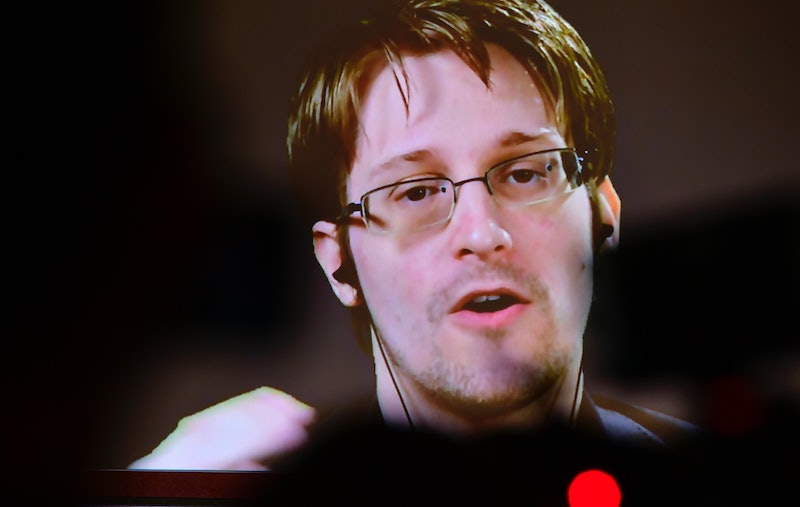 President Trump's decision to fire FBI Director James Comey turned just about everything on its head. Democrats furious over Comey's mishandling of the bureau's investigation into Hillary Clinton's emails are now suddenly his biggest defenders. Trump, who praised Comey on the campaign trail, now says that he has lost his confidence in him. But it doesn't stop there. Now, even Edward Snowden has weighed in on Comey's firing (on Twitter, no less), decrying it as dangerous "political interference." And this from a man who's currently living in Russia because Comey wanted to put him in jail.

"This FBI Director has sought for years to jail me on account of my political activities. If I can oppose his firing, so can you," Snowden wrote late Tuesday. In another tweet that linked to a New York Times article, Snowden added, "Set aside politics: every American should condemn such political interference in the Bureau's work." The Times article starts by noting Trump's move to fire Comey as "abruptly terminating the top official leading a criminal investigation into whether Mr. Trump’s advisers colluded with the Russian government to steer the outcome of the 2016 presidential election."

That's what Snowden's concern is, too. The fact that he would stick up for the director is significant, given that he's been on the run from American officials since 2013, when he leaked National Security Agency documents detailing the agency's mass data collection and spying on American citizens.

Comey publicly commented on Snowden's case several times. In 2015, he told reporters, "My view is [Snowden is] a fugitive. I’d love to apprehend him so he can enjoy the benefits of the freest and fairest criminal justice system in the world." When asked about the benefit of the debate gained from Snowden leaks, Comey countered that Snowden leaked more documents than just those relating to mass collection of Americans' information. So you see, Snowden probably is not the biggest fan.

The Trump administration is probably far from worried about Snowden's take. They are already feeling the heat of the media and Congress. The move has been denounced by Democrats, and it hasn't pleased many Republicans either. Sen. Jeff Flake, a Republican, posted on Twitter, "I’ve spent the last several hours trying to find an acceptable rationale for the timing of Comey’s firing. I just can’t do it."

But it's still noteworthy to hear Snowden's view, given that lots of American citizens have been concerned about Comey's role in our democracy. On the one hand, his inappropriate public discussion of the investigation into Clinton's emails may well have influenced the election result — but he also was one of the few independent agents overseeing the investigation into the possible Russia-Trump campaign collusion. Firing him for what he did might have made more sense down the road, after either this investigation was closed, or after a special prosecutor was appointed.

Now, it seems that an independent investigation the only path forward. For the future of the public's faith in the FBI, as well as American democracy, I hope that's what happens next — and I bet Snowden would too.