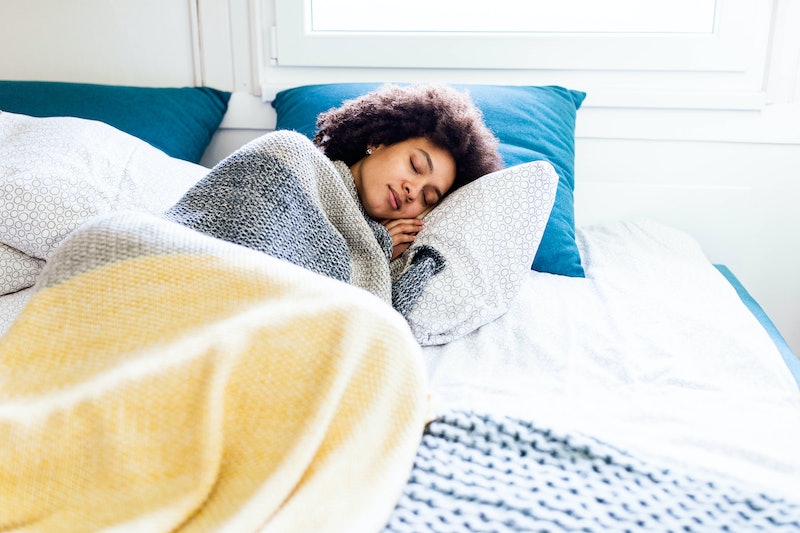 The only good thing about Daylight Saving Time is getting that sweet, sweet extra hour of sleep in November. In March, it's a decidedly less sweet story. If you're concerned that this year's loss of an hour will throw of your sleep pattern (not just your old-school watch), you aren't off-base. The effects of daylight saving time on your body can be mitigated with some good old-fashioned sleep hygiene.

"When we spring forward, not only are we losing an hour of sleep, but our brains’ melatonin production is also out of sync with the sunset and sunrise," says Janet Kennedy, Ph.D., founder of NYC Sleep Doctor and author of The Good Sleeper. Your brain's relationship with melatonin is an important one when it comes to getting some solid shut eye. "At nightfall, the darkness signals our brains to release melatonin to prepare our bodies for sleep," Kennedy tells Bustle. "At sunrise, the light signals the brain to stop releasing the sleepy hormone."

Daylight Saving Time abruptly changes the amount of sunlight you get during the day, and when the sun rises and sets in relationship with your own waking and sleeping times. This sudden shift can be rough on your body. Kennedy says that springing forward can keep you up later at night and leave you feeling extra sleepy during the day.

Lest you be tempted to shrug this issue off as just another day of sleepiness, Kennedy tells Bustle points out that studies have found the time change has serious effects. "When the clocks change for Daylight Saving Time, there is a spike in drowsy-driving related car crashes. Driving drowsy can be more dangerous than drunk driving and is responsible for over 100,000 crashes a year."

It can take up to a week to get your body properly adjusted to the new time, Kennedy says, especially if you're already prone to sleep disorders or are generally sleep-deprived. "In the week leading up Daylight Savings, try starting your bedtime routine 20 minutes earlier to help your body slowly adjust and transition after the time change," she suggests.

If you work nights, though, it might not be about shifting your sleeping hours per se. Instead, you might want to focus on shifting your eating schedule, Kennedy suggests, to help you transition your everyday activities to accommodate the changing amounts of light. "When you finally get home to sleep after a long night’s work," she says, "you’ll want to close the curtains to help your body relax and promote the production of melatonin so you can get into a deep, restful sleep."

That deep, restful sleep will probably come a lot easier if you unplug as long as possible before you let your head hit the pillow. "Smartphones emit blue light and stimulate the brain, making it difficult for your body to relax and produce melatonin," Kennedy tells Bustle. "Throughout the first week of Daylight Saving Time, put extra care into your bedtime routine: keep your lights dim, read a book, and make sure to allow some time to unwind before bed."

What about battling fatigue the morning after springing forward? "Let the light in," Kennedy suggests. "Getting direct sunlight or using a light therapy device in the morning helps to stop the production of melatonin and fight fatigue." Fatigue is especially hard to defeat during Daylight Saving Time, but by refining your sleep hygiene for the season, you can give yourself an edge over the sunlight any day.

Janet Kennedy, founder of NYC Sleep Doctor and author of The Good Sleeper