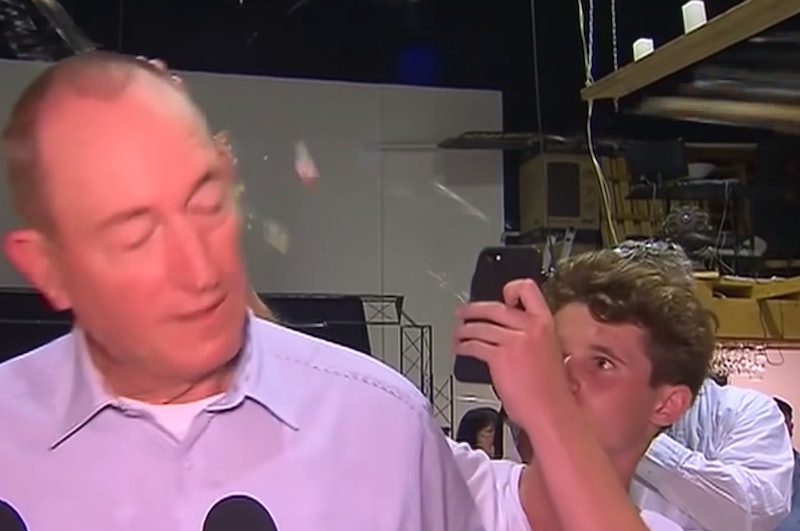 After his viral interaction with an Australian senator over the weekend, many people on social media have regarded him as a young — and unexpected — hero. The 17-year-old Will Connolly, more popularly known as "egg boy," will donate his GoFundMe funds to victims of the deadly New Zealand mosque shooting, according to CBS News on Monday. The GoFundMe page for Connolly currently states: "EggBoi [Will] plans to send a majority of the money to the victims of the Christchurch terrorist attack."

Connolly's GoFundMe was set up in the aftermath of an exchange he had with Australian senator Fraser Anning. Anning blamed Muslim migrants for the Friday attack on two mosques in Christchurch, New Zealand, which killed at least 50 people and left another 50 injured. In his statement after the shooting, according to Newsweek, Anning said that he was "utterly opposed" to violence and "totally condemn the actions of the gunman."

"However, whilst this kind of violent vigilantism can never be justified, what it highlights is the growing fear within our community, both in Australia and New Zealand, of the increasing Muslim presence," the senator added.

Anning's statement elicited outrage online, where many demanded that the senator be held accountable for his remarks. At a press conference in Melbourne on Saturday, one day after Anning's controversial comments, Connolly stood behind him and smashed an egg on Anning's head, instantly becoming a viral sensation.

In response to Connolly's egg-smashing, Anning proceeded to lunge at the young boy until other men around him tackled Connolly to the ground. The teenager was later on escorted out by the police and released.

Shortly after Anning's statement, Newsweek reported the Australian Prime Minister Scott Morrison condemned the senator's commentary, saying, "In his conflation of this horrendous terrorist attack with issues of immigration, in his attack on Islamic faith specifically — these comments are appalling and they're ugly and they have no place in Australia, in the Australian Parliament. He should be, frankly, ashamed of himself."

Morrison said that the Australian Parliament's Coalition and Labor would pass a resolution to censure Anning for his statement. According to The Washington Post, Morrison stated: "I would normally not want to give this any oxygen, but I want to absolutely and completely denounce the statements made by Senator Anning … on this horrendous terrorist attack, with issues of immigration, in his attack on Islamic faith specifically."

With his unique way of confronting Anning over his statement, Connolly has won fans around the world. One of them is an artist who drew a mural of the young lad in Australia.

Artist Van T Rudd shared a photo of his mural of "Egg Boy" on Instagram, which is shared above. "This mural just HAD to be done! A tribute to #EggBoy and his glorious response to Australian politician #FraserAnning ‘s support of extreme right wing terror," Rudd's caption read on Instagram.

"Solidarity with Muslims, refugees, migrants!" Rudd added. If you're in Melbourne and you'd like to see Rudd's artistic rendition of that viral moment between Connolly and Anning, head over to Hosier Lane.