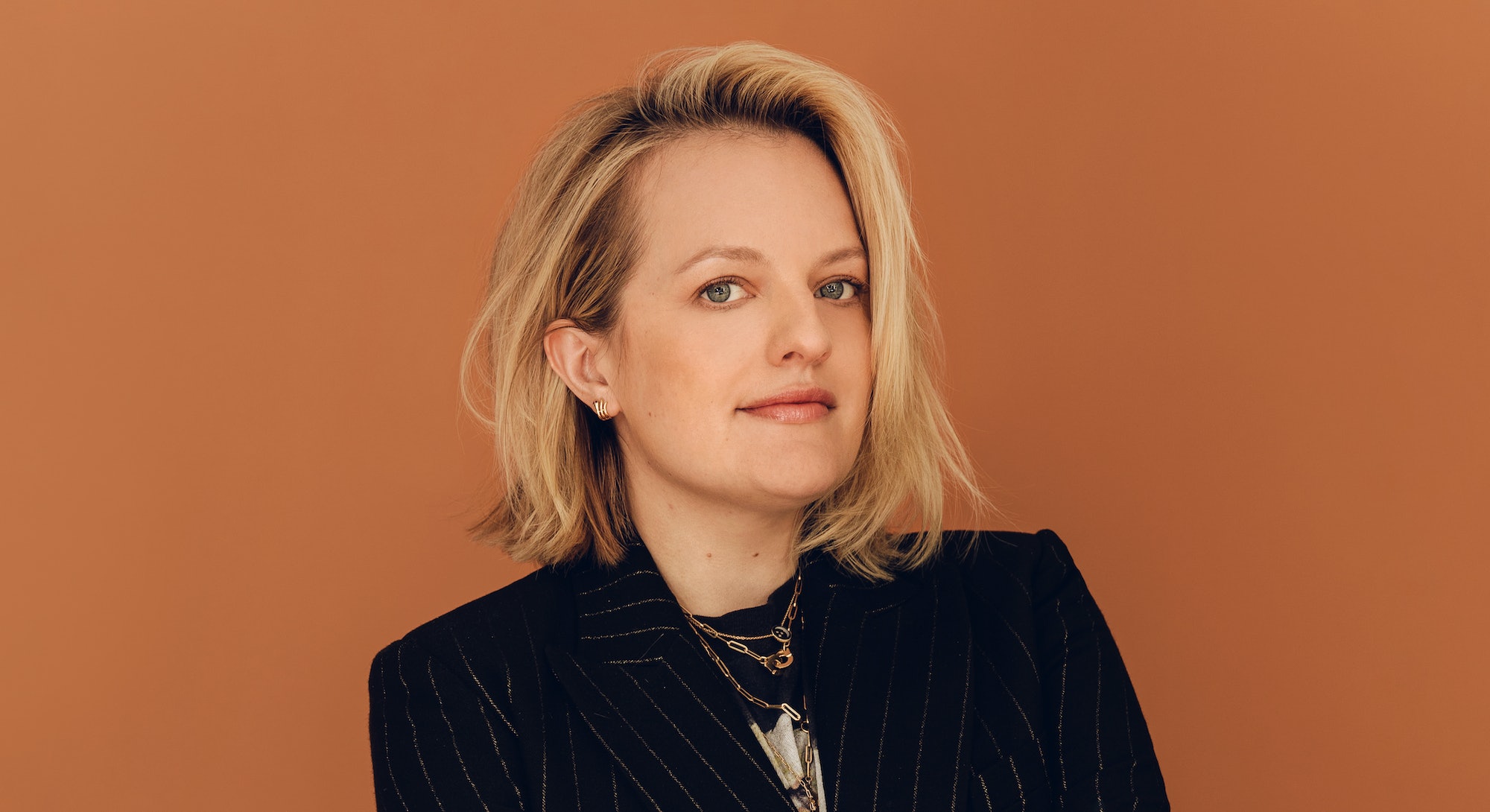 There’s a scene in Elisabeth Moss’ latest movie The Invisible Man, an update of H.G. Wells’ 1897 horror classic, that’s both haunting and a little bit on the nose. Sensing another presence in a dark attic, Moss’ character Cecilia throws the contents of a well-placed bucket of paint onto a ladder and the floor below, revealing the eerie white outline of a faceless man staring up at her. Her fear that a literal invisible man — namely, her abusive ex, who is supposedly dead — is stalking her is confirmed. The problem is that no one else witnesses this revelation, and Cecilia desperately needs proof that she’s not going insane. It’s a chilling parallel for gaslighting and emotional abuse that, in different hands, could have been just another monster movie starring Johnny Depp.

But this is an Elisabeth Moss movie, and more importantly, a classic Elisabeth Moss performance, right down to the runny mascara. The prolific, risk-taking actor who once told Vulture she has a “severe attraction to unplayable characters” is in her element as the tormented Cecilia, all unbridled rage and (rightful) hysterics. It’s a performance that surely was exhausting to capture on screen, and sitting in a Manhattan studio, Moss admits that she’s “so f*cking sick and tired.” Her delivery makes the sentiment sound less like a complaint and more like a conspiratorial secret: she’s nursing a cold and on her last day of a three-week press run, which may have worn her out as much as being dragged across the floor by a stuntman wearing a green screen suit. A water bottle filled with orange juice sits on the coffee table in front of us; she leans back to rest her feet on its edge. “Oh, thank God,” she says when I explain I’m going to grill her on the unseen and unsaid things in her own life. “I'd like to do something different.”

What's a role you didn't get that you still think about?

[laughs] Yeah, figure it out... and I remember walking into that audition for the one that should not be named, and there were so many beautiful actresses in there, everyone [looked] just amazing and skinny and gorgeous. And I was like, “I'm not this person, I'm not getting this.” And I got Mad Men, and then the other pilot ended up being canceled after I think, half a season.

Who's someone you wish you saw in leading roles more?

Merritt Wever — I think she's incredible. There's another actress, Marin Ireland, that I love... Michael Stuhlbarg is somebody that I think is always doing the best work. I definitely think he's somebody who should be starring in every movie. Connie Britton.

What’s something people don't ask you about that you wish they would?

I get asked so many questions, I feel like everyone covers everything! I guess the only thing that comes to mind is that, when you're an actor and you're the star of something, a lot of the attention goes on you as being the famous person and the person in the movie. But there's just so many people that [work on] a project that if they didn't do their jobs brilliantly, no one would give a sh*t about what I do, and no one would want to talk to me. Like, our focus puller on Handmaid's is like the most brilliant focus puller in the world. And, you don't understand — if I'm not in focus, we can't use [the take]. It doesn't matter what I do.

What's a road you didn't take that would have changed where you are today?

I wanted to be a dancer. For 10 years, I trained in ballet, from 5 to 15. I was definitely gonna do either one — that or acting. I really wasn't sure. You could've asked me at a certain age and I would have said I was going to be a dancer and not an actor.

Was there a definitive moment that made you choose acting over ballet?

Definitely. I think I didn't get into a school that I wanted to get into and that was a moment of like, “OK, I'm either gonna have to buckle down, work really hard, and try again… or maybe I should take a different path.” It's really heartbreaking and it's hard when you train your whole life and you have your goals and your mind set on a certain school or company and you don't get in.

I could have probably worked hard and waited and tried again but I was like, “You know what, maybe this is a good time to think about what I really want to do, and do I really want to spend the next year of my life making this my goal?” It was a big choice, but I think at the time it was also actually pretty obvious. Ultimately, I couldn't see myself not acting. And I could see myself not dancing, and that was the end of that.

And you would have been retired by now, probably.

That's what I was about to say. Now, at 37, if I hadn't gotten injured, if I had ended up being really good, if I had had all these things happen that are not under my control necessarily, I would maybe be nearing the end of my career. If everything had gone really well.

Do you go see ballet still?

I do, I go see New York City Ballet a lot. And ABT [American Ballet Theatre]. I still think it's the most beautiful thing.

What's one project you'd erase from your IMDb?

Oh God. I mean, none of them. Of course there are things that I've done that I'm more proud of than others.

Is there anything really silly that you remember being in?

You've never been in a Hallmark movie or something? That would be fun.

No, but I've been in a Lifetime movie. But they're all stepping stones, right? And they're all ways that you get somewhere. It's only been like the last like five, six, seven years that I've been able to be much more choosy and actually go for what I want and produce my own projects. Before that, I did what I got.

When is it OK to ghost someone or leave them on read?

I think when I do it is when I get super busy and focused on something. Sometimes, when I'm really in it on a project and there's a lot going on, I can be a little bit lax in returning [messages]. I try to with my closest friends and with my family, and obviously I try to make sure I check in.

What kind of texter are you? Are you a big responder, or a one-word answerer?

I don't love talking on the phone, so I love texting. I am a firm believer that you can text about anything. And I'm a very good emailer. I can email my thoughts pretty well. Sometimes when you're tired, the last thing you want to do is get on the phone, but you can write an email or text.

I think ghosting an assh*le is a totally fine thing to do, too.

I think sometimes ghosting is actually the right decision and it got a bad reputation.

I think you're in charge of who you want to communicate with, that's all.

What's a fashion choice you made that you would never redo?

Dr. Scholl's. The clogs, do you remember those? The clogs I was really into for a while, and I feel like they were brutally uncomfortable. I know what I'd never do — I've never really done Crocs. I just can’t get down with the Crocs. I work exclusively in Uggs [though], so I’m not a snob about it.

What’s a drink you would never order?

Sweet wine or sweet after-dinner drinks. Like, a dessert wine is disgusting. I love dry and I love things that have a bite to them.

What’s a food you refuse to eat?

Twitter, I can't do. TikTok, I don't understand what it is to this day. I feel like Boomerangs are gonna bite us in the ass, because we're gonna have all these tiny little videos and not know what to do with them. [With] Instagram stories, I have to have my assistant do them because I don't understand and it would take me an hour and a half to post something — there's too many options with the filters and stuff. I love it, but I get too excited.

I watch everything and I'm so not snobby about it. I would almost [say] a soap opera, but then I'm like, you know what? I could probably get down to soap operas. Like, why wouldn't you watch that? Apparently they're great.

I'm not a big news watcher. I read the news, but that 24-hour news cycle is so exhausting.

On Her Biggest Fear, And What Was Missing From Her Childhood

What is something that scares you that you can't see?

This is way more dark than you probably need, but I think losing people that you love.

My life is much more normal and much more moderate than people would think.

What’s a trait your partner should not have?

What’s something you wish people knew about you?

I think people think when you're an actor that you maybe have a fancier life than you do. And I definitely don't. [They think] that you drive around in fancy cars all the time, or wear fancy stuff. Like, these aren't my clothes [motions to her outfit]. Literally, this is my ring and that's about it. My life is much more normal and much more moderate than people would think.

What’s something you wish people didn't know about you that they already do?

There's nothing I wish people didn't know, honestly. I mean, I don't really care. There's also a lot of things people don't know, so I don't feel like I'm…

Yeah, I keep some sh*t private.

Which of the senses would you give up if you had to choose one?

I think smell, because I couldn't live without sight or sound, or — sorry, I shouldn't say that. I certainly wouldn't want to. Touch is really nice. So I think smell. It would suck, but if I had to.

What's something you feel like you missed out on growing up?

Did you ever play a role where your character had a locker?

Probably. But never for real.

What’s something you believe in that you can't prove?

Makeup by Daniel Martin at The Wall Group