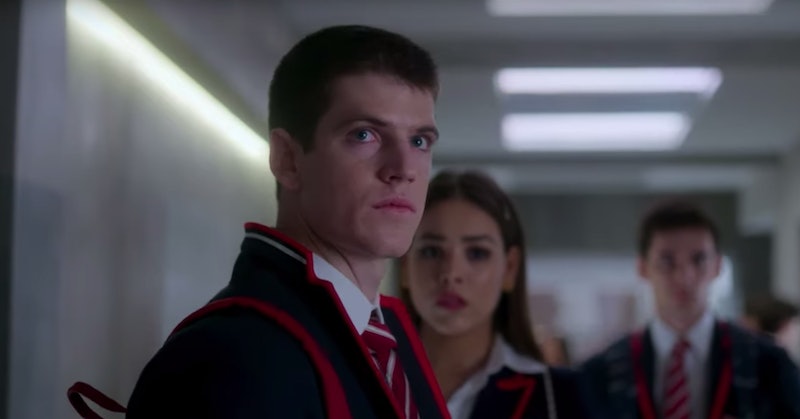 It's round two at Las Encinas High School. While Elite Season 1 followed the assimilation of scholarship winners Samuel (Itzan Escamilla), Nadia (Mina El Hammani), and Christian (Miguel Herrán) into the prestigious Spanish school and its most popular clique, the second season was all about resolving Marina's death once and for all. And the case of a certain missing teenager. For anyone who can't get enough of the murder teens, rest assured that Elite will return for Season 3, according to Variety.

The good news was announced in late Aug. 2019 at a Madrid press conference, per the same Variety article. "In the first season we were conscious that we were making a series for Netflix, and tried to put everything into it," Elite co-creator Darío Madrona said during the announcement. The article went on to explain that social media would be a large part of Season 2, since one of its new characters, Cayetana (Georgina Amorós), is a social media influencer. "[Cayetana is] apparently happy but has a lot of levels and isn't at all what she seems," Amorós told Variety.

That said, there's no set date yet for Elite Season 3; however, since Seasons 1 and 2 premiered in the fall of 2018 and 2019, respectively, it will likely be late 2020 before the series comes back. That's a long time to live without this murderous group of frenemies — so here's a list of other shows like it to watch before Elite's inevitable return.

O.K., so maybe this Norwegian series doesn't involve homicide, but that doesn't mean it's any less gripping. SKAM is an anthology of sorts, with each season focusing around a different teenager at the same high school in Oslo. SKAM is perhaps the TV show to best understand how teenagers interact — or fail to communicate, rather — and the methods they use to do so. And after the success of the original, there have also been American, Italian, and French spin-offs, among others (audiences can stream SKAM Austin on Facebook Watch).

This Spanish heist series stars Elite heartthrobs Miguel Herrán and Jaime Lorente as Río and Denver, respectively. What else needs to be said?

Before there was Elite, Riverdale, or Pretty Little Liars, there was Gossip Girl — one of the original teen mysteries. While Blair Waldorf (Leighton Meester) was perhaps a bit more likable than Lu (Danna Paola), it's impossible not to see the similarities between these two queen bees. And let's not forget all of those incredible outfits.

If for some reason you haven't watched the soapy, over-the-top teen drama Riverdale, now's the time. Virtually everyone in the small town is harboring a secret of some kind, and masked villains are a regular occurrence. In other words, Las Encinas could never.

In addition to the interviews that were interspersed throughout Elite Season 1, both shows are about rich people who become embroiled in a murder-mystery.

And while it's unclear when Elite Season 3 is coming, fans can rest assured that it's on the way. But until then, there's plenty of TV to help fill the void.