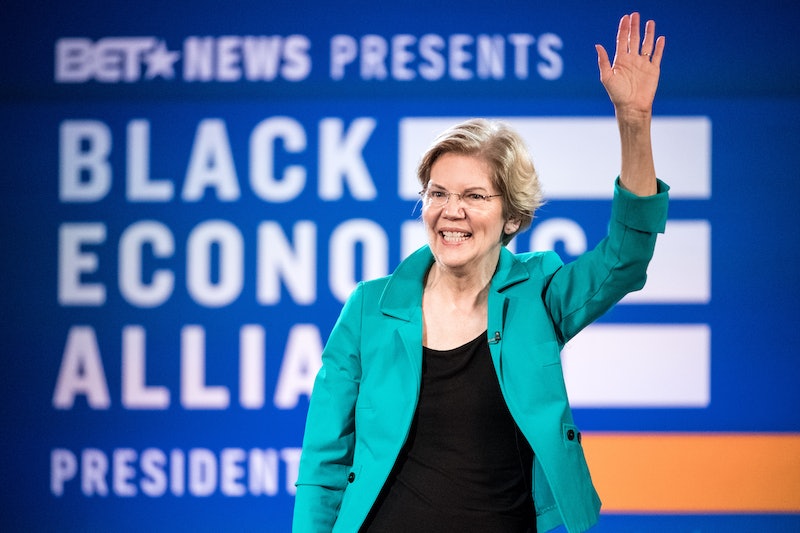 The concept of "electability" seems to have become a priority for some Democratic primary voters, with one Monmouth University poll suggesting Democrats might care more about a candidate's perceived electability than their values or policies. But what happens if you remove electability from the equation, and ask Democratic primary voters who they actually want to become president? Well, according to a new poll, Elizabeth Warren beats Joe Biden, Bernie Sanders and every other Democrat in the race.

The pollsters at Avalanche Strategy asked Democrats two questions regarding their candidate preferences in 2020. First, respondents were asked who they would vote for if the Democratic primary was held today — the standard "horse race" question. Then, Democrats were asked which candidate they'd choose if they had "a magic wand" that could single-handedly select the next president, regardless of elections or other voters.

In response to the "horse race" question, Biden came in first with 29%, followed by Sanders at 17% and Warren at 16%. But when respondents were given a hypothetical "magic wand" that allowed them to ignore electability and choose the next president themselves, Warren was the top pick, with 21% of respondents choosing her. Both Biden and Sanders came in at 19% when electability was removed from the equation.

The poll's findings strongly imply that women candidates are perceived as less "electable." Out of the respondents who chose a male candidate for the "horse race" question but a female candidate for the "magic wand" question, 24% said that they would change a candidate's gender in order to make them more electable. More to the point, 62% of respondents said that they don't believe America will elect a woman to the presidency.

That general conclusion is bolstered by a Daily Beast/Ipsos poll on the Democratic nomination released Monday. In that poll, 39% of Democrats and independents said that they think a woman would have a harder time defeating Donald Trump in reelection than a man, and 76% of Democrats said they believe gender and sexism played a role in Hillary Clinton's loss in the 2016 election. Additionally, 33% of Democrats and independents in the Daily Beast/Ipsos poll said that that they don't think their neighbors would be OK with a woman president. Incidentally, women were slightly more likely than men to say that a woman candidate would face steeper odds in beating Trump, the poll showed.

The concept of "electability" is highly controversial, namely because it's impossible to measure in any objective way. Throughout the 2016 election, Trump was almost universally perceived by Democrats and Republicans alike as unelectable due to his sexist comments, his paltry campaign infrastructure, his lack of experience in elected office or the military, and his poll numbers. But as Kyle Kondik at the University of Virginia notes, Ronald Reagan, Bill Clinton, and Barack Obama were all deemed "unelectable" before they were elected, too.

"[Democrats are] signaling to their most loyal voters that they must vote not for what they want, but for what they imagine their more-conservative neighbors might want," Alex Pareene wrote of "electability" in The New Republic. "But when voters in 2016 did exactly that, and nominated the candidate they were repeatedly told was most qualified to defeat Trump in the general election, they chose a person who went on to lose to him."

Nevertheless, Democrats are seemingly fixated on measuring and prioritizing the candidates' electability, at least for the time being. In a February poll from Monmouth University, 56% of Democrats said that electability is more important than values and policies, while only 33% said the reverse.

As for the Avalanche Strategy poll, Biden is the only candidate who loses support when voters ignore the concept of electability. In fact, the survey suggests that one-third of his support would evaporate overnight if he was no longer perceived as the most "electable" candidate in the race.