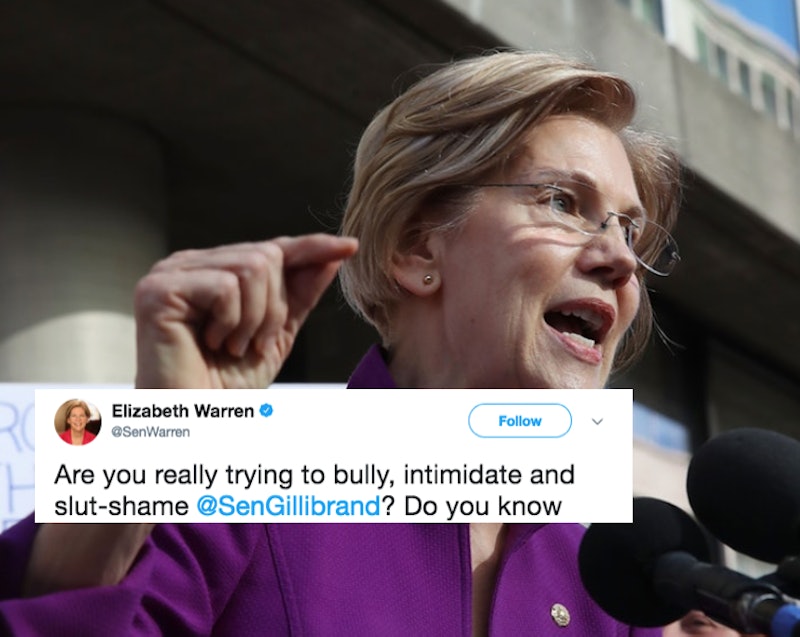 On Tuesday morning, President Donald Trump took to Twitter to dismiss allegations of sexual harassment against him and to call out Senator Kirsten Gillibrand for saying he should resign over the allegations. Gillibrand, Trump claimed, had come to his office "begging" for campaign contributions and would "do anything" to get them. Democrats quickly rushed to Gillibrand's defense, none more so than Sen. Elizabeth Warren, who accused Trump of "slut-shaming" Gillibrand.

"Are you really trying to bully, intimidate and slut-shame @SenGillibrand?" wrote Warren. "Do you know who you're picking a fight with? Good luck with that, @realDonaldTrump. Nevertheless, #shepersisted."

"Nevertheless, she persisted" was popularized after Senate Majority Leader Mitch McConnell used the phrase to silence Warren during a debate about then-attorney general nominee Jeff Sessions. The phrase was then adopted by the feminist movement and has since made its way onto t-shirts, coffee mugs, and even a children's book by Chelsea Clinton.

Trump's attack on Gillibrand came via an early-morning Tuesday tweet, in which he called her a "lightweight", a "flunky" and "USED":

Lightweight Senator Kirsten Gillibrand, a total flunky for Chuck Schumer and someone who would come to my office "begging" for campaign contributions not so long ago (and would do anything for them), is now in the ring fighting against Trump. Very disloyal to Bill & Crooked-USED!

The tweet came in the wake of a press conference in which three women (Rachel Crooks, Jessica Leeds, and Samantha Holvey) called for a congressional investigation into claims of Trump's past sexual misconduct. The women had voiced those accusations in the past but, in light of the growing #metoo movement, are now calling for more action.

Shortly after the press conference, Gillibrand called on Trump to resign via Twitter:

President Trump should resign. But, of course, he won't hold himself accountable. Therefore, Congress should investigate the multiple sexual harassment and assault allegations against him.

She was joined in her calls for his resignation by Sens. Cory Booker (D-N.J.), Bernie Sanders (I-Vt.), and Ron Wyden and Jeff Merkley (D-Ore.).

As many have noted on social media, Trump didn't attack the other senators, who all happen to be male. (Hawaii Democratic Sen. Mazie Hirono added her name to the list on Tuesday, calling on Trump to resign shortly after he attacked Gillibrand).

And though he's known for launching personal attacks on Twitter, his words for Gillibrand seemed to go a step further, with many arguing the phrases "used," "begged," and "would do anything for" are sexually suggestive. Gillibrand called the tweets "a sexist smear attempting to silence my voice" in a press conference, adding that neither she, nor the women who have accused Trump, will stand silent. Warren appeared to concur, arguing that the Trump tweet was meant to silence and intimidate Gillibrand.

It was likely Warren's use of the term "slut shame" to describe Trump that caught a lot of media attention. To give you an idea, women get "slut-shamed" for wearing dresses, or say, buying birth control. It's a way people try to silence women from expressing their sexuality in any way or for going against what society wants them to be. For one thing, it's likely never been used in this context before: a conversation between a Senator and a sitting U.S. President.

But the context and phrasing got attention, too — Republicans and social media users were quick to pounce on the tweet, arguing that "slut shame" implies that Gillibrand is somehow "guilty" of sexually provocative behavior. But as Scott Dworkin, co-founder of the Democratic Coalition Against Trump, noted, that's not entirely accurate:

Republicans trying to act like Sen Warren called Sen Gillibrand a slut shows how truly uneducated & ignorant they are when it comes to women’s rights. Slut-shame is a sociological term defined as stigmatizing a woman for engaging in behavior judged to be sexually provocative...