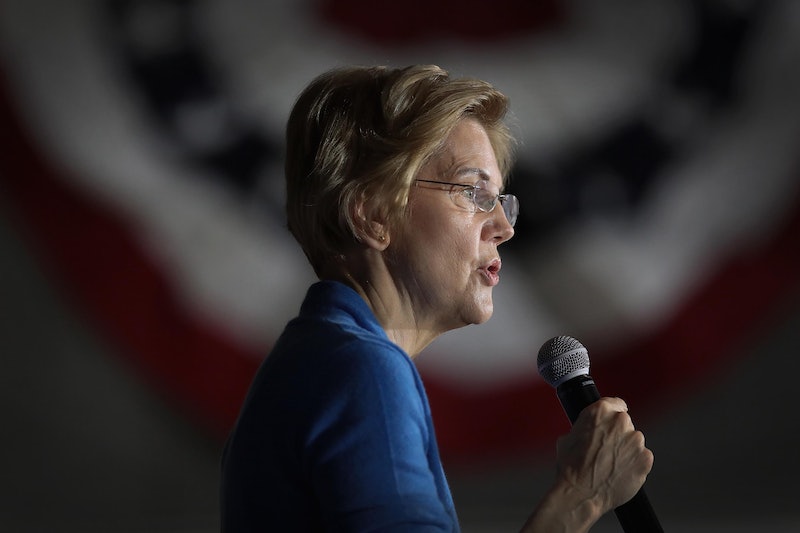 Presidential campaign season is not yet in full swing, but Democratic candidates are already taking swings at the president. On Sunday, Massachusetts Senator and 2020 contender Elizabeth Warren suggested Trump's 2020 campaign might not be an issue in the long run because, as she suggested, she's not sure it will even last that long.

“By the time we get to 2020, Donald Trump may not be president,” Warren told a voters at a Cedar Rapids, Iowa event, according to The Washington Post. “In fact, he may not even be a free person.”

Warren appeared to be referencing the ongoing investigations into Trump's administration, including both the Russia probe and those inquiries currently being led by committees within Congress. To be clear, Trump has not been accused of any crimes and has denied any wrongdoing. But the tensions between Warren and the president exceed any congressional investigations into Trump's business dealings or his 2016 bid for the presidency.

Specifically, Warren's remark comes one day after Trump's most recent jab at her family ancestry. The president has long cast doubt on whether or not the Senator is truly a descendant of Native Americans, as she has long said, and he doubled down on that skepticism on Saturday, the day Warren formally announced her campaign.

"Today Elizabeth Warren, sometimes referred to by me as Pocahontas, joined the race for President," Trump tweeted. "Will she run as our first Native American presidential candidate, or has she decided that after 32 years, this is not playing so well anymore? See you on the campaign TRAIL, Liz!"

Since stepping into the political arena, Trump has dubbed Warren with the nickname "Pocahontas," which many have criticized as a racist slur. On Saturday, he appeared to be using the topic to taunt Warren, while also musing about whether her claim to Native American ancestry has done her more harm than good. But on Sunday, Warren hit back at POTUS during her speech.

Of all the Democrats to declare their candidacies so far, Trump seems to have the most storied and publicly contentious relationship with Warren. If the two were to square off for the White House in 2020, it would definitely be an intense competition.

But there's a lot of time between now and the 2020 election, and whether that will ever happen remains entirely unclear. The pool of Democratic presidential hopefuls is widening all the time. In fact, Warren wasn't the only person, or even Democratic woman, to announce her campaign over the weekend. On Sunday, Sen. Amy Klobuchar formally revealed her 2020 plans, and the two Senators are among a long list of candidates. They include Sens. Kamala Harris, Cory Booker, Kirsten Gillibrand, Rep. Tulsi Gabbard, former Secretary of Housing and Urban Development Julián Castro, and South Bend Mayor Pete Buttigieg. As of February, it's impossible to tell who will eventually pull ahead.

As of Sunday afternoon, Trump has not yet responded to Warren's comments about whether or not he will stay in office until 2020.