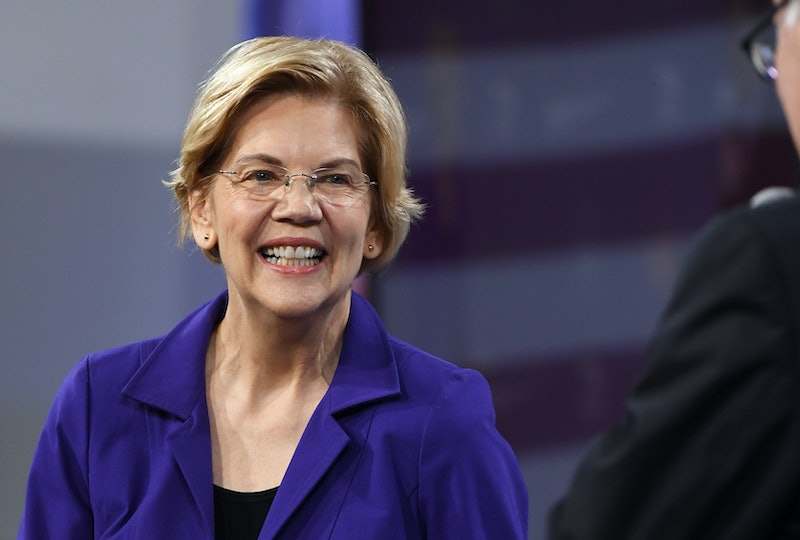 Forget charter school supporters or private school voucher advocates. If the Massachusetts senator were elected president, someone with first-hand knowledge of public education would be appointed to lead the Department of Education. In an email to supporters Monday, Sen. Elizabeth Warren vowed her education secretary nominee would be a former public school teacher, the Associated Press reports.

Warren, who according to The Philadelphia Inquirer is set to talk to members of the American Federation of Teachers union at a town hall later on Monday, made the commitment in an email that also criticized current Education Secretary Betsy DeVos and her team. "Instead of championing our students, they protect for-profit colleges that break the law and cheat them," Warren wrote in the email. Bustle reached out to DeVos through the Department of Education for comment.

Then came the pledge. "So I'm making this pledge to you: In my administration, the Secretary of Education will be a former public school teacher who is committed to public education," Warren wrote.

Warren included a link to a petition to replace DeVos with someone "who actually fights for our kids and the people who each our kids." The American Federation of Teachers will be endorsing a candidate in the 2020 presidential election and have laid out ground rules for how they will go about supporting their eventual candidate in a resolution.

American Federation of Teachers President Randi Weingarten said that she wants the union members to play a key role in the process. "I want candidates to be talking to not just our leadership but our members," Weingarten told New York Magazine. "I want them to be able to answer questions. And they will reveal themselves."

Weingarten has said positive things about Warren, even before her meeting with the union on Monday. After Warren released her policy plan on student debt and making college affordable, Weingarten released a statement in support.

Weingarten said the plan gives the "current generation a chance at financial health" while also funding public higher education to "never end up in this situation again." The debt crisis, Weingarten argued, has been particularly hard on teachers, many of whom must take out loans to fund their education.

"I hear from AFT members almost daily — from new educators who can’t stay in the profession because they’re defaulting on their loans, to experienced professionals who can’t retire because they can’t afford payments on their kids’ loans or are still paying off their own loans," Weingarten said in the American Federation of Teachers statement. "Teachers are taking on more student debt to be able to do their jobs and serve their students, and at the same time their wages are declining and the cost of their healthcare benefits is rising."

Weingarten has been in the news for criticizing income inequality in the past, an issue that's close to Warren's heart. After a new study by the Economic Policy Institute showed a lack of qualified educators in schools, Weingarten told Yahoo Finance that relatively low pay is part of the reason why.

"As the President talks more and more about how 'great' the economy is, and how Wall Street has soared and we are smack dab in the middle of a Gilded Age, there’s more and more anger about the inequity," Weingarten told Yahoo Finance.

According to The Philadelphia Inquirer, Warren's town hall with the American Federation of Teachers will be live streamed to their Facebook page Monday. You can already find videos from Sen. Amy Klobuchar's sit down with the group uploaded there.