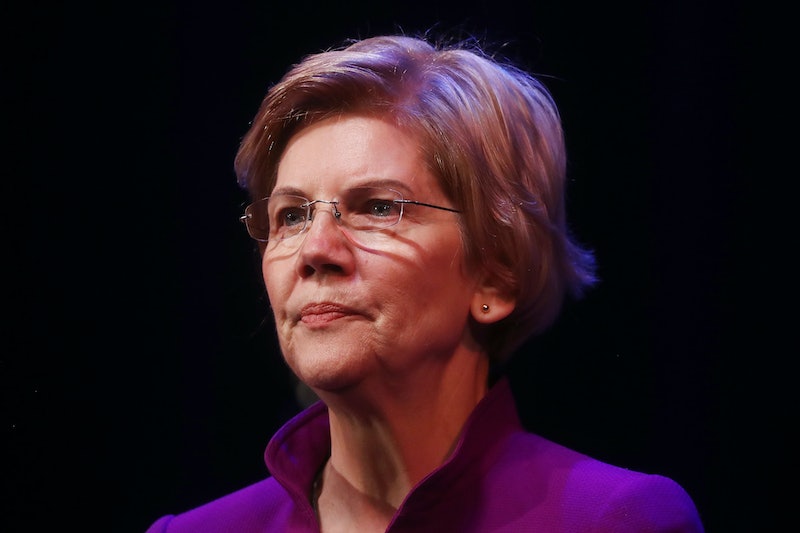 The state of child care in America is fraught with problems — and some lawmakers are seeking to fix that. On Tuesday, Sen. Elizabeth Warren unveiled her "Universal Child Care" program, calling it a "big, structural change" to provide the right to care for every child in the country.

The Massachusetts Democrat published a detailed write-up about her plan on Medium, saying that the federal government would work with states, nonprofits, and other organizations to create a solution for child care needs specific to their areas. The program would offer people with federally-funded licensed child care centers, which she said won't cost "more than 7 percent" of a family's total income. And, according to her post, it would be funded by her Ultra-Millionaire Tax proposal.

Warren's child care proposal comes more than a week after she officially announced her 2020 presidential bid in early February. "My plan provides the kind of big, structural change we need to transform child care from a privilege for the wealthy to a right for every child in America," Warren wrote.

According to Warren, child care in the United States is due for an overhaul. "There are two big problems with child care in America: it’s hard to find high-quality care, and where you do find it, that care is extraordinarily expensive," she wrote.

In her piece, Warren referenced research from the public policy organization, Center for American Progress (CAP), stating that 51 percent of all Americans live in "child care deserts," which are areas where licensed child care resources are inadequate. In rural parts of the country, this kind of dearth of child care is even more pronounced, according to CAP.

For those who can access child care, the cost of it is exorbitant, according to Warren. Citing an Economic Policy Institute study, Warren wrote that paying for child care can take up 9 to 36 percent of the average American family's total income. For single parents, Warren noted, it's even more challenging, as "the cost of center-based infant care can take up between 27 percent to 91 percent of the average income of a single parent."

In her Medium post, Warren drew from her own struggles as a working mother. She knew how difficult it was to access "affordable and high-quality child care" in the country, and after a series of unsuccessful tryouts with a babysitter, a neighbor, and several daycare centers, Warren wrote that she wept to her "Aunt Bee" over the phone that she couldn't find the right kind of child care. Left with no choice, Warren said she told her aunt that she was quitting her teaching job at a law school in Houston, Texas, to be with her kids, Alex and Amelia.

"Two days later, [Aunt Bee] arrived at the airport with seven suitcases and a Pekingese named Buddy  —  and stayed for 16 years," Warren wrote.

Still, some critics don't seem that impressed with the senator's proposal, including The Week's national correspondent Ryan Cooper. But if it is applied thoroughly, Warren's "Universal Child Care" program could help many parents, especially single working mothers, access child care for their young ones. In the long term, per Warren, such a bridging between resources and people's needs could shape the American economy for the better.

In fact, Warren noted that her "Universal Child Care" policy would improve parents' ability to work without worrying if their children are cared for, give children high-quality care (which studies claim can help young ones with literacy and cognitive learning), and boost the American economy. The Massachusetts senator called it a "win-win-win" situation.