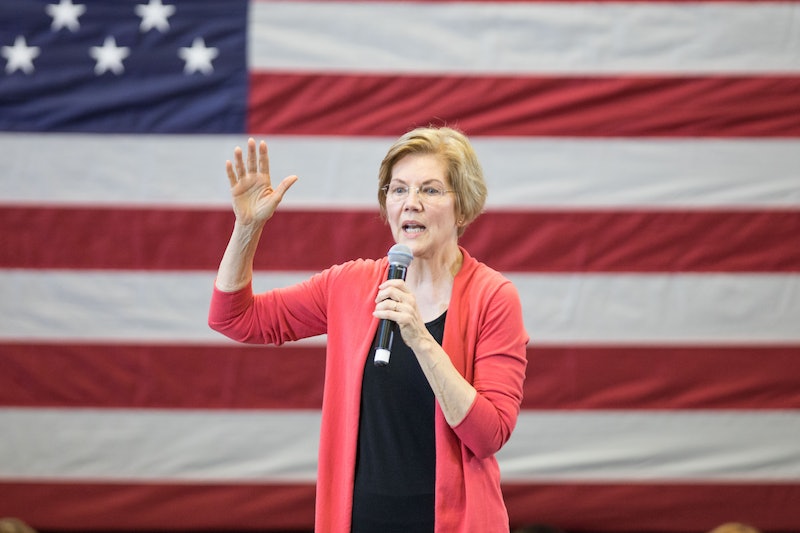 Higher taxes on the rich have been a calling card of progressives — even before Sen. Bernie Sanders promised to raise taxes during the 2016 Democratic primary. For years, the main focus has been on income tax rates, but now Sen. Elizabeth Warren announced a new wealth tax proposal that would target some millionaires and all billionaires for what they own and not what they earn.

Warren explained the tax proposal in a video uploaded to Twitter last week. She gave the example of a public school teacher and someone who inherited $500 million of "yachts and jewelry and fine arts." Currently, those two could be charged the same income tax if their income levels are about the same — even if their circumstances are very different. "That's a system that's rigged for the top," Warren says in the video.

Under Warren's plan, the "Ultra-Millionaire Tax" that she says would only apply to the "tippy-top," anyone with $50 million or more in assets would be charged 2 percent a year in the new wealth tax; billionaires would be charged 3 percent.

"It would make the ultra-rich pay their fair share and generate nearly $3 trillion over the next 10 years," Warren says in the video. "That's money we can invest in rebuilding the middle-class."

Two University of California, Berkeley economists, Emmanuel Saez and Gabriel Zucman, have advised Warren on the tax, The Washington Post reported. There would be increased funding for IRS audits and a certain number of of the ultra-rich would have to be audited every year. Anyone who had $50 million and decided to renounce their citizenship would be subject to a one-time penalty, too.

"The Warren wealth tax is pretty big. We think it could have a significant affect on wealth concentration in the long run," Saez told The Post. "This is a very interesting development with deep root causes: the fact inequality has been increasing so much, particularly in wealth, and the feeling our current tax system doesn’t do a very good job taxing the very richest people."

The top 0.1 percent of households in the country have seen their assets balloon in recent years. The University of Chicago's Booth Review reported that the richest of the rich have seen their wealth grow at far quicker rates than the rest of the country. The richer the group, the better they have done.

Steve Wamhoff, the director of federal tax policy at the Institute on Taxation and Economic Policy, told Bloomberg that this proposal will do far more than other recent suggestions, like Rep. Alexandria Ocasio-Cortez's plan to return the top income rate bracket to 70 percent. Some of the wealthy don't have a lot of traditional income but rely on income from business and other sources.

"If you believe that inequality is a problem, you have to start thinking outside the box," Wamhoff told Bloomberg. "We need to go beyond the ideas that are already on the table today."

Corbin Trent, communications director for Ocasio-Cortez, told CNN that their two policies could go hand in hand. "This is a question about how we reform our entire tax policy in this country to address two of the biggest challenges that we faced as a nation over the past thirty years, which are income and wealth inequality," he told CNN.

With Warren in the presidential race, these kind of ideas should get plenty of play between now and 2020.