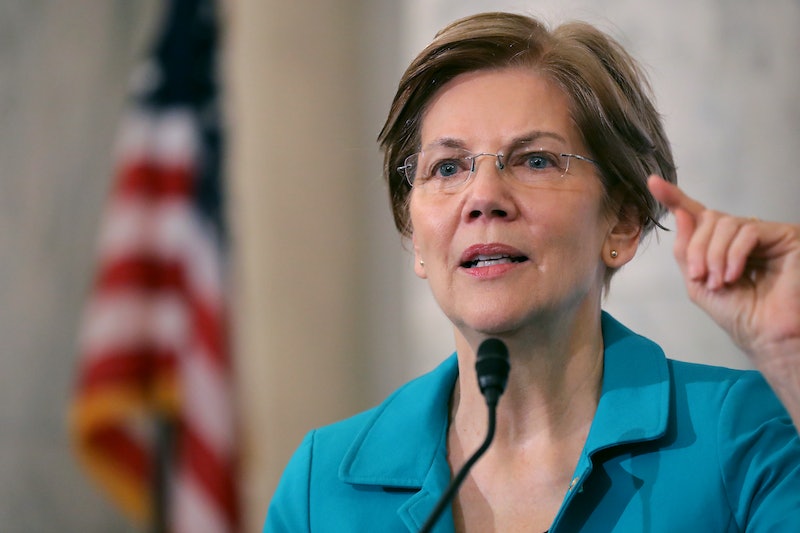 As the government shutdown drags into 2019, some 800,000 federal workers are still furloughed or working without pay — something one contender for the 2020 Democratic presidential nomination underlined Tuesday on Twitter. Sen. Elizabeth Warren will donate her salary during the shutdown to a non-profit until the government is reopened, she tweeted. She is one of a growing number of Democrats to do so.

"Over 7,000 people in Massachusetts have been sent home or are working without pay during the #TrumpShutdown," Warren wrote. "Until @realDonaldTrump re-opens the government, I'm donating my salary to @HIASrefugees, a nonprofit that helps refugees and makes our country stronger in the process."

Warren presented the donation as a way of showing solidarity with federal workers, noting the number affected in her home state of Massachusetts. Congress is still paid throughout the shutdown. The group she chose to donate to, HIAS, is a Jewish nonprofit that works to protect refugees, help with resettlement, and provide legal services.

Warren joins Democrats such as Sen. Catherine Cortez Masto of Nevada and Sen. Mazie Hirono of Hawaii, who both announced they would donate their salaries last month. Cortez Masto said she would donate to "a Nevada charity for every day of the Trump shutdown" in a tweet just after the shutdown began, and Hirono pledged to donate to food banks in Hawaii.

Tuesday's tweet was not the first time Warren has drawn attention to the way the shutdown affects workers. Her pinned tweet on Twitter, from Dec. 22, also notes the lack of pay for workers during the holiday season. "This shutdown was completely avoidable," Warren wrote. "Now, hundreds of thousands of federal employees will go without a paycheck over the holidays as @realDonaldTrump throws another temper tantrum over his stupid wall. Republicans’ latest attempt to divide and distract us."

Warren has kept up with the message ever since, tweeting links to stories in The Washington Post and BuzzFeed about the experiences of federal workers without pay — particularly during the holiday season. "So many of these #ShutdownStories are truly heartbreaking," Warren tweeted.

Warren kept tweeting about the shutdown and its effect on workers throughout the holiday. "This Christmas Eve, Bonita Williams should be wrapping gifts for her grandkids," Warren posted on Dec. 24. "Instead, she's worrying about how she'll pay her electric bill. The #TrumpShutdown is hurting hard-working Americans. @realDonaldTrump must end it."

Then on Dec. 28, Warren posted another attack on the shutdown, pointing to working families. "Our government is supposed to work for working families," Warren tweeted. "Instead: 25% of the federal government shut down. 380,000 workers sent home. 420,000 federal employees working without pay. Stop playing politics with people's lives, @realDonaldTrump. End the shutdown."

The shutdown, which is in its second week, does not seem closer to a solution. Trump invited Congressional leaders to the White House for a meeting on Wednesday afternoon. The topic on the agenda is "border security," though the exact points of the meeting have not been published.

Trump acknowledged the workers who haven't been paid when he spoke with Fox News for an end-of-year interview. "I spent Christmas in the White House, I spent New Year’s Eve in the White House," Trump told the network. "I’m here, I’m ready to go, it’s important. A lot of people are looking to get their paycheck."

Warren has used those paychecks as her main argument against the shutdown. There's no word yet on whether Trump is listening.