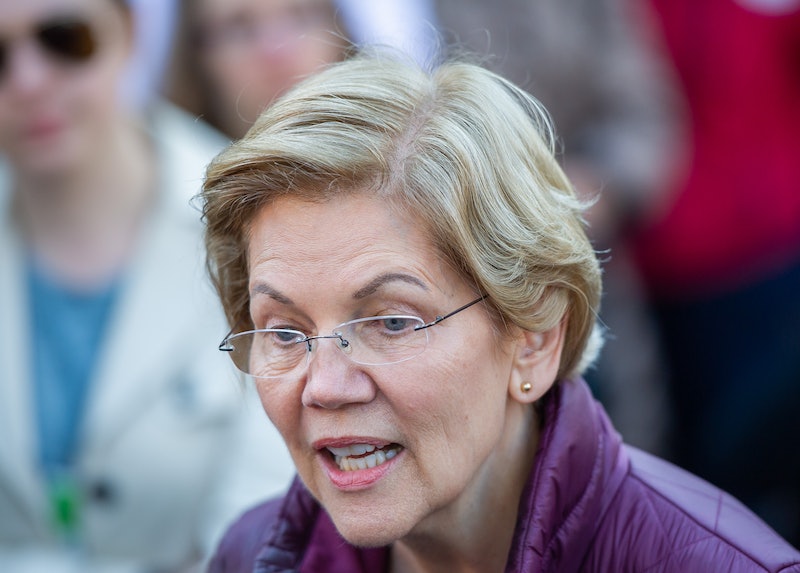 Following her withdrawal from the U.S. presidential race earlier this week, Elizabeth Warren made a surprise cameo on SNL during the cold open, in which she addressed her recent concession. "I'm doing just fine," she said when asked how she was by Kate McKinnon's Laura Ingraham. "My friends and family have been so supportive. They've been calling non-stop, asking 'Are you okay? What do you need? Were you electable?' That kind of thing."

Warren also commented on her looming endorsement of another candidate. "Maybe I'll just pull a New York Times and endorse them both," she joked, referring to the Times' endorsement of both her and Amy Klobuchar (neither of whom are still in the race).

Warren went on to say that despite having to drop out, she has no regrets about her campaign. She joked that she's proud that her team was able to build "a wide coalition of teachers, preschool teachers, middle school teachers, and teacher's pets."

"But now I've got time to do a little self care," Warren continued. "Hanging out with my dog Bailey, prank calling big banks, drag racing Subarus, avoiding Twitter," she emphasized at the end.

The skit also featured Warren meeting her Saturday Night Live counterpart, who is of course also played by McKinnon. McKinnon did a quick outfit change from her Ingram persona to her Warren one, and ran out to give Warren a hug. "Sorry, I just wanted to put on my favorite outfit to thank you for all that you've done in your lifetime," McKinnon said.

"I'm not dead," Warren clarified to McKinnon. "I'm just in the Senate."

It's fitting that Warren joked about avoiding Twitter, as the reactions to Warren appearing on the show are mixed. Some criticized her for making light of the elections and the issues at hand by going on the show before she's officially endorsed a candidate, while others were heartened to see the senator in good spirits after she dropped out.

This is not the first time a well-known politician has appeared on Saturday Night Live. Everyone from Barack Obama, Al Sharpton, Sarah Palin, and Donald Trump have cameoed on the show. More recently, Hillary Clinton featured in a 2015 skit with McKinnon, who impersonated Clinton while Clinton pretended to be a bartender listening to her woes. A more pensive skit, the two had an earnest conversation about both Clinton's shortcomings and the undue criticism she received.

With the Democratic primaries being as contentious as they are, Warren will likely continue to field both praise and criticism for a while. Still, if Warren ever wants to have her own bartender heart-to-heart skit in the future, surely McKinnon will be more than willing to lend an ear — and one more impersonation.