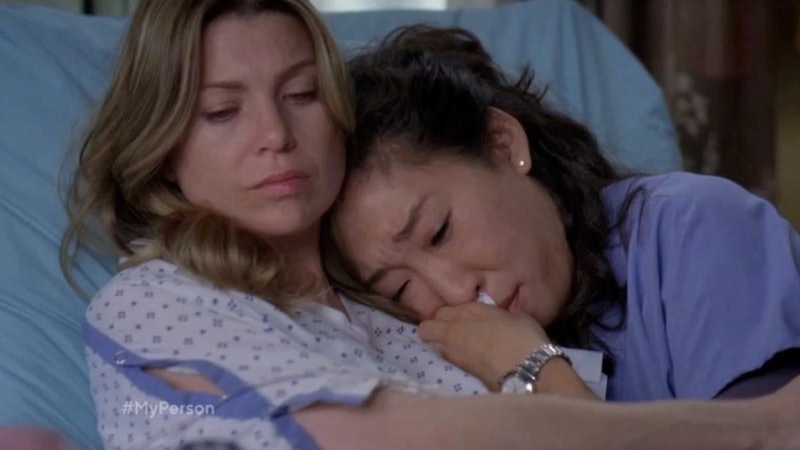 One of the reasons why Meredith Grey and Cristina Yang's friendship resonates so strongly with Grey's Anatomy fans is because they're always there to support one another, in both good times and bad. Whether they're dancing it out or hugging it out or simply sitting there quietly together, they share a bond that can never be broken. The same can be said for their real life counterparts and Ellen Pompeo's comments about Sandra Oh's SAG Awards win proves just as much and will warm the cockles of your Grey's Anatomy-loving heart.

On Sunday night, Jan. 27, Oh won the Screen Actor's Guild Award for Best Female Actor in a Drama Series for her portrayal of Eve Polastri in Killing Eve. It was a victory that was more than well deserved and Pompeo couldn't resist taking the time to congratulate her dear friend on Twitter for this outstanding accomplishment. In fact, she proceeded to revel in her former colleagues skill set and how talent she's been from the very beginning of her career.

"Since Arliss @IamSandraOh has been a girl you cannot take your eyes off of when she’s on screen... her skill is hard to put into words but man these accolades are sooo deserved," Pompeo wrote on the social media site. "Absolutely thrilled for this talented woman."

For those unfamiliar with what Arliss is, it's a comedy series that ran for a total of 80 episodes from 1996-2002. Oh played the part of Rita Wu. The fact that Pompeo is harkening back to something so long ago just further confirms how much she respects Oh and believes that all of these honors she's receiving this year has been a long time coming.

Of course, this is just one example of how Pompeo has shown her support for Oh this year during awards show season. Earlier this month, Pompeo took to Twitter to celebrate Oh's Golden Globes win for Best Actress in a TV Drama, stating that no one deserves the honor more. "This is a pretty sweet sight I gotta say," Pompeo tweeted out on Tuesday, Jan. 8. "@IamSandraOh no one deserves this more."

Both of these instances may seem like small gestures, but Grey's Anatomy fans can fully appreciate what they are meant to represent. These two didn't just have each other's backs on the small screen — they're there for one another in real life as well and are basically the nonfictional version of Cristina and Meredith. Oh and Pompeo may have parted ways back in 2014 after Cristina's departure from Grey's, but that doesn't mean they can't still be each other's person from time to time.

Granted, this isn't the first time Oh has taken home a SAG Award in the past (she won for her role as Cristina Yang back in 2005), nor will it probably be the last, so fans can probably expect a lot more sweet messages like this in the future. The Year of Sandra Oh is only just getting started.

More like this
Why Was Sandra Oh At The Queen's Funeral? She Represented Order Of Canada
By Radhika Menon
'Grey's Anatomy's New Intern Got Advice From Dr. Bailey Herself
By Grace Wehniainen
Paul Mescal, Man Of Mystery
By Samantha Leach and Heather Hazzan
The 'Reasonable Doubt' Cast Includes A 'Save The Last Dance' Reunion
By Grace Wehniainen
Get Even More From Bustle — Sign Up For The Newsletter