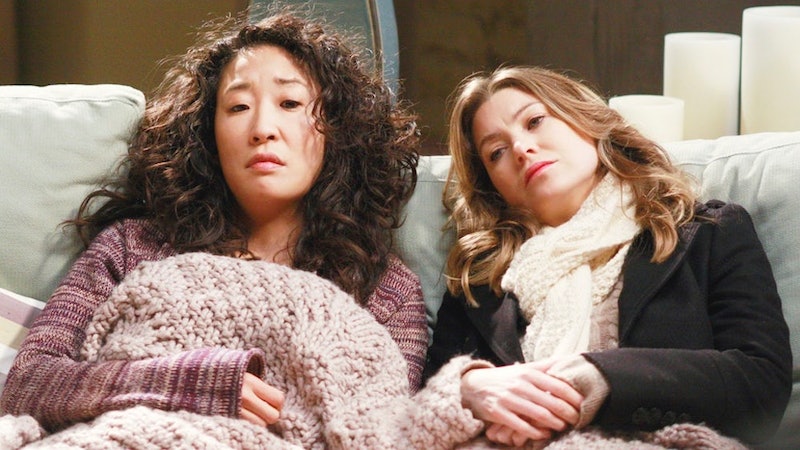 Meredith Grey and Cristina Yang may no longer be sharing any screen time together, but their real-life counterparts still have nothing but love for one another. So it should come as no surprise that Ellen Pompeo's response to Sandra Oh's Golden Globes win for Best Actress in a TV Drama on Sunday night showcased their close friendship and proved that these former Grey's Anatomy costars are still each other's person even after all this time.

Of course, Pompeo wasn't the only Grey's cast member to congratulate Oh on her outstanding (and very well deserved) achievement for her role as Eve Polastri in BBC America's Killing Eve. Numerous actors from the show took to Twitter to extend their support and state how happy they were for her. But let's be honest — Pompeo's message was the one fans were most anxiously waiting for, given the iconic friendship these two emulated on-screen for nine years. You always want to believe that your favorite characters on TV are best friends in real life as well, and in this case that proves to be true.

Fans may no longer get to witness Meredith and Cristina's undeniable chemistry on Grey's, but it's at least comforting to know that part of that dynamic still lives on.

"This is a pretty sweet sight I gotta say," Pompeo tweeted out on Tuesday, Jan. 8. "@IamSandraOh no one deserves this more." The message may have been short and sweet, but the sentiment speaks volumes to Grey's Anatomy fans. Regardless of how much time goes by, these two will always have each other's backs.

Oh left the medical drama in 2014 in the hopes of pursuing other opportunities as an actor, which ultimately led her to Killing Eve. So as painful as it was to watch Cristina go, it seems Oh made the right decision to exit when she did. Otherwise fans never have found their latest thriller obsession, and Oh might have never found this Golden Globe. It doesn't make us miss Cristina any less, but it only helps to prove what we've known all along: Oh's talents truly know no bounds.

However, this isn't the first Golden Globe win Oh has ever received. She nabbed one for playing Cristina Yang all the way back in 2006 and you don't need to be an MI5 analyst like Eve to know that there are bound to be many more accolades in Oh's future. And you better believe Pompeo will be there rooting for her the entire way. It's what Cristina and Meredith would want, after all.

There are a lot of Grey's Anatomy duos that have gained an impressive fandom over the years, but these two women are without a doubt the strongest pairing of them all. (Sorry McDreamy fans, but you know it's true.) Oh may never return to Grey's Anatomy, despite our many outcries for her to do so, but at least that friendship continues to exist in some capacity, minus the medical scrubs and complicated surgeries. And when push comes to shove, there's quite honestly no better diagnosis than that.