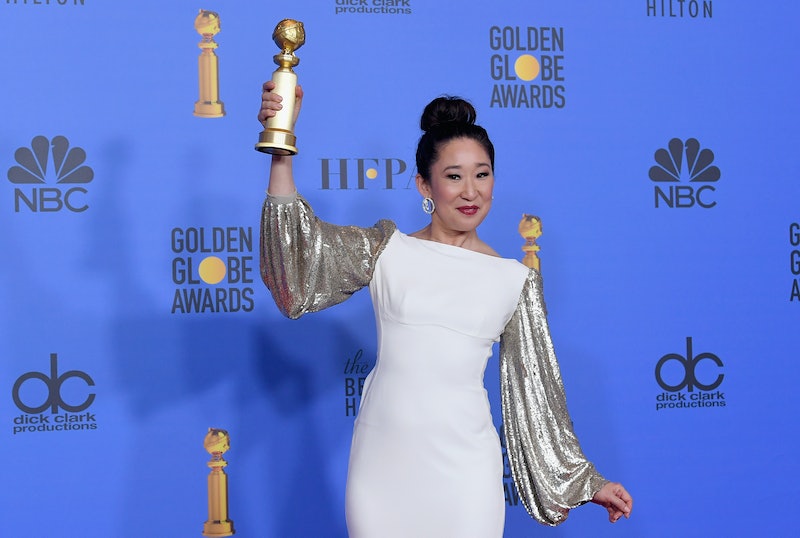 Long live Dr. Cristina Yang. While she stepped away from her role on the iconic show nearly five years ago, Sandra Oh got major support from the Grey's Anatomy cast for her epic Golden Globe win on Sunday, Jan. 6. The 76th annual show was really Oh's night, as she not only killed it as the co-host but took home her well-deserved statue. And after all this time, her own Grey's family couldn't be prouder.

Oh won the Golden Globe for Best Actress in a TV Series Drama for her role in the BBC America hit series Killing Eve. Between her poignant statement on progress in the opening monologue and her heartfelt acceptance speech, Oh really stole the show. Following the ceremony, Oh made headlines like, "Sandra Oh Wins a Golden Globe—And the Night" and "Sandra Oh Celebrates ‘Moment of Change' During the Golden Globes, Becomes President." While she's no longer on Grey's (which is in its 15th season), it's easy to see why her former TV family rushed to celebrate her victory.

Like fans, Oh was crushed when she left Grey's in 2014 after Season 10. Clearly, there are no hard feelings from creator Shonda Rhimes or the cast, and if anything, it's the complete opposite. Rhimes tweeted twice on Sunday night in support of Oh's win, calling her the "best actress."

Kate Walsh, who left Grey's as a main character for the spin-off Private Practice in 2007, also showered Oh with praise, deeming her former co-star a "legend."

Camilla Luddington, who's been on the long-running series since 2012, congratulated Oh with all the exclamation points:

And Kevin McKidd, who played Oh's husband on Grey's, showed his former TV wife so much love:

Even at the time of walking away from the show, it was completely bittersweet for Oh, who played Dr. Yang for 10 seasons. While she told The Hollywood Reporter that she "came apart" leaving the series, she also said she was excited for more opportunities in store (which she obviously seized). "I want to be as open as possible to anything that comes," she said.

While getting continual support from the Grey's crew, Oh is fearlessly blazing trails in Hollywood. Killing Eve debuted last April and has made substantial impressions on audiences and critics alike. The show received two Emmy nominations in 2018 (one for Oh for Outstanding Lead Actress and one for executive producer Phoebe Waller-Bridge for Outstanding Writing). Killing Eve also won Outstanding New Program at the Television Critics Association Awards.

Beyond the Grey's cast, Oh also won over viewers, who showered the actor with love. Twitter user @ellemarr wrote: "My heart is so full watching @IamSandraOh win for @KillingEve! What a beautiful speech and moment for Asian-Americans and SANDRA! That woman." And journalist Maureen Ryan (@moryan) tweeted, "So glad Sandra Oh won. So glad her parents were there to see it... that was a moment of unforced joy and excitement that made me feel good & made me a bit teary. Also her gown was great. #win."

After winning the hearts of her many fans for years, Oh can also enjoy the reward of getting love from her viewers and former colleagues in addition to that shiny award.