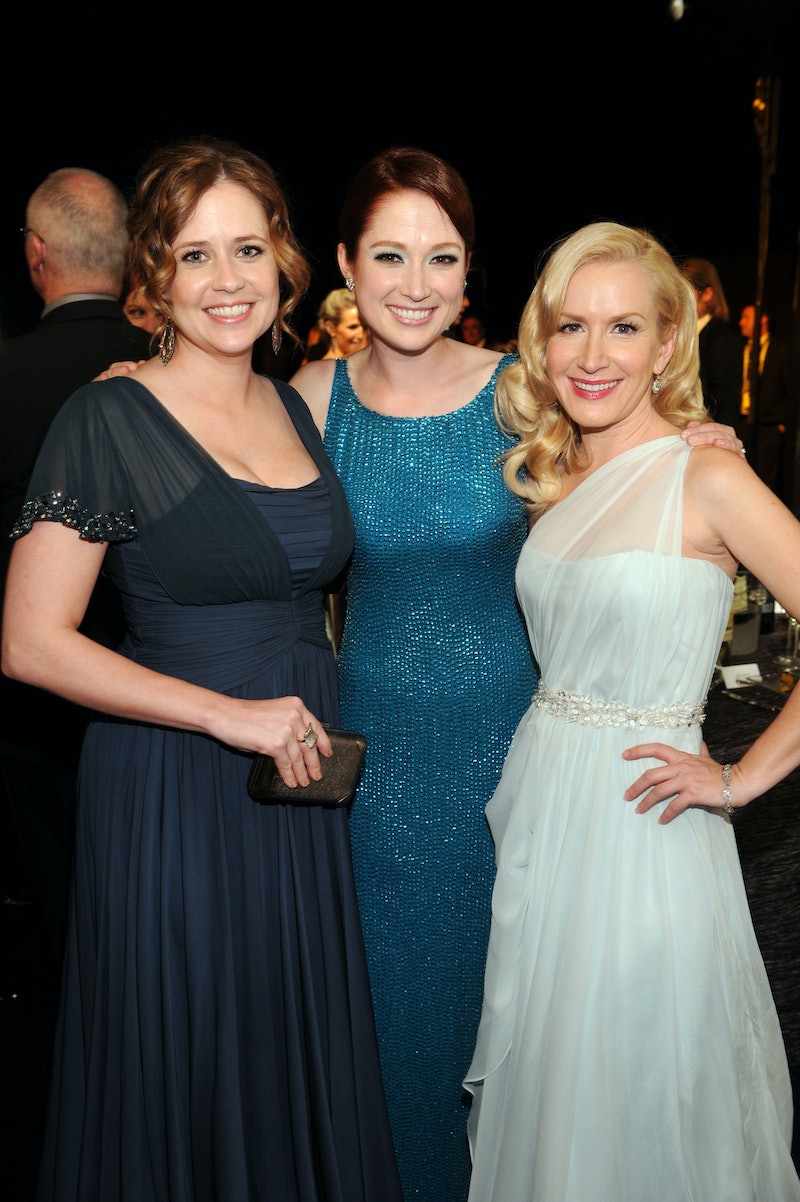 Fact: when you get three members of the Office cast together, you're morally obligated to discuss the possibility of a potential reboot. Which is exactly what happened when Office stars Jenna Fischer, Angela Kinsey, and Ellie Kemper reunited on The Ellen DeGeneres Show this week. But while Kinsey and Kemper are more than willing to bring the Dunder Mifflin gang back together again, Fischer still needs a little more convincing on the matter.

The topic was initially broached by Kemper, who served as a guest host for the show, shortly after she welcomed Kinsey and Fischer onto the stage to discuss their recently launched podcast, Office Ladies, where the duo break down a different episode of the series each week and discuss it amongst themselves along with some of their fellow Office costars. Given how immersed Kinsey and Fischer have remained within the Dunder Mifflin world, Kemper asked the question on everyone's mind: would they be interested in rebooting the show?

“I would not do an Office reboot,” Fischer responded. “But I would love to do a reunion special episode. I’d like to get us all together again.” However, both Kinsey and Kemper didn't seem to share Fischer's hesitancy for a full-fledged reboot, admitting that they'd be game for anything and everything NBC would want them to do. “I would do anything they called me to do,” Kinsey said. “So if you want to call me, I’m around.” Kemper echoed that sentiment, stating, “I’m with you, Angela! I will be there. So Angela and I are rebooting The Office!”

But, of course, this isn't the first time fans have been teased about an Office revival. Back in September, NBCU's Chairman of Direct-to-Consumer and Digital Enterprises, Bonnie Hammer teased to Deadline that the network's new streaming platform would be an ideal place to have an Office reboot. “It is my hope and goal that we do an Office reboot,” Hammer told the outlet at the time.

The remark came on the heels of the news that The Office would be leaving Netflix in 2021 and take up residence on the NBCUniversal streaming service. “The Office comes back to us in January 2021. It is my hope that we can figure what that great reboot would be,” Hammer added. “We are having conversations.”

Yet despite those hopeful comments and enthusiasm from Kinsey and Kemper, not every cast member thinks bringing the show back would be a good idea. During an 2018 interview with Esquire, Carell admitted he doesn't think an Office reboot would work in this day and age, feeling it would be too offensive in this #MeToo and #TimesUp era. And while he has a valid point, it's difficult not to get excited over the prospect of seeing the cast reprise their characters, even briefly.

Maybe if former stars like Kinsey and Kemper continue to express their interest in the matter, everyone's favorite paper company will live to see another day.