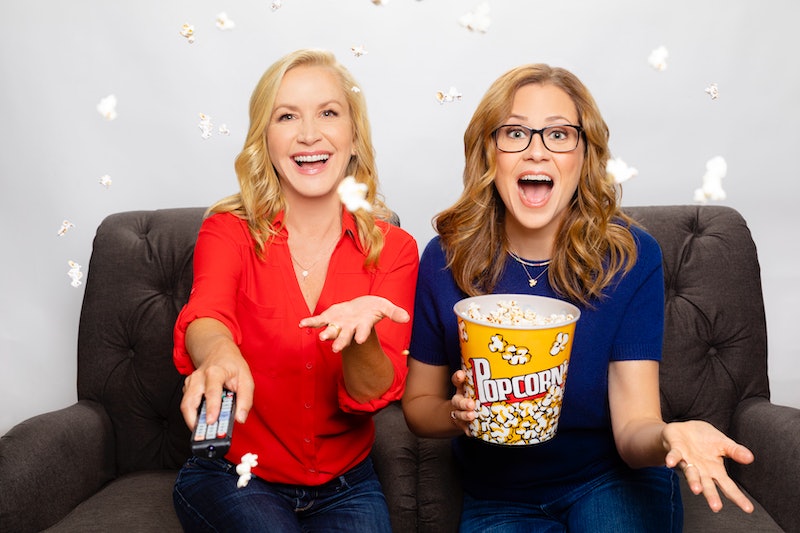 It's not quite the Finer Things Club, but it's close. Angela Kinsey and Jenna Fischer are starting a new Office podcast that will make fans want to rewatch the show again. As if any of them needed an excuse.

The real-life besties are launching a Stitcher podcast called Office Ladies that is going to be a real nostalgia trip, per a press release. Each episode of the podcast, which debuts Oct. 16, the twosome will rewatch an episode of The Office and break it down for fans. Fischer and Kinsey will also share behind-the-scenes stories and answer fan's questions. It's basically an Office obsessives dream, but it's also going to be fun for the two former stars of the show.

“So many memories are flooding in as we go back and watch the episodes – many of which I haven’t seen since they aired," Fischer, AKA Pam Beasley said in a statement. "As we close in on the 15th anniversary of the show, it seemed like a great time to share our stories and behind-the-scenes trivia with fans."

But, it won't just be about The Office. Fischer promised that fans will "also hear us chat a little about our lives, our Target runs together, our friendship through the years. It’s a lot of fun.”

Kinsey agreed, stating that “The Office was such an amazing chapter of our lives and it means so much to us that we get to share some of our memories of filming it with our audiences." She seconded that there will be as much behind-the-scenes Office talk as "just being BFFs" gossip. "So come on! What are you waiting for?" Kinsey said in a statement. "Snuggle up next to me and Jenna on the sofa and let’s rewatch The Office together!”

Let's assume fans won't need to be asked twice. In the years since The Office went off the air, the show has become a hit for its rewatchability. It's like the best comfort food, which is why all that snuggling Kinsey talked about makes sense. Who doesn't need a nap after a good meal?

The happiness this show brings to so many is why the cast is constantly asked about whether there is an Office revival in the works with the OG stars. There isn't, but Fischer has said that she would be interested in playing Pam again.

"I loved playing that character and as long as Greg Daniels is the person in charge and the visionary behind it, then I would absolutely be up for it," she told The Hollywood Reporter last year. "We just have to get Mindy [Kaling], B.J. Novak, Gene Stupnitsky and Lee Eisenberg, Mike Schur to write some episodes. That show was so great because of the talent involved behind the scenes, not just on the screen."

For now, fans will just have to rewatch old episodes of The Office and be happy that Kinsey and Fischer are working together again. And who knows, maybe they'll be able to coax other members of their Dunder Mifflin family to join them on the podcast.