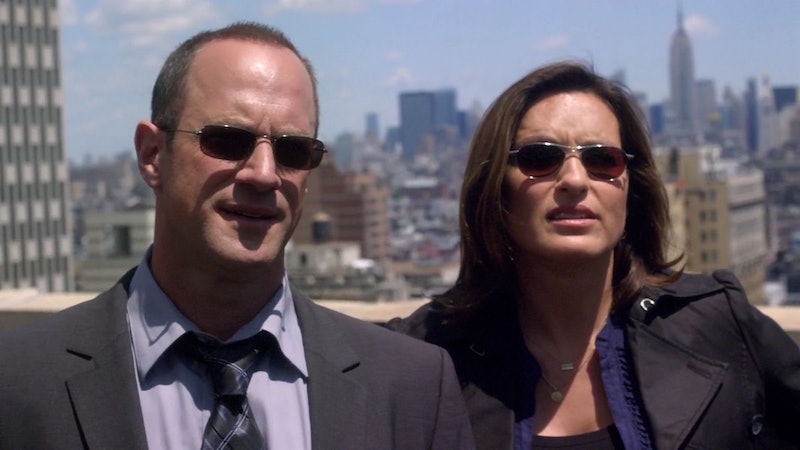 Detective Elliot Stabler is back. Christopher Meloni will reprise his role as Elliot Stabler in NBC’s Law & Order: SVU spinoff, per a Deadline exclusive published on March 31. NBC has ordered 13 episodes of the untitled crime drama from SVU mastermind Dick Wolf. Set to center on an NYPD organized crime unit led by none other than Stabler himself, the spinoff will mark Meloni’s return to the SVU universe after his Season 12 departure in 2011.

Wolf, Arthur W. Forney, and Peter Jankowski will executive produce the drama, and former Chicago PD showrunner Matt Olmstead is being considered for head writer and showrunner, per Deadline. The spinoff will join Wolf’s six other scripted shows currently on the air: NBC’s Law & Order: SVU, Chicago Fire, Chicago PD, Chicago Med, CBS’ FBI, and CBS’ FBI: Most Wanted. As for SVU, the show is currently in its 21st season and serves as the longest-running primetime live-action TV show in American history. Bustle has reached out to Meloni for comment on the news.

Since the spinoff will be set in New York, a crossover episode with the original Mariska Hargitay-led crime series is definitely possible. As one of TV’s most popular fictional duos, an Elliot Stabler and Olivia Benson reunion would certainly bode well with SVU enthusiasts. On Twitter on Tuesday, fans celebrated Stabler’s upcoming return.

Meloni’s departure from SVU in the Season 12 finale came in the form of Stabler’s retirement from the police force. Since his exit, Meloni has starred in Syfy’s Happy!, Fox’s Surviving Jack, HBO’s True Blood, and Hulu’s The Handmaid’s Tale. In an interview with Variety in 2017, Meloni reflected on his SVU stint and the “exposure” the series has afforded him. “God bless Dick Wolf and the exposure SVU got me,” he said. “I never sniff or sneer at that, and I think that’s gotten me where I am.”

He’s still on good terms with his co-stars, too. Ahead of the show’s historical Season 21 return, Hargitay shared an SVU reunion with Meloni on Instagram last September. She captioned the selfies, “Sunday night dinner....” At the time, SVU showrunner Warren Leight may have foreseen Stabler's return to TV, too. Leight told E! News of the possibility of Stabler's return to the series, “As long as the show is running, I feel like we will — someday, I would hope to see him again. I don't know how, I don't know when, but... I think the fans and Benson and Stabler are owed that."