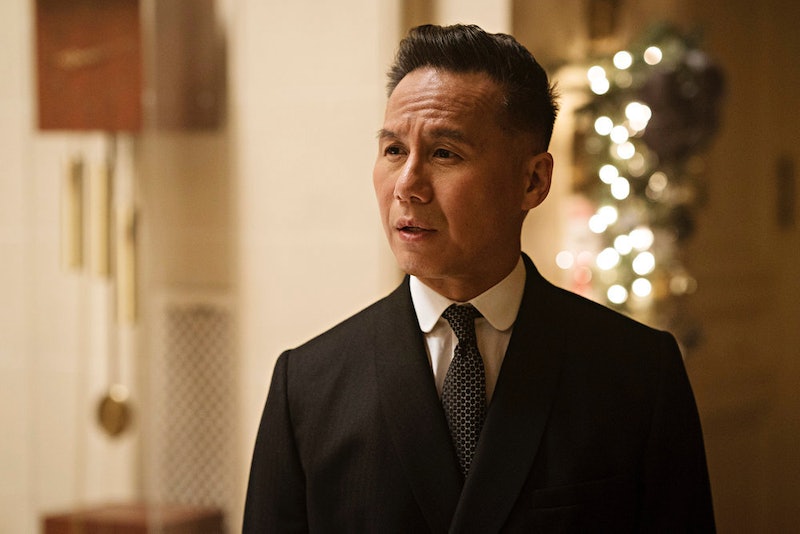 In the aftermath of the game-changing, earth-shattering revelation that Edward Alderson wasn't the charming, genial father Elliot's compromised memory had made him out to be — but rather a predator who had sexually abused his own son — Mr. Robot viewers also learned the true purpose of the figure we know as Mr. Robot. Elliot's mind split as a way to cope with the unthinkable trauma inflicted on him by his father, and Mr. Robot was manifested in order to protect Elliot from this truth. It was Mr. Robot who made Elliot forget his childhood abuse, and it was Mr. Robot who constructed the elaborate fantasy sitcom world to shield Elliot from the beating he took in prison in Season 2, among other instances.

But if Mr. Robot's role is "protector," then what is the role of Elliot's undisclosed third alter ego, revealed earlier in the season? What purpose does this other manifestation serve? And what has it been up to all this time, unseen by both Elliot and the audience? Is it possible that "the other one" hasn't just been lurking in the background and biding its time, but actively participating in and manipulating the events of the series without Elliot's knowledge? Could Elliot's third personality and Whiterose be in cahoots?

That's the theory put forth by Reddit user L0rd_nikon, who posits that "Elliot and [Whiterose] have been working together since day one," which is why the Dark Army has let this thorn in her side live for so long: for every action Elliot takes to thwart her, his alter ego works to undermine that action and further Whiterose's cause. Two steps forward, two steps back; an internal game of tug-of-war that Elliot doesn't even know he's playing.

If this theory is true, then Elliot's three personalities are together primed to manipulate pretty much every other character in the show, with each distinct personality being suited to play off the emotional responses of its targets. "Hero Elliot," as L0rd_nikon refers to the protagonist, handles most of the day-to-day interactions, dealing with his sister, Darlene; his therapist, Krista; and even his imaginary friend, us, the audience. He's responsible for "manipulating" us, for showing the audience exactly what he wants it to see.

Meanwhile, the personality we know as "Mr. Robot" has mostly been responsible for handling Elliot's crusade against E Corp, and then his crusade against the Dark Army. He easily recruits, manipulates, and threatens the various agents of these causes, including f society members like Romero; his frenemy Tyrell Wellick; and even his best friend Angela, who helped him plan Stage 2 of 5/9 behind Elliot's back.

So who is the third personality manipulating? Pretty much the only main character left is Whiterose herself. Is it possible that the purpose of "the other one" is to handle Elliot's interactions with the Dark Army leader without Elliot actually becoming aware of them? Remember that the entire series started after some event that made Elliot erase most of his own history, to the extent that he didn't remember founding f society, planning 5/9, or even that Darlene was his own sister. Could the third personality have been responsible for this memory wipe, deleting all knowledge of itself, its interactions with Whiterose, and its master plan from Elliot's mind?

If so, why? What is the third personality's goal? Is it just helping Whiterose long enough to foil her plans at the most opportune moment? Is it planning to steal whatever technology she's working on once it's complete, to use that technology to its own ends? Or, most alarming, is it a true believer in Whiterose's cause, determined to see her plan through to the end? If Elliot Prime is "Hero Elliot," is this third personality "Villain Elliot"? Is Elliot Alderson both protagonist and antagonist to this story?

If you consider Elliot's fractured psyche to be a trinity, then Mr. Robot is the Father (literally wearing Edward's face), Elliot himself is the Son… and "the other one" is the Holy Ghost, flitting about the edges of the series without ever being seen. When will the ghost in the machine reveal itself? With only five episodes to go before the end, it will have to make its presence — and its intentions — known soon, for good or for evil.