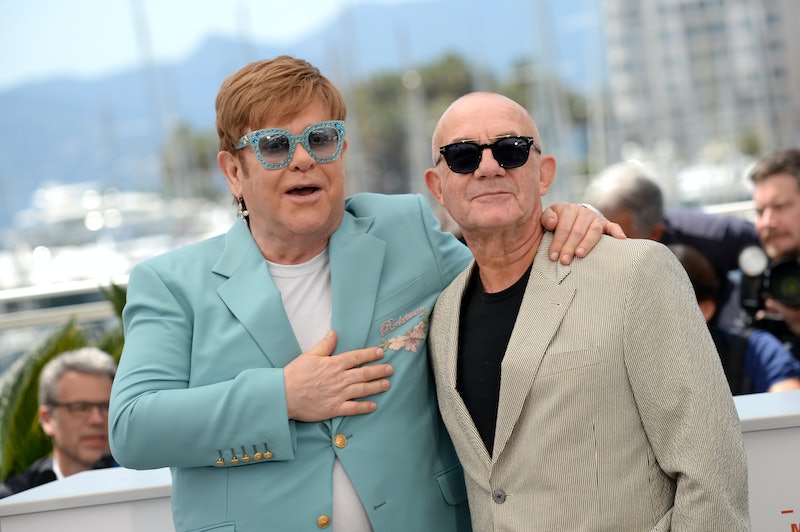 Rocketman recounts Elton John's story, from the time he was a young child to around his early 40s (although the movie plays around within that timeline). But while it's about John, it doesn't erase the most important man to his music besides himself: Elton John's writing partner Bernie Taupin. Taupin wrote the lyrics to most of John's songs, including the hits "Tiny Dancer," "Candle in the Wind," "Your Song," and "Rocket Man." So, yeah, it's pretty important that the movie gives him plenty of credit.

And aside from making it clear that Taupin was responsible for writing the lyrics for all of these songs, it also portrays him to be a great friend. Even at times that John (Taron Egerton) is being selfish or irritable, Taupin (Jamie Bell) is willing to immediately forgive him and support him.

The beginning of Taupin and John's real-life relationship was similar to what is shown in the film. As explained by the Los Angeles Times, they met in 1967 after they both responded to an ad in a music magazine. In turn, a music publisher ended up giving John lyrics submitted by Taupin to put to music.

Also, like in Rocketman, they really did live together for a while in John's mother's house and in an apartment with a woman John was once engaged to, according to The Daily Mail. But, as John explained in a 1997 interview with Conan O'Brien, "We still haven't collaborated at a song in the same room. It’s all been separate." Basically, Taupin hands John off the lyrics and he goes and puts them to music.

In a 2015 interview, Taupin told Rolling Stone that there is some collaboration, though. After explaining that he'll fax or email lyrics to John, he said, "I don’t want you to think it's a cold connection. We do get together and discuss things." Taupin added that he'll often go to the studio when John is recording. "He likes my presence, though I’m not sure why [laughs]. But yeah, I’m there waving the flag."

The lyricist also spoke about his personal relationship with John and how they've been able to work together for so long. (At the time of the interview, they'd been together for nearly 50 years.) "We live such separate lives," he said. "We are two separate people. I think had we been the same kind of personalities and been in close proximity of each other these past years, I think there probably would have been a more acrimonious kind of thing between the two of us. We do talk on the phone a lot, but not a tremendous amount, and it’s usually about record collecting."

John and Taupin are still on great terms today. While John is a producer on Rocketman and Taupin is not, they both attended the premiere at Cannes and did an interview together about how emotional watching the film made them.