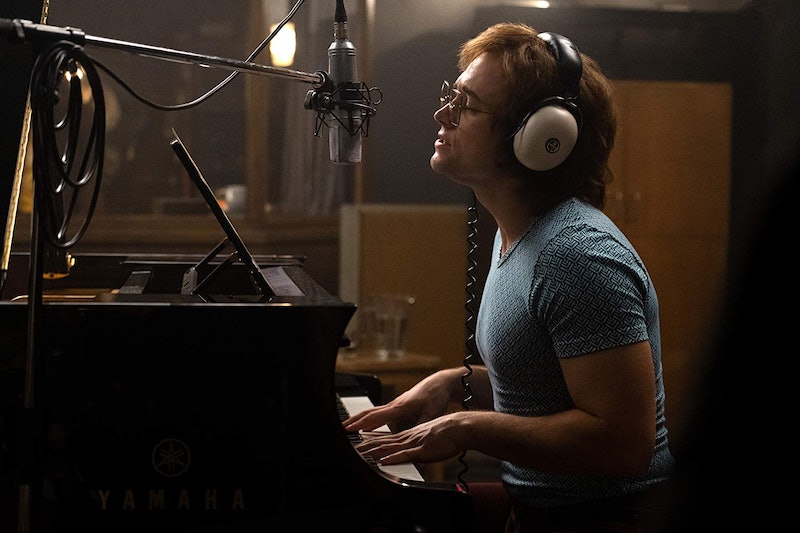 One of the most challenging aspects of creating a movie about the life of a legendary musical artist is bringing their singing voice to the screen. Rami Malek's performance in Bohemian Rhapsody, as it pertained to Queen frontman Freddie Mercury's singing, involved some fancy technology. The Elton John biopic Rocketman, which premieres on May 31, obviously includes its lead jamming along to many of the star's biggest hits. And yes, that's Taron Egerton really singing in Rocketman.

Mercury, of course, was not around to record new vocals for Bohemian Rhapsody, so the movie's version was a combination of old recordings, soundalikes, and yes, a little bit of Malek. John, on the other hand, was very involved in Rocketman, even serving as an executive producer. However, he didn't step in on a performance level. "I don't sing anything," John said in an interview with Egerton for Beats 1. "Taron has re-recorded all the songs that are in the movie."

Egerton and John already had a connection prior to Rocketman. The two first met when the living legend made a cameo in Matthew Vaughn's Kingsman: The Golden Circle, and Egerton definitely left a good impression. "Elton and I were like, 'Wow, this guy is really handsome and has a real striking presence,' " John's husband David Furnish told The Hollywood Reporter. "We took a real shine to him."

But it was when John heard Egerton show off his vocal talent in the 2016 animated movie Sing that he knew the 29-year-old actor had the chops to play him. Egerton voices a gorilla named Johnny, who, instead of following in his mobster father's footsteps, dreams of becoming a singer. In the final moments of the film, Johnny gets his moment in the spotlight, and sings Elton John's hit "I'm Still Standing" — which he also belts in Rocketman.

"It's not easy to sing Bernie [Taupin] and I's songs, and you've managed to do it with great aplomb," John told Egerton during their Beats 1 interview.

John also posted a statement on his official website about what was required of the actor who would play him in the film. “It was so important that the music I composed and recorded had to be sung by Taron," the statement reads. "I wanted his interpretation of me, through Bernie’s lyrics & my music — not just acting. I left Taron in the hands of Giles Martin, who I trusted implicitly because he's brilliant.” And in a behind-the-scenes preview for the film, music director Martin says that John had told him, "I don't think I've heard anyone sing my songs better than Taron." And, really, that's probably the highest compliment you can get from Sir Elton John.

The Rocketman soundtrack, which is streaming now, includes 20 of John's greatest hits, including "Tiny Dancer," "Don't Go Breakin' My Heart," "Bennie and the Jets," and of course "Rocket Man." And the man himself thinks Egerton did a great job covering his catalog, then it's highly unlikely that audiences will be disappointed.

More like this
The 'Love, Lizzo' Harry Styles Scene Is Just 1 Moment That Made Fans Feel Seen
By Brad Witter
Olivia Wilde & Harry Styles Are Reportedly "Taking A Break" After Almost 2 Years
By Jake Viswanath and Radhika Menon
This James Bond Event At Abbey Road Studios Was A 007 Fan's Dream
By Samantha Rollins
Britney Spears Celebrated Her Birthday With Loving Messages To Jamie Lynn & Her Sons
By Brad Witter
Get Even More From Bustle — Sign Up For The Newsletter