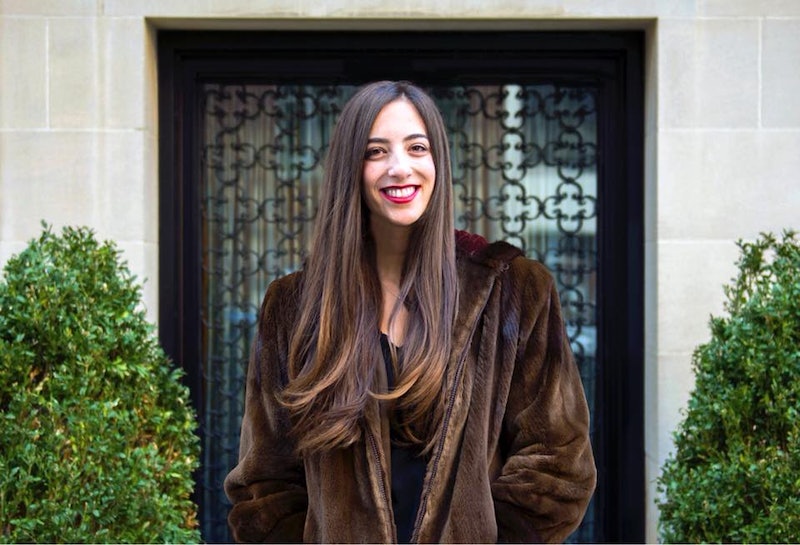 I’m Jewish — emphasis on the ish. I don’t believe in God, pray in synagogue, keep kosher, or observe Shabbat. Instead, I’m culturally Jewish: My family’s holiday celebrations are light on religion and heavy on homemade chicken soup. Like my mom and grandma before me, I play mah jongg. I sprinkle Yiddish into my speech, and for as long as I can remember, my family has replaced a post-sneeze “bless you” with an automatic “you’re so good-looking,” a reference to a Seinfeld joke.

The chicken soup is key. Maybe it’s a stereotype, but it’s true — nobody can make chicken soup like my grandma does. Every holiday dinner during my childhood began with a bowl of it. Her broth is hearty and bursting with flavor, and she ladles in either matzo balls or dumplings called kreplach.

Ever since I left home in the Boston suburbs and moved to New York for college seven years ago, I’ve spent fewer holidays with my family. Since meeting my boyfriend Saul last year, I’ve started celebrating holidays with his family in Brooklyn. While my family is Ashkenazi (Jews descended from Eastern and Central Europe), Saul’s is Sephardic (Jews from the Middle East with ancestors from Spain). There are a few cultural differences between us, one of which is food. When I joined them for Rosh Hashanah in September, I loved trying all sorts of dishes that were new to me, like stuffed grape leaves and black-eyed peas. But halfway through dinner, I realized what I was missing. There was no chicken soup. And suddenly, surrounded by a lively family and a delicious meal, I felt homesick.

Over the next two weeks, I ordered chicken soup from three different restaurants, but none tasted as good as Grandma’s. Each bowl of soup made me feel farther away from home than before.

I had always assumed that my future kids and grandkids would grow up on homemade chicken soup like I did. But as my grandma ages and as I begin to spend more holidays with my boyfriend's family instead of my own, I realize that if I want chicken soup in my life, I’m going to have to make it. Traditions don’t live on forever unless you carry them on.

On a Friday afternoon in November, I dial my grandparents to learn how to make the soup. My grandma keeps a box of yellowing index cards in her kitchen; they’re mostly handwritten recipes dating back decades shuffled in with notes from 1964 tracking how many ounces of milk my mom, then a newborn, drank every day. For years now, Grandma has told me the recipe box would be mine someday. But instead of retrieving the recipe card from her box, she immediately fires it off from memory.

“It’s very easy, a one-dish supper,” she begins. (Suppah — I love her accent dearly.) “Get a whole chicken. It can be in quarters. Make sure it’s clean. Put it in a pot with a whole onion. You add lots of celery, cut into pieces. Lots of carrot, cut into pieces. Then some parsnip, which gives a little sweetness to the soup. You can put in a piece or two, nothing much.”

She calls out to my grandpa, who I imagine is sitting in his regular spot in the living room while she sits in the kitchen. “Did I get everything, Jerry?”

I hear his muffled shouts about salt and pepper, but she doesn’t mention anything.

“Cover it with water, or more than cover it,” she continues. “When it starts to boil, you go back to the pot and scrub off any scum that comes up from the chicken. Then you lower the flame and let it cook away for an hour and a half.”

There’s more muffled shouting on her end of the phone. “He wants you to know that you have to taste it as you’re going along to see if you have enough salt and pepper,” she adds. “He won’t shut up.”

As for the matzo balls — mutzie balls, as she says — she recommends doing it the easy way, with Manischewitz Matzo Ball Mix.

I ask where she learned this recipe, and she balks, “Well, it’s not a real recipe. My mother made it that way. Everyone makes it that way.”

I make the soup a few days later, on what happens to be Election Day. I chop vegetables, unwrap the chicken, and put everything in a pot with water, salt, and pepper. I’m delighted to find that the recipe is truly impossible to mess up, which had been a concern for me because I rarely ever cook. True, I do own a pot in which I could theoretically make all sorts of soups and stews and pastas, but the only thing I’ve ever used it for is catching water that drips from my leaky air conditioner in the summer.

Saul comes over while the soup is cooking. He turns on the election results and we watch them together with breaks for me to make matzo balls and check on the boiling pot of soup. I post photos of my progress in the kitchen on Instagram stories. “Almost forgot to add parsley!” I cheerily caption one photo of the soup pot sprinkled with green leaves. I think everything is going swimmingly. Then I get a DM. “That’s kale,” one of my Instagram followers points out. Oops. I guess you shouldn’t expect a millennial to make a chicken soup with anything else.

When dinner is finally ready, I carefully ladle two bowls of soup and add in matzo balls. The broth is fragrant with the scent of home. It's golden with a filmy texture, just as I remember it. I get a little verklempt — that’s Yiddish for overcome with emotion. Just as much as (or even more so than) my Bat Mitzvah, successfully making a delicious chicken soup feels like the marker of becoming an adult Jewish woman. I savor every sip.

If I want to see my favorite traditions passed along in the future, I have to make them a priority. Especially in the wake of the the mass shooting at the Tree Of Life synagogue in Pittsburgh and the rise of anti-Semitic hate crimes, embracing my Jewish-American heritage feels more important than ever. For some people, that means praying in synagogue or observing Shabbat. But for me, all I really want is a savory bowl of homemade chicken soup.