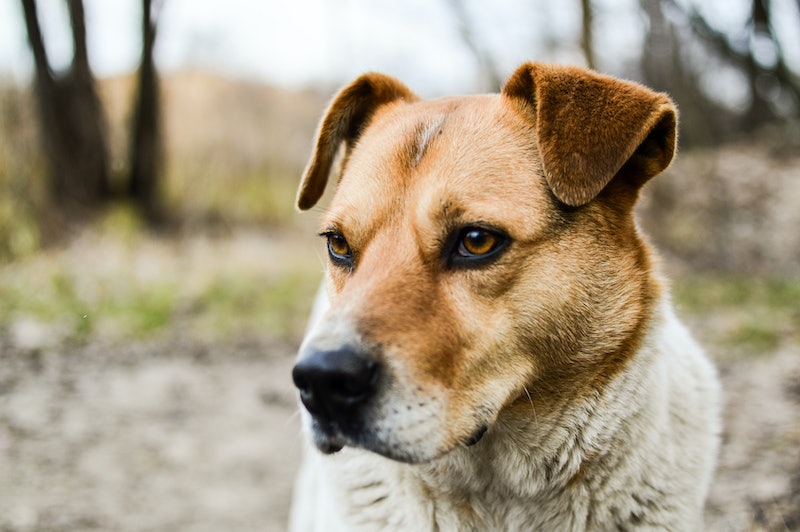 It turns out, dogs are getting stoned. Cats are too, of course — and I'm not just talking about catnip — but it seems to be that dogs with the munchies are really on the rise. While the idea may sound a little silly, the consequences can actually be very serious. There has been a huge increase in emergency calls for pets being poisoned by marijuana, so anyone who both has a pet and enjoys a little THC action should be aware. According to the ASCPA Poison Control Center, a 24-hour hotline, there were only 208 marijuana-related calls in 2008, but by 2016 that number had risen to 979, and, just a year later in 2017, reached 1,486. Last year, there were 1,800 calls — an increase of more than 760 percent in just the past ten years.

Dr. Tina Wismer, the ASPCA call center's medical director, told Mashable that while the fact that there's been less stigma around marijuana due to legalization and decriminalization may be leading to an increase in calls, it's also the sheer availability and amount of weed and edibles. If you're a pet owner, it's crucial to have an understanding of not just what your pet may be tempted to eat, but also how marijuana and edibles can affect them. While cats tend to go for marijuana itself, it seems that dogs are aiming for a tasty treat.

"Dogs, oh my gosh, especially [with] the chocolate-based edibles, the number of those calls has skyrocketed," Wismer told Mashable. Their acute sense of smell might have something to do with it, with a lot of stories appearing of dogs smelling edibles through bags or plastic and ripping through the packaging in order to get it. It turns out, Fido has some determination.

Not only that, according to the Los Angeles Times dogs are 10 times more sensitive to weed than humans, thanks to an abundance of cannabinoid receptors. Even if the level of THC is low, many edibles contain ingredients that a dog can't process or digest — like chocolate and some types of nuts. So it's not just the effects of marijuana, but whatever else they may have eaten with it that can be getting your pet into some trouble. Knowing what your pet can and can't eat is really important, especially if you're going to have treats around that pique their interest.

If your dog does ingest marijuana, they can develop marijuana toxicity. "Common symptoms of marijuana toxicity include sedation/lethargy, dilated pupils or glassed over eyes, dazed expression, difficulty walking and vomiting," according to the Pet Poison Helpline. What can you do if your pet has ingested marijuana? Take them to the vet to make sure they're stable, to start with — but then, it's mostly waiting. While there's an option of lipid injections to help sober them up faster, if your dog is in OK condition there's often little more to do then wait until they feel better.

Of course, some people purposefully give their dogs marijuana or other cannabinoid products, either to treat illnesses or to manage pain in pets who are terminally ill. Though there have been some positive results using THC products to help pets, it's really important to do your research. Ultimately, it's your decision but talking to your vet and ensuring that you use products specifically designed for pets can make sure that you're not harming them further with any additives or levels of THC that they can't tolerate. It may be the right call for you and your pet, but it's better to be safe than sorry.

Although the idea of a super stoned puppy might sound hilarious (and adorable), the consequences can be very serious. Being a responsible pet owner means making your home a safe space — so hide those brownies where Buddy can't reach them.

More like this
The 5 Best Cat Trackers
By Megan Gray
The 9 Best Duvet Covers For Dog Hair
By Claire Epting
The 8 Best Dog-Proof Litter Boxes
By Lauren Moison
The 5 Best SLS-Free Toothpastes, According To Dentists
By Amy Biggart and Danielle Calma
Get Even More From Bustle — Sign Up For The Newsletter