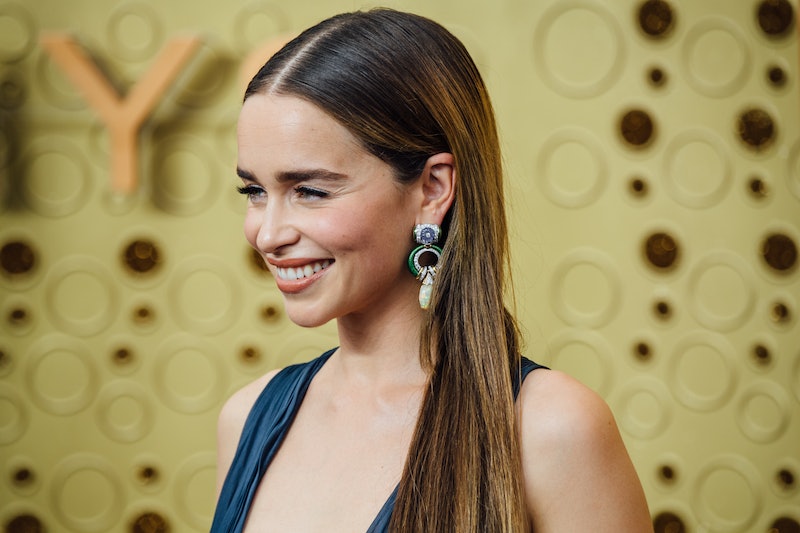 It was an eventful Emmys red carpet this year, but it wasn't just the gowns that had people buzzing. Emilia Clarke's ribcage tattoo was revealed on the red carpet on Sept. 22, although the meaning behind the ink remains a mystery. This brings Clarke's count up to three known tattoos, and two of them have confirmed sentimental meaning to the actor.

The Game of Thrones star arrived at the event wearing a plunging Valentino gown, which allowed Clarke's new ink to peek out. The tattoo is just under Clarke's left breast, and it depicts a freehand drawing of what appears to be a goat. Clarke has never mentioned the tattoo on social media, unlike the other tattoos she got. Clarke has both a bumblebee on her finger and a trio of dragons on her wrist, and she posted photos of the tattoos on social media while at the tattoo parlor.

While this is a new ink sighting for fans, Refinery29 points out that Clarke didn't get it just before the red carpet. The same animal tattoo can be seen behind Clarke's sheer red dress at the Time 100 Gala in April. The Dolce & Gabbana gown that she wore had a semi-sheer bustier top, allowing the same tattoo to peek out slightly.

While Clarke might not have gotten a tattoo right before the 2019 Emmys, her Game of Thrones co-star Lena Heady did. Heady visited celebrity tattoo artist Dr. Woo on Sept. 22 to get a scarab beetle inked onto her hand.

The beetle sits on the top of Heady's hand right next to her thumb, and the tattoo was done in the thin line work that Dr. Woo is known for. The mystical beetle is just one tattoo in a large collection. Heady has at least 13 different tattoos all over her body.

While Clarke might not have as vast of an ink collection as her former Game of Thrones co-star, the goat tattoo isn't her first. In September 2018, Clarke got a hand tattoo that commemorated her career-making role as Daenerys Targaryen, aka the Mother of Dragons on Game of Thrones.

Clarke also visited Dr. Woo for the tattoo and got a trio of flying dragons on her wrist. "MOD 4 LYFE! Dr. Woo made sure this mamma ain’t NEVER forgetting her babies....," Clarke captioned the Instagram photo that depicted her fresh ink. Clarke followed up the caption with a list of hilarious hashtags, like "Don't worry I only briefly passed out," "with fyre and ink baby," and "MOD got the hook upp."

"When we finished shooting Game Of Thrones I had three dragons tattooed on my wrist, so I'd never forget everything I owe to this show," Clarke told Elle Australia in an interview. "Also because they remind me of my brother, my mum and my dad. That's really important to me, as I lost my dad two years ago. It's been very hard, and it means I want my family with me all the time."

Clarke also has one other known tattoo: a bumblebee on her pinky, which she got the ink in 2015. The bumblebee was in honor of her 2016 movie Me Before You. In the romantic drama, Louisa Clark, the character who Clarke played, had the same tattoo.

"Just having a routine doctors appointment care of the master Dr. Woo," Clarke wrote on Instagram. "#mebeforeyou what was already stained on my heart is now stained on my skin."

It seems that most of Clarke's tattoos have emotional meanings, but there is no word yet what the goat tattoo means. Maybe Clarke wants to keep that secret close to her chest.