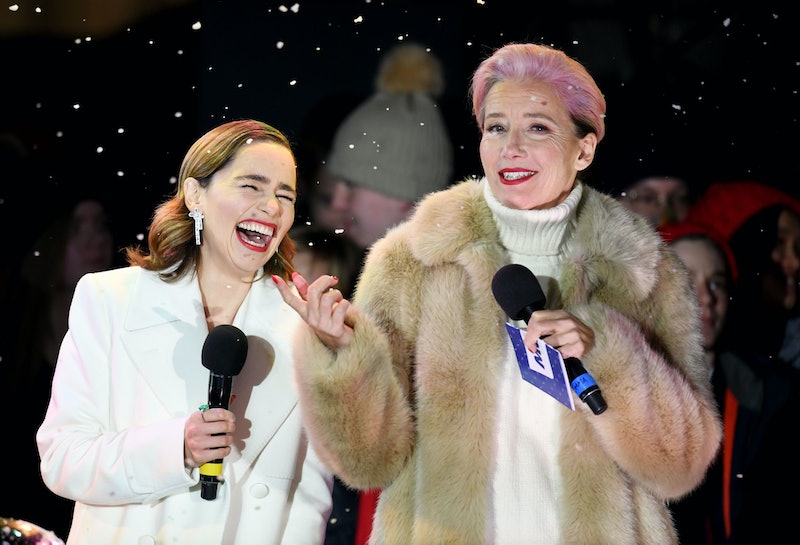 While the annual turning on of the Christmas lights may have been a bit of a dud in your hometown growing up, every year the ceremonies become more and more glitzy, especially in big cities. And this year, London's favourite shopping square was perhaps the glitziest of them all. Emilia Clarke & Emma Thompson switched the 2019 Covent Garden Christmas lights on, and appeared the have an absolute ball while doing it. The Last Christmas co stars cuddled in the warmth and had a good old sing song to celebrate the most magical time of year.

If there was a recipe for the ideal Christmas light switch-on event then Covent Garden got it so right this year. As fake snow fell, Clarke and Thompson flicked the switch on the twinkly lights before belting out a rendition of "Last Christmas" with the crowd. Enough to melt any Scrooge's heart.

This, combined with the two of them having a laugh on the red carpet, proves that Clarke and Thompson have become firm friends and I'm so here for it.

Thompson and her husband Greg Wise wrote the film she and Clarke appeared in, which is based on the George Michael song "Last Christmas," and the star revealed in an interview with Lorraine that she got Michael’s blessing to go ahead with the film before he died.

Speaking in an interview with The Upcoming about working with Thompson and Henry Golding in this film, Clarke said: “It was amazing. I think it was possibly the happiest filming experience I’ve ever had. It was really wonderful.” She continued:

“I think Emma Thompson’s and Greg Wise’s writing is sublime and I think they wrote an incredibly real character that you can empathise with and relate to. She’s a young girl trying to find her feet. That’s something we can all understand.”