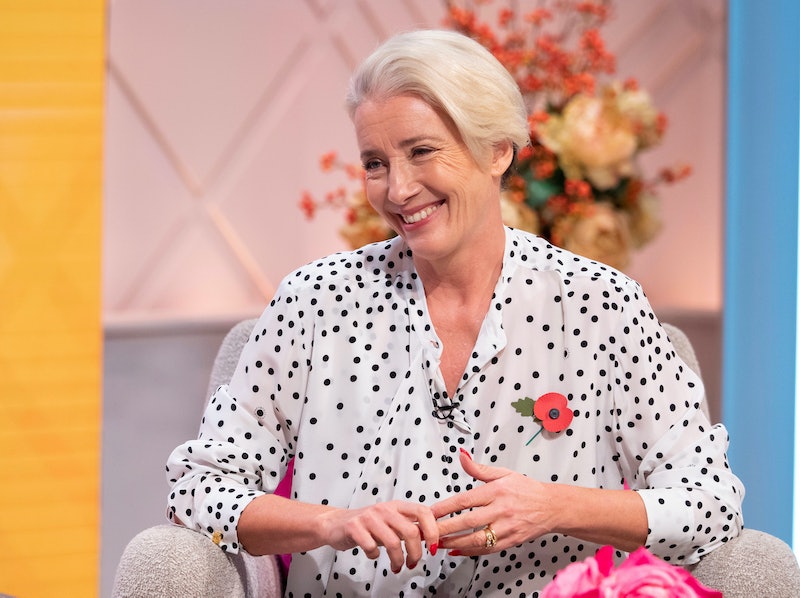 Last Christmas — the new festive rom-com penned by Emma Thompson and husband Greg Wise — may have received subpar reviews, but that hasn't stopped the cast gushing over the making of the film. Essentially, it's based on Wham!'s iconic "Last Christmas" and boasts a stellar cast, including Emilia Clarke, Henry Golding, and Thompson herself. Appearing on Lorraine, Thompson revealed that George Michael was "so pleased" with Last Christmas' concept. And, she said, "he wanted to be part of it."

Speaking on another show, The Tonight Show with Jimmy Fallon, Thompson said she was asked to write the screenplay by a producer. Her first thought was: "Not really, because it’s not my favourite Christmas song." But, together with her husband, they came up with "an interesting, sideways way of telling a different kind of story about the human heart."

I won't delve into spoilers, but the film centres on Kate (played by Clarke): a woman who loves the late George Michael, who has a chronic illness, and who works in a Christmas shop. Her boss (Michelle Yeoh) is super strict, her mother (Thompson) is interfering, and her world is turned upside down when she meets Tom (Golding). You'll have to watch it to find out all the twists and turns.

In a previous interview with the Mirror, Thompson said that Michael, who died in 2016, "loved elements of [the story] that were socially conscious." Director Paul Feig of Bridesmaids fame also told the paper the team decided to "go really far" and "make George's music the soundtrack ... For fans of George, they'll get to re-experience his music in this new way." In fact, the film features an unreleased Michael track, “This Is How (We Want You To Get High)".

Despite seeming to have it all, Last Christmas has disappointed many critics. Rolling Stone gave it one star, headlining the review: "When holiday movies go very, very wrong." The Guardian labelled it "a clunky, charmless disappointment" and the BBC's critic also had little praise for the film, writing: "What did George Michael do to deserve this?"

Feig, however, has embraced the Christmas spirit by warmly thanking everyone for their opinions. On Twitter, he replied to Rolling Stone's scathing review: "We can’t win everybody over but we will continue to try! I swear all of our hearts were in the right place. Can our one star at least be a really really big star?”