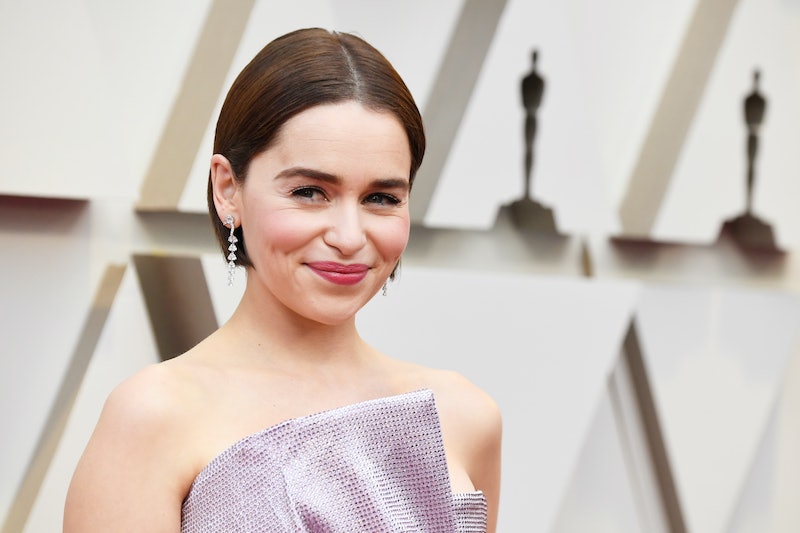 Is there anything quite as satisfying as whipping your bra off after a hard day's work? Maybe getting to chill with loved ones after a busy week? Or maybe, to take a well deserved break after completing a huge project? How about going on holiday after spending the best part of a decade starring in one of the most famous shows on the planet? Yeah that sounds pretty darn satisfying to me. And guys, according to one star's Instagram it's lit. Emilia Clarke has switched off from Game of Thrones and I feel like you can almost hear her sigh of relief.

The Game Of Thrones actor shared some pictures on her Instagram account of her on some pretty flipping well deserved holidays. She posted snaps of her and a friend taking in the sites, landscapes, and adventurous hikes of the Dolamite mountains. Under the photos she dropped a caption that said bye bye Daenerys and hello personal future and development.

"The long and winding road to kicking off khaleesi’s boots and trudging home in my own shoes once again. @imogen_f_lloyd you and these staggering mountains got my head to chill and my ass to light it’s own goddamn fire. Insta world it’s been a journey to get here but hell I'm happy to stop and admire that view..."

Sharing the pics of the rugged landscapes, animals they met along the way, yoga poses, and of course selfies Clarke appears to be living her absolute best life.

The photo comes after she posted pictures of herself partying at Glastonbury, indicating that this summer she is making the best of her new found freedom after being tied down to filming a show for all those years. Not just any show, Game Of Thrones, of which she was and is one of the biggest characters. The show which ended this year received the most Emmy nominations ever with a stonking 32 racked up, as People reports. Clarke is, of course, nominated for best actress which is well deserved after the final season saw her acting out some pretty hectic moments.

Speaking about her final scenes after they were aired, Clarke spoke to The New Yorker about how the filming affected her.

"I read these scripts coming on to two years ago now. When I did, I took a very long walk around London in a daze, not quite knowing how to digest the news. Now, finally, people are going, 'Oh, now we understand why this season hit you hard.' I had no idea what to expect for this last season. I hoped for some juicy things to get into, as I always do for each season, but I didn’t see this coming," she said

So what's next for Clarke? She is starring in Above Suspicion which is a film about the first ever FBI agent to be convicted of murder. As well as that she will be the lead in Last Christmas which is absolutely about to be your favourite yuletide delight. Until then, let the girl rest.