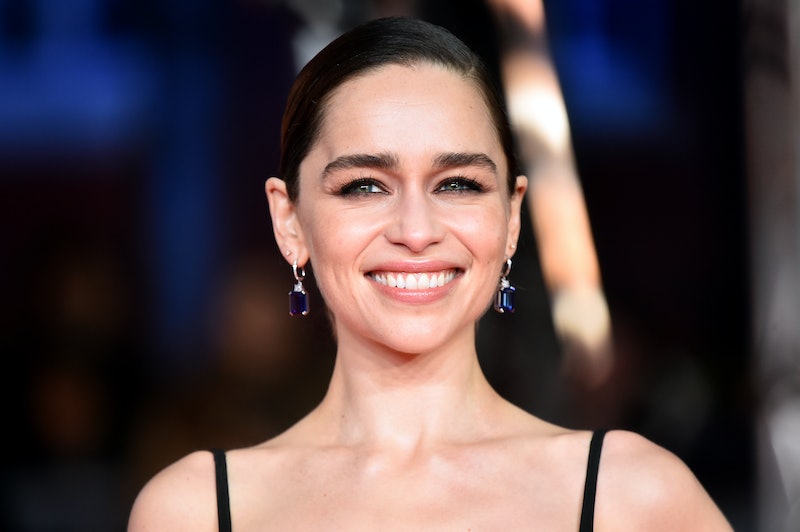 Although it's nearly a year since Game of Thrones wrapped up for good (where did the time go?), fans are presumably still partial to some behind-the-scenes gossip regarding the HBO smash. Luckily for us, one former star of the hit series came well-equipped with some intriguing anecdotes during a recent radio interview, and when speaking to host Zoe Ball, Emilia Clarke revealed that her brother stole her a gift from the Game of Thrones set.

As Digital Spy reports, Clarke, who portrayed the character of Daenerys Targaryen in the fantasy drama, discussed details of a gift she received from her sibling — who also once worked on the BAFTA award-winning series. Speaking on BBC Radio 2's The Zoey Ball Breakfast Show, the actor explained how she was previously unsuccessful in her attempts to sneak an on-set memento herself, mainly because she "abided by the rules."

"I was a frustratingly good girl — I didn't do anything," Clarke recalled, before adding that thanks to her "amazing" brother, who worked in the show's camera department, she finally got her hands on the ultimate Game of Thrones merchandise.

"In one of the battle scenes, he got a mate of a mate... he got one of the Targaryen flags. So I opened it this Christmas, just burst into tears! So that's going up in pride of place, because I keep asking Game of Thrones, 'Please can I have a wig? A coat?!'"

This isn't the first time Clarke has opened up about her on-set wish list, and as Access Hollywood reports, the actor previously had eyes for the Mother of Dragons' legendary blonde wig. Speaking on the Emmy Awards red carpet last year, the Last Christmas star revealed how she planned to take home her character's much-loved locks, however, after seeking permission from show-bosses, Clarke is still waiting on the wig to arrive.

"I was like, 'Pretty please, can I have a wig?' Because that's my thing, it's my hair," the actor explained. "I have not seen the wig! We wrapped, like, a year and a half ago! I'm waiting for my wig."