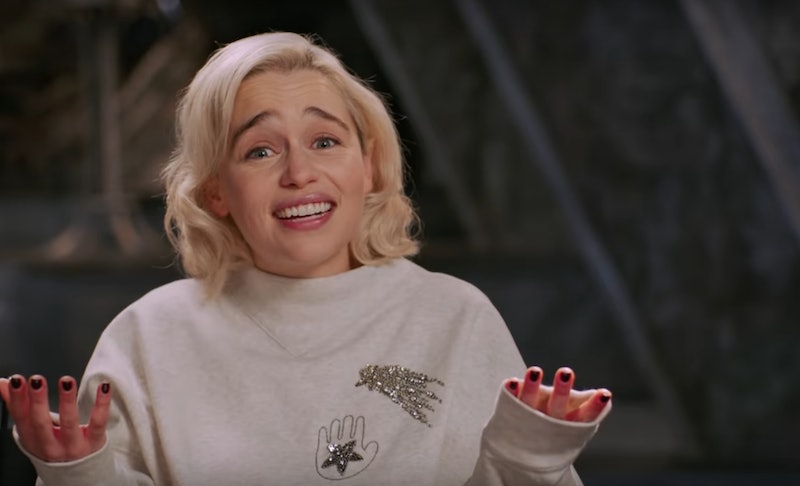 When you haven't had much experience acting in front of a camera, appearing on pretty much any set is bound to be intimidating. In fact, Emilia Clarke's first day filming Game of Thrones was *so* intimidating that it made her cry, according to an interview with the actor as part of HBO's new video series, "The Cast Remembers." Don't worry, though — Clarke finds the whole thing funny now, and she's definitely able to laugh about it.

In her video interview, when asked whether or not she remembered her first day on the Game of Thrones set, Clarke — who plays Daenerys Targaryen, aka Khaleesi, Mother of Dragons — didn't hesitate for a second. "Yeah, I remember my first day on set," she said, busting out into laughter. "Oh my god, I fell off a f*cking horse."

She then went on to explain, "This is my first job — this is like the first thing I ever did, and they stuck me on a horse," she sighed. "In a bamboo field in Belfast, and it's raining."

Aww. Hey, at least it wasn't anything too traumatic. It could have been a lot worse, considering some of the things that went down in the first season.

In addition to sharing the story of her somewhat embarrassing first day, Clarke also discussed the impact the show has had on her life. Her role on the series has had a positive professional impact, of course, but base don her interview, it's clear that the character has also had a very significant impact on her personally.

"The journey that I’ve been on with Daenerys, it's sharpened me as an actor, and because of the heights that she goes to, it’s forced me to find them within myself," she revealed. "And so, anytime anything good or bad happens, you put it into her. So, Daenerys is a tapestry of my entire adult life. Within each major scene of Daenerys, is every major scene of my life."

Clarke has no doubt harnessed Daenerys' strength in her own life over the course of the last several years, as evidenced by her recent essay for the New Yorker. In the piece published on March 21, Clarke revealed that she'd quietly suffered from two brain aneurisms while filming Game of Thrones.

Her resilience throughout the life-threatening health-scare is beyond admirable, and the essay led many fans to start referring to Clarke as the true Khaleesi. It's a title she's certainly earned — even if it took her a little while to get the hang of riding a horse.