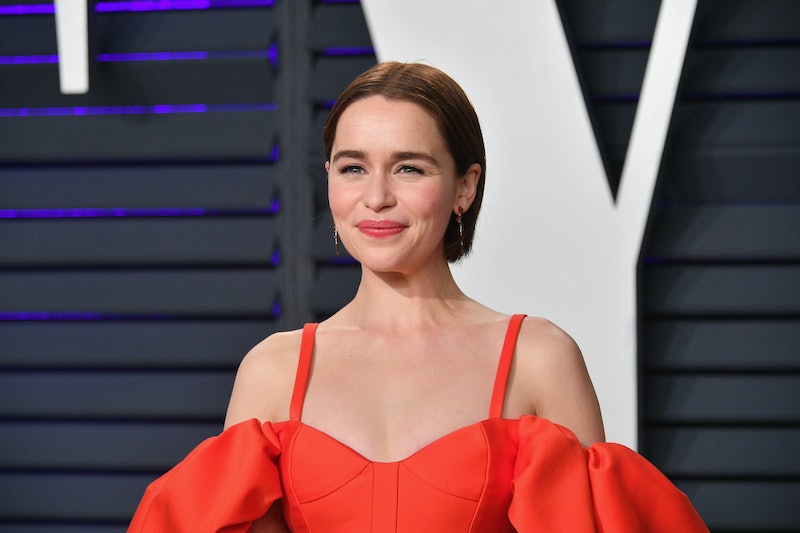 Leaving Westeros behind won't be easy for anybody. On Sunday, Emilia Clarke shared a goodbye post for Game of Thrones on Instagram, highlighting how formative the show was for her as an actor and person. Clarke included a slideshow of Game of Thrones memories, including a photo of the whole cast in costume on set and a picture of the actors hanging out on a couch off-hours. The star also included a snap of her Daenerys' wig, as well as one last selfie taken in costume. It's clear that parting ways with the series will be difficult for the cast as well, and Clarke's photos are sure to make GoT fans emotional.

In addition to the nostalgic slideshow, Clarke also shared some words about how meaningful her years working on Game of Thrones were. She wrote:

"Finding the words to write this post has left me overwhelmed with how much I want to say but how small words feel in comparison to what this show and Dany have meant to me. The mother of dragons chapter has taken up the whole of my adult life. This woman has taken up the whole of my heart. I’ve sweated in the blaze of dragon fire, shed many tears at those who left our family early, and wrung my brain dry trying to do Khaleesi and the masterful words, actions (and names) I was given, justice."

Clarke, as with many of the show's other stars, dedicated almost nine years of her life to filming the eight seasons of Game of Thrones. She filmed the first season of the show in 2011, as per New Yorker.

Game of Thrones became a massive cultural phenomenon - the first episode of Season 8 had 17.4 million viewers across HBO platforms, according to Mashable. The show, based on the book series by George R. R. Martin, has amassed a dedicated following. Given how meaningful the show is to fans, it's not surprising the cast's been shaped by the years working on the series as well. In Clarke's Instagram post, she went on to describe how much playing Daenerys taught her. She continued,

"Game of Thrones has shaped me as a woman, as an actor and as a human being. I just wish my darling dad was here now to see how far we’ve flown. But to you, dear kind magical fans, I owe you so much thanks, for your steady gaze at what we’ve made and what I’ve done with a character that was already in the hearts of many before I slipped on the platinum wig of dreams. Without you there is no us. And now our watch has ended. @gameofthrones @hbo #love #motherofdragonsoverandout"

The Game of Thrones actor's post also included a thank you message for fans. Clarke noted how the faithful viewership made the show as massive as it was and allowed the series to continue for so long.

As the final episode of Game of Thrones nears, fans can likely expect even more nostalgic goodbye posts from the cast. People who love Game of Thrones have been on a long journey to the end of the series, and for the actors who worked on the show over the years, saying farewell will be even more difficult.