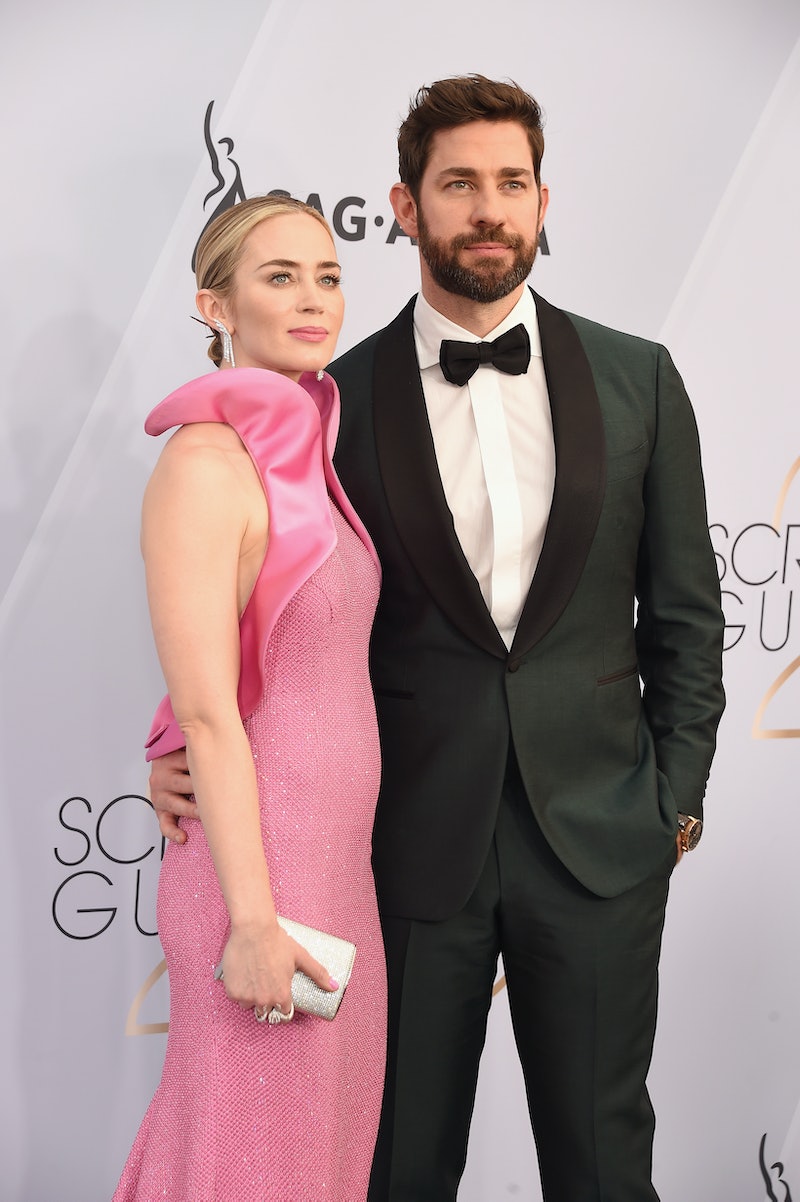 Emily Blunt and John Krasinksi's collaborative work on A Quiet Place has resulted in major box office success and plenty of awards — but the actress was actually warned against starring opposite her husband before she signed on. Apparently, people were concerned that Emily Blunt and John Krasinski would divorce after A Quiet Place because of the many stresses of working so closely with your significant other. And they didn't mind sharing their concerns with Blunt herself.

According to Elle, after the actress won a Screen Actors Guild Award for her performance in A Quiet Place, Blunt told reporters backstage that many people didn't think that her decision to work with her husband would end as successfully as it has. 'A lot of people were like, 'You’re going to be divorced by the end of it,'" Blunt said, "But actually we were so much closer. And I think the discovery of how well we collaborated, how well we can create something together, was just so special."

Blunt made sure to celebrate Krasinski during her acceptance speech as well, dedicating her Outstanding Female Actor in a Supporting Role trophy to her husband, who wrote and directed the film. "I am going to share this completely with my husband, John Krasinski, because the entire experience of doing this with you has completely pierced my heart," she said, while her proud husband held back tears. "You are a stunning filmmaker. I am so lucky to be with you and to have done this film with you."

She also joked about how grateful she was that Krasinski cast her as the Abbott family matriarch, Evelyn, saying, "Thank you for giving me the part. You would have been in major trouble if you hadn’t."

Despite Blunt's jokes, Krasinski admitted back in October that he was actually scared to ask his wife to star in the horror flick, telling Jimmy Kimmel that it was the most nerve-wracking part of taking on the project. "First [I was nervous], that she would say 'no,' because that's just gonna be an awkward dinner," Krasinski explained during an appearance on Jimmy Kimmel Live. "But I was actually more afraid that she'd say, 'Yes, I'll do it for you.'"

"I've been next to her when she's made all these amazing decisions and she's without a doubt the classiest, smartest, most dedicated actress I've ever known," he continued, "And when you see how much she puts into every role, I didn't want her to come to set just for me."

Luckily for him, Blunt read the script while the pair were on a flight, and she woke up a sleeping Krasinski in order to demand that he cast her as his leading lady. "She genuinely looked sick," Krasinski said of Blunt's reaction to reading the story for the first time. "And I was reaching for a barf bag thinking she was gonna throw up, and instead she said, 'You can't let anyone do this movie.'"

Though their adorable support of each other throughout awards season has helped cement Blunt and Krasinski as one of the sweetest couples in Hollywood, she told The Hollywood Reporter in December that the decision to work together meant a lot to their relationship. "I didn't want it to be like, 'Oh, how adorable. They're working together,'" Blunt told the outlet.

She continued: "It was the only idea that had come our way that seemed bigger than our marriage. The narrative of our marriage was not going to overwhelm this movie and this amazing opportunity for him as a director, as a filmmaker, as a writer. I knew this was a big swing for him."

Despite their worries about taking on A Quiet Place together, Blunt and Krasinski's time working on the movie has only served to bring the two of them closer together — and earned them millions of dollars and plenty of awards in the process.