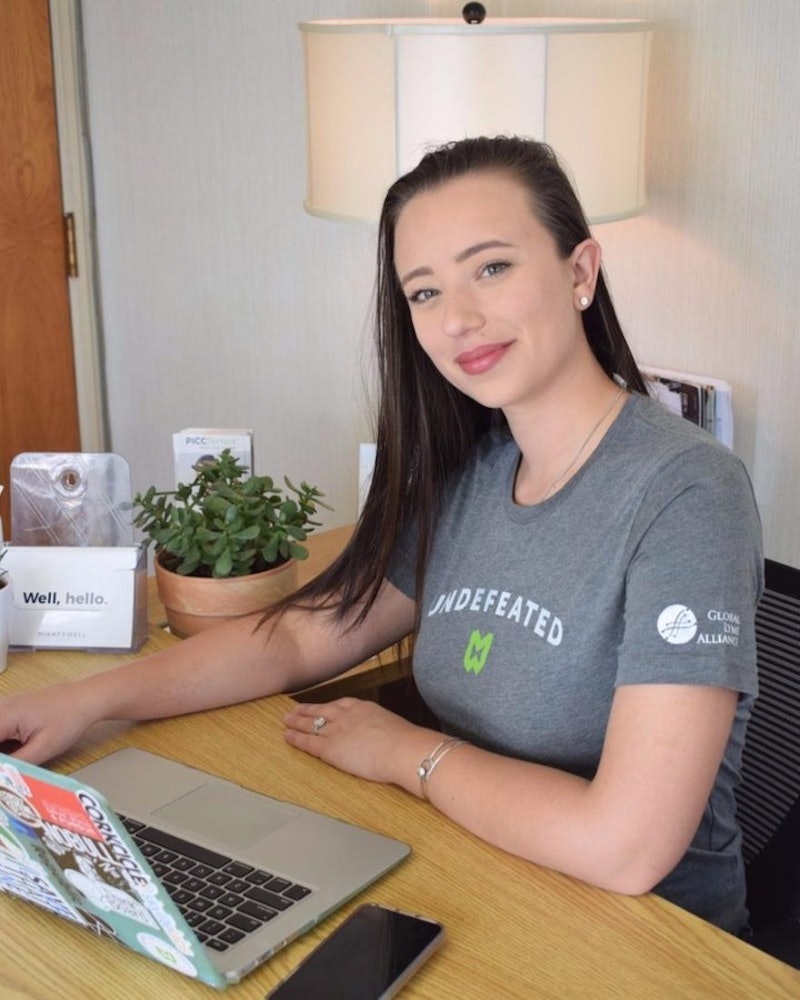 I'm 25 now, but I first got sick in the seventh grade. At the time, the doctors said it was the worst case of mono that they'd ever seen. Taking a shower, the water pressure on me was painful. I was probably sleeping 18 to 20 hours a day. I couldn't keep food down. From being really active, playing field hockey and riding my bike around town, I became a complete shell of myself.

In eighth grade, I moved to Rhode Island to go to a a smaller school that could help me with my health challenges. By the time I was in high school, I was able to play sports again, but I always had chronic joint pain and chronic fatigue. I blamed it on not stretching properly, being tired after a long day of school, or growing pains. But I had a ton of brain fog and a lot of cognitive difficulties in school. I went from getting A’s to barely passing.

Then, my younger brother got a classic, bulls-eye rash when I was around 18, and my mom started learning about Lyme. It turns out that in the town we were living in, one out of three people had reported being infected with Lyme. But because my symptoms had become so neurological, so pain-driven, no one ever pointed to it. Once my mom started to learn about it from my brother, she found me a Lyme-literate nurse practitioner, and I finally got a diagnosis.

I started taking antibiotics to treat the Lyme, but because I couldn’t keep them down, I had to get a PICC line when I was 20. It’s basically a long-term IV. People often get them for chemotherapy, or IV nutrition. For me it was really freeing because I could properly start treatments and do all the infusions myself. I felt like I had a lot more independence with the PICC — it was kind of like the one thing I could take control over in my circumstance.

I've struggled with anxiety and depression since I first got sick, and I didn't know anyone in my day to day life, especially when I went to college, who was going through this. I'd gone through my freshman year thinking I was a clumsy, forgetful weirdo. But then once I had a diagnosis to confirm everything I was feeling, I felt a sense of purpose and wanting to connect with others who were going through the same thing. I looked up the hashtags #piccline and #lymedisease. And my world was really opened because here were hundreds of thousands of people explaining their journeys, which were so similar to what I was going through.

When I started living with the the long-term IV, I was told to wear a cut sock on my arm to protect the device because I had this tubing that would go all the way from my wrist to my heart. I would freak out that it could get pulled or infected, which means I'd have to go back to the hospital. I went to Babson College, which is known as an entrepreneurial college, and we had a class project to develop a business idea over a semester. That’s really how my company, Mighty Well, began. I started by designing PICC line covers because I had Lyme disease and needed one, and now we have a backpack that fits over a wheelchair. We have a medical organizer that looks more like a Beats headphone case than your Monday-Friday pill box. We have a wrap jacket that’s especially designed for people in seated positions, or who have mastectomy drains. We also have a partnership right now with the Global Lyme Alliance where we're donating 50% of profits of our green PICC line cover, and we did an exclusive shirt for them.

Being an entrepreneur isn't easy for anyone, but layer in having a chronic condition, managing doctors appointments, or days you don't feel well, and it’s a whole other layer of complexity on top. I also feel like it has made me have to be very focused with my time. On weeks where I have my home care nurse come, I can only work four days a week. They may be longer days, but I have to get everything done. But also, when you have experienced the problem yourself firsthand, you can really relate with your customers.

It’s ridiculous that people are still skeptical about Lyme disease. Spend a week with me and you'll see what I still live with and still go through. Just because you see me on the street and may not know that I live with a port in my chest, doesn’t mean I don't live with chronic health setbacks and a disability. While the testing still has a long way to go, there are accurate tests out there. There are ways to prove that this in fact does exist. I really try to use my voice and my story to show people that we have the tests to confirm it. I'm really hoping that we can use Mighty Well as a force for good.

As told to Melanie Mignucci