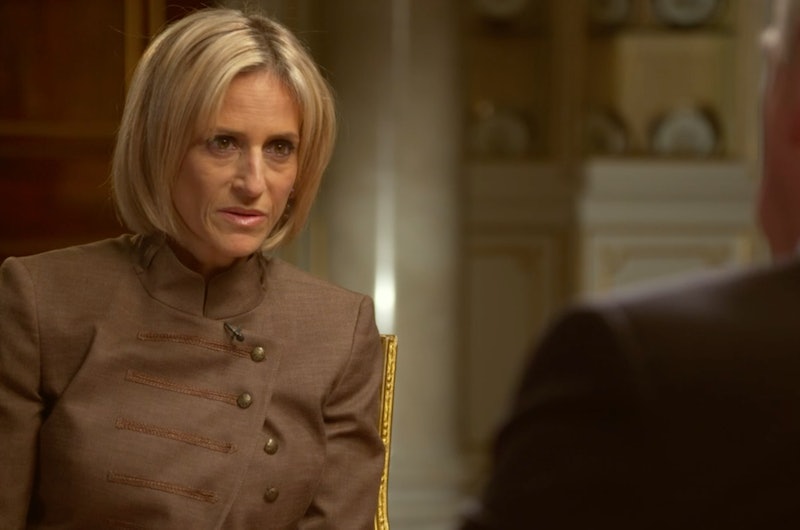 Prince Andrew's bombshell Newsnight appearance in November 2019 made headlines around the world. During the interview, the Duke of York was quizzed about several allegations made against him (which he denies), and his friendship with billionaire Jeffrey Epstein. His comments sparked a huge public reaction. Now, the host of the Newsnight special has revealed she was channelling a very specific character. Yes, Emily Maitlis was inspired by Line of Duty's Kate Fleming during her interview with Prince Andrew.

Maitlis made the revelations during an appearance on Jessie Ware's Table Manners podcast. "I think I was slightly channelling DCI Kate Fleming," she explained, before continuing, "there's something so calmly forensic about the way [interviews suspects]. It's really unemotional, really calm, really quiet, but you just know she's done all her homework."

"That was the thing I wanted. I would have shown myself up if I'd got the dates wrong, I got the names wrong, if I'd said something that he'd had to massively contradict because I'd mixed things up," the Newsnight host added.

Maitlis also disclosed how she resisted the urge to "dance internally" during filming, and instead focused on remembering the line of questions she had prepared beforehand.

The presenter later touched upon the "extraordinary" comments made by the Duke of York throughout his interview on the BBC current affairs programme.

"I just thought what an extraordinary thing to say. Literally everything that came out of his mouth was sort of extraordinary as a journalist trying to piece the story together," she revealed, before concluding, "It was a question of making sure we understood the full narrative of what he was trying to tell us."

The character channeled by Maitlis is Line of Duty's DCI Kate Fleming, who is portrayed by actor Vicky McClure. Flemming works as an undercover specialist in the fictional AC-12 anti-corruption unit, and is described by the BBC website as a "consummate professional, unmoved by emotional considerations."