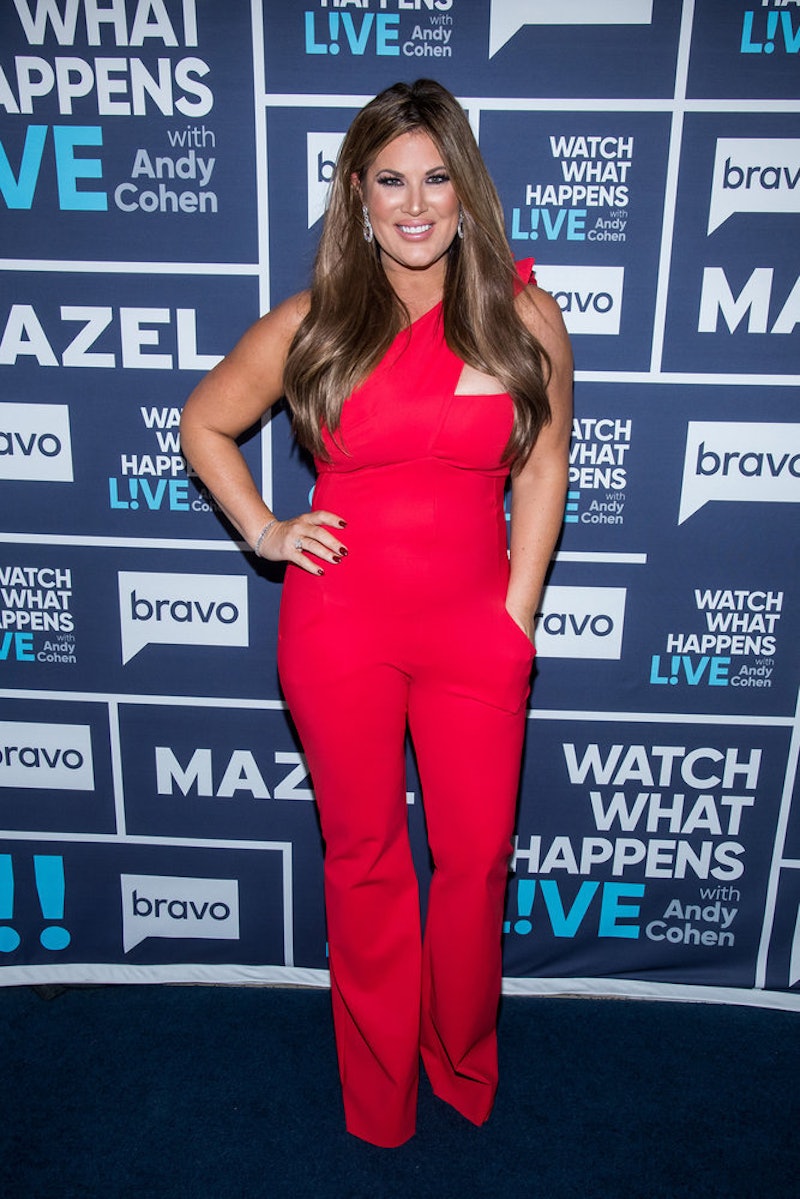 Right out the gate, Real Housewives of Orange County Season 14 has been rough for Emily Simpson. A major storyline has been that she's with her kids alone while her husband, Shane Simpson, studies for the bar exam. And he didn't even attend a birthday dinner for his parents that Emily hosted, much to her chagrin. Luckily, 2019 updates about Emily Simpson's life shows that things might be getting easier for her. Well, hopefully.

During the second episode of Season 14, Shannon Beador revealed that she and Tamra Judge blocked Emily on Instagram. Out of all of the things their other co-stars have done to them, why did Emily, of all people, get blocked? It doesn't quite make sense based in comparison to their past histories with Vicki Gunvalson and Kelly Dodd. But I digress.

At least Emily has Gina Kirschenheiter to confide in. During the Aug. 20 episode, Emily revealed that she took a dance lesson to perform a "sexy" dance for Shane, but he shut down that idea, making her feel dejected. It's hard to watch Emily this season and not want to give her a hug. She has been going through a lot and it seems like she still is, but there are definitely some bright spots mixed in.

She Is Struggling With Arthritis

In an Aug. 22 Instagram post, Emily told her followers, "So a lot of you know that I’ve struggled with weight gain over the past year due to chronic pain from arthritis. The severity of the pain left me depressed and completely unmotivated to do any type of exercise or movement." Now, it seems she has found a way to work out and manage her pain, which is a great sign.

During the Aug. 20 episode, Emily revealed that she had stress-induced alopecia and that she was losing her hair. Dr. Sarah Gee explained to Bravo's Lookbook that "the medical term for stress alopecia is 'Telogen Effluvium' (TE), and this type of hair loss is characterized by excessive shedding of hair."

Typically this occurs "around three to five months after a stress, such as surgery, taking certain medications, weight loss/weight gain, or an upsetting life event," which makes sense considering how much Emily's life shifted filming Season 14. Even her cast biography stated that Emily was "functioning like a single mother."

Even though Lizzie Rovsek and Emily were never OC Housewives at the same time, the two of them are friends. Not only that, but Emily recently collaborated with Lizzie to design a swimsuit for Lizzie'z line Sun Kitten Swimwear.

In July, Emily cleared the air when she found out that Google searches for her age were incorrect and said she was 11 years older than she actually is. Perhaps someone at Google saw Emily's tweet, since her age is now listed correctly.

She Celebrated Her Body

After the Season 14 promotional photo were released, Emily addressed "derogatory comments" about her body. Emily told her followers, "I’m not sure if you all know this but I’m a woman, I have curves and they are frikin’ hot and amazing ...but I’m also a human and I have feelings too."

She told the haters, "I hope you find some happiness and peace someday so that attacking someone’s looks and being so vicious doesn’t come so naturally to you." Preach, Emily.

Even though Emily and Shane's marriage appears to be her major storyline this season, she did post a photo in honor of his birthday in June, hopefully indicating that their relationship has improved. Nevertheless, they do have some doubters. On Aug. 20, Tamra Judge told Us Weekly that Shane is "just not around."

She Is Getting Along With Kelly

During Season 13, Kelly called Emily's husband a "dork" and Emily said she wanted to "kill" Kelly in return. A year later, the two of them vacationed together in Mexico and it wasn't even for the show. Things have definitely changed since filming.

Emily's 2019 has been full of ups and downs, but hopefully things turn fully turn around for the mother of three.

More like this
Erika Jayne's Estranged Husband Tom Girardi Has Been Indicted On Fraud Charges
By Jake Viswanath
'RHOSLC’s Heather & Whitney Are Still On A “Friendship Break” After Season 3 Reunion
By Jake Viswanath
Everything To Know About A Potential 'RHODubai' Season 2
By Kadin Burnett and Brad Witter
Everything To Know About 'RHOSLC' Season 4
By Jake Viswanath
Get Even More From Bustle — Sign Up For The Newsletter
From hair trends to relationship advice, our daily newsletter has everything you need to sound like a person who’s on TikTok, even if you aren’t.