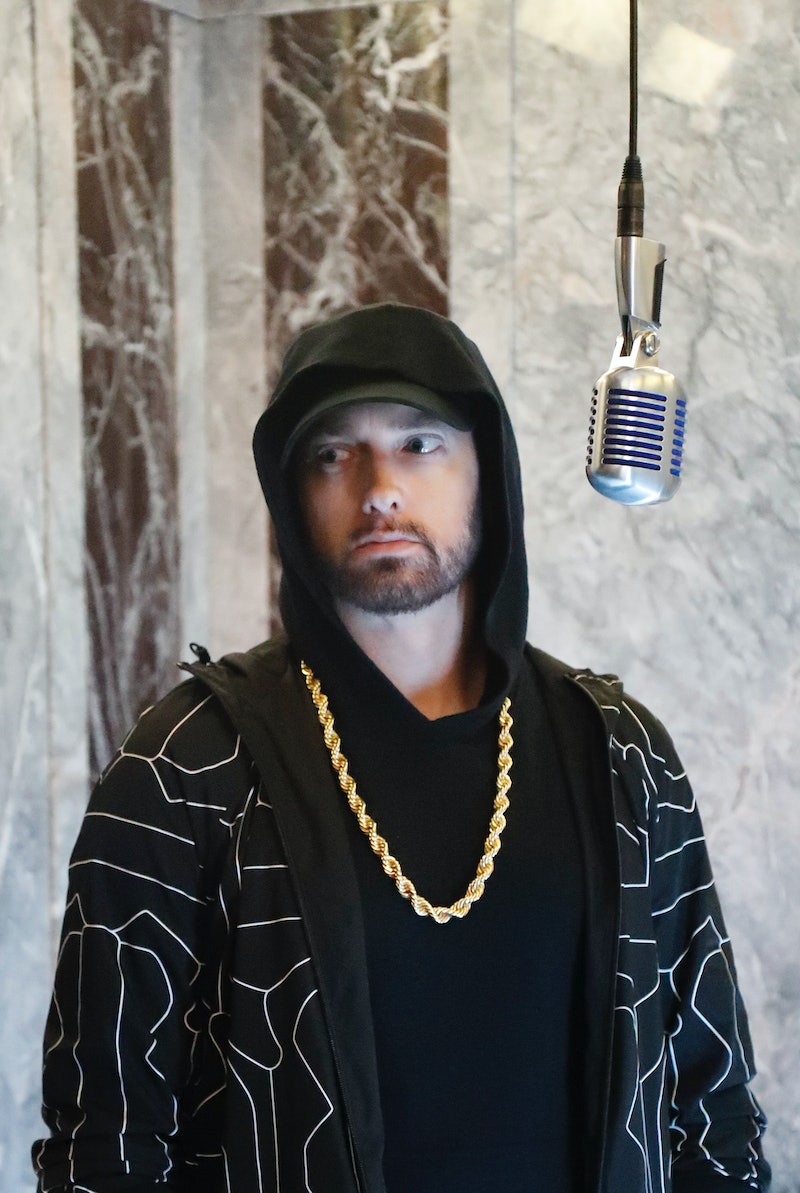 Eminem's twelfth studio album hasn't even been out for a full 24 hours, but the rapper is already under fire for some of his newest lyrics. After releasing a surprise record on Friday, Jan. 17, Eminem has earned backlash for referencing the 2017 Manchester Arena bombing outside of an Ariana Grande concert on the song "Unaccommodating." In the second verse of the song, which appears on his new album, Music to Be Murdered By, Eminem raps the lyric, "I'm contemplating yelling "Bombs away" on the game / Like I'm outside of an Ariana Grande concert waiting," while an explosion sound can be heard in the background. Bustle reached out to a representative for Grande but did not receive an immediate response.

This actually isn't the first time that the controversial rapper has referenced the May 2017 tragedy, when a suicide bomber detonated an explosion outside of Grande's concert, killing 22 people and injuring 56 others. In December of 2018, Eminem's a cappella freestyle "Kick Off" also featured lines about the Manchester attack. "Like a ... Suicide bomber that’s seeing / Ariana Grande sing her last song of the evening/ And as the audience from the damn concert is leaving/ Detonates the device strapped to his abdominal region/ I’m not gonna finish that, for obvious reasons," he raps in the chorus of the track.

The rapper is no stranger to controversy — and he seems to be courting it with "Unaccommodating," a song that name drops everyone from Saddam Hussein and Osama bin Laden to JonBenet Ramsey and serial killer John Wayne Gacy. But many social media users felt that he finally went too far with his lyrics about Grande and the Manchester Arena bombing.

In response to the backlash, many of the rapper's fans pointed out that Eminem has built his entire career on songs with controversial lyrics, with lines about committing violence against women and plenty of homophobic lyrics. In addition, they argued that his songs are actually calling attention to society's ills through their graphic nature, and promoted a report that Eminem helped raise almost $2 million for victims and survivors of the bombing, according to a 2017 article from The Telegraph.

The Manchester Arena Bombing isn't the only music-related tragedy that inspired a song on Music to Get Murdered By. Eminem's new song, "Darkness," references the October 2017 Las Vegas shooting at the Route 91 Harvest Music Festival in which 59 people were killed and hundreds more were injured. Along with the album, on Friday, Eminem also released the "Darkness" music video, which featured a recreation of the tragedy, along with footage of news outlets reporting on various mass shootings. "When will this end? When enough people care," reads a screen of text at the end of the video, where he encouraged his fans to "register to vote at vote.gov. Make your voice heard and help change gun laws in America."

More like this
How Ghosts Inspired Kesha's New Music
By Jake Viswanath
Beyoncé’s Special Tribute To Sister Solange Was Both Touching & Hilarious
By Stephanie Topacio Long
Is Dua Lipa Dating Trevor Noah? New Photos Show Them Kissing & Hugging
By Brian Anthony Hernandez and Martha Sorren
Everything To Know About Taylor Swift’s 10th Studio Album, 'Midnights'
By Grace Wehniainen and Jake Viswanath
Get Even More From Bustle — Sign Up For The Newsletter