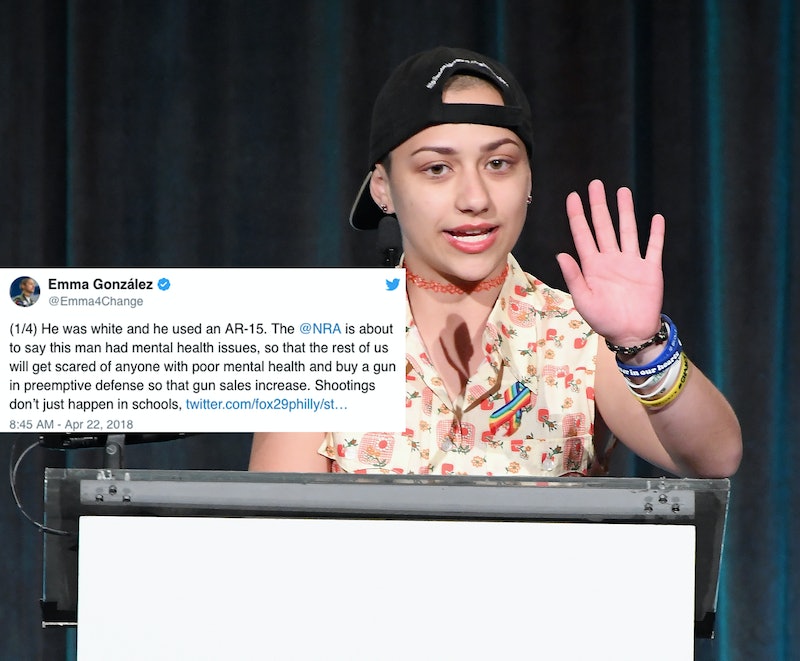 Four people were killed at a Nashville-area Waffle House early Sunday after a gunman shot two people in the parking lot with an assault rifle, and then entered the restaurant to continue firing. Soon after the news came out about the deaths, Parkland shooting survivor Emma González tweeted about the Waffle House shooting and argued that the because the gunman was white, the narrative would immediately move to his mental health being the problem, not gun proliferation.

González also argued that the response from the NRA could be a guise to sell more guns and grow fear of mental illness. She wrote:

The @NRA is about to say this man had mental health issues, so that the rest of us will get scared of anyone with poor mental health and buy a gun in preemptive defense so that gun sales increase. Shootings don’t just happen in schools, they happen everywhere in America, and now one has happened in Waffle House.

Bustle has reached out to the NRA for comment. The shooting, which took place in Antioch, Tennessee, was stopped by an innocent bystander who hid near the bathrooms after the shooting began, police said.

Metro Nashville police spokesman Don Aaron said the man "saw the gunman looking at his rifle. At that point, the shots had stopped. So he decided to rush the gunman, actually wrestled that assault rifle away, tossed it over the counter." The gunman then fled. The police credit the intervention with saving a number of lives.

González pointed out that this discredits the argument that only a "good guy with a gun" can stop an active shooter, or "bad guy with a gun." Along with the shrugging emoji, González tweeted, "The local police say a man at the scene wrestled his gun away — looks like you don’t need to arm a teacher (or a resource officer) to stop a shooting."

González said that shooting prevention measures, apart from limiting the sale and ownership of guns, are bound to fail. "You can donate all the shooting shelters to schools that you want, but at the end of the day, we can’t build our world out of Kevlar — someone is making Mad Money off that," González tweeted.

She ended her tweets with a clear policy answer of what she sees could prevent shootings going forward. She wrote:

Removing the assault and semi-automatic weapons from our Civilian society, instituting thorough background checks and mandatory waiting periods (and raising the buying age and banning the production of high-capacity magazines) are the ways to stop shootings in America.

González was not the only one to respond to the shooting on Twitter. Both Waffle House and the Nashville mayor tweeted in response, focusing on thoughts and prayers for the victims and their families.

Nashville Mayor Mayor David Briley, also tweeted that his "heart goes out to the families & friends of every person who was killed or wounded in this morning’s shooting." But that was in addition to an implicit acknowledgement that gun homicides are an ongoing issue in the city. "It’s a tragic day for our city anytime people lose their lives at the hands of a gunman," Briley tweeted.

Last year 107 people were killed in Nashville, the highest number since 1997. Some 90 percent of those killed were shot by a gun.

The state is the 15th highest in terms of gun ownership, CBS News reported, with 39 percent of the residents owning a firearm.