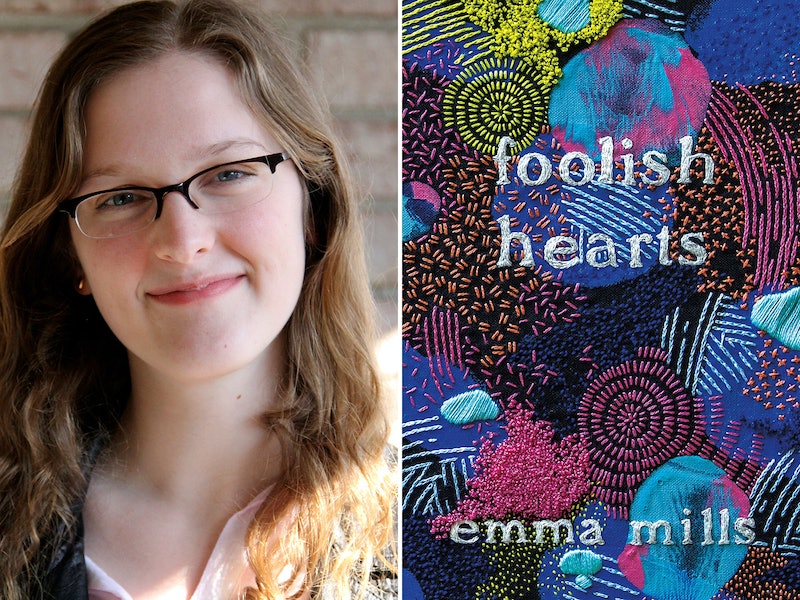 When it comes to Emma Mills books, you know you can expect a young adult perspective on life and love... with some super relatable pop culture influences thrown in. From her first release, 2015's First & Then, which was heavily inspired by both Pride & Prejudice and Friday Night Lights, to 2016's This Adventure Ends which tackled TV fandom, Mills has had a knack for combining a relatable love of pop culture with all the realistic growing pains of our teenage years. For her latest book, Foolish Hearts, Mills started with Shakespeare's A Midsummer Night's Dream.

"In the case of Foolish Hearts, I knew I wanted to write a story about a school play," Mills tells Bustle. "I was involved in a high school production of A Midsummer Night's Dream when I was in college, and I was so inspired by the passion and commitment of the kids who were involved in the show. I also loved the idea of writing about a high school production where the play is a bit reflective of what is going on in the lives of the characters."

Those characters include Claudia who, on the day of the last party of the summer, overhears the breakup of Paige and Iris, the It-couple at her school. Now on the wrong side of Iris, who also happens to be one of the meanest girls in school, Claudia doesn't know what to expect when the two are paired up to write a paper — let alone when they're both forced to try out for the school production of A Midsummer Night's Dream.

But mandatory participation has its upsides — namely, an unexpected friendship with Iris (fueled by a boy band obsession) and a guy named Gideon Prewett, who just happens to have the best dimpled smile Claudia's ever seen. As Claudia's world starts to expand, she finds that navigating a world filled with new friends and old, burgeoning romance and family drama, is harder — and more rewarding — than she could have imagined.

It's the fandom aspect of the book, both with Iris sharing her love of boy band TION and Claudia's obsession with online MMORPG Battle Quest, that truly bring the characters together. Mills weaves this love of media into the narrative, using it to show how what we consume can be such a huge part of our lives — and can even become these sort of "secret" or "at odds" parts of ourselves and our personalities. And if it reads authentically to you, it's for a really good reason: Mills is a fan, too.

"I love the concept of fandom in general—how it’s both something that you join, and something that you are," Mills says. "With Foolish Hearts, I wanted to explore a different type of fandom—that of a boy-band. My boy-band roots run deep; I loved NSYNC as a kid, and I got unexpectedly invested in the One Direction fandom as an adult. I love how unabashedly fans of these bands love both the music and the singers themselves. In Foolish Hearts, Iris’s passionate love of her favorite band is a bit at odds with what Claudia has seen of her so far, and it becomes a point of bonding between the two of them—almost a way in for Claudia to see Iris’s true self."

Yet even as Claudia begins to open up to Iris's true self through TION, she has a hard time doing the same for both herself and others, including her best friend, her brother, and Gideon. Of course, we've all read those books or watched those films where the heroine just doesn't get that the guy is into her. And while that experience can be frustrating to say the least, you thankfully won't find any of it here. Because Claudia's self-sabotage is at once so authentic and familiar that you'll only be rooting her along—through her internal doubts, her damaging past experiences, and being confronted with the truth that appearances can be deceiving.

"Self-sabotage is a great way to describe it—Claudia definitely gets in her own way sometimes! She’s very suited for Gideon, and he’s suited for her, but she can’t get past her own issues in the moment," Mills says. "It’s less bound in her having total ignorance of his feelings, and more coming from a place of fear—of the unknown, of not measuring up, of rejection or disappointment. I think this can be a common experience, especially in high school. What interests me is the tipping point for a situation like this—the realization that it’s a risk worth taking. "

I think this can be a common experience, especially in high school. What interests me is the tipping point for a situation like this—the realization that it’s a risk worth taking."

And it's this that will elevate the funny, heartwearming, relatable characters in Foolish Hearts right off the page. By pulling back the curtain on the place where our private and public personas meet, and where our expectations combat with reality, you will see your teenage self—and probably a bit of your adult self, too—reflected back to you in perfect detail.

"I’m really intrigued by the notion of who a character presents themselves to be, how they are perceived, and who they really are—and how these aspects don’t always necessarily align," Mills says. "I’m really interested in the notion that people aren’t always what they seem to be on the surface, and I think it’s something that’s readily explored in [our teen years], when everyone is in a bit of a state of flux, figuring out who they are and who they want to be."

More like this
The 20 Best Audiobooks To Fall Asleep To
By Aoife Hanna and K.W. Colyard
Conversations With Friends' Endometriosis Scenes Are As Brutal As It Gets
By Ivana Rihter
'Bridgerton' Star Nicola Coughlan Confirms Season 3 Will Focus On Colin & Penelope
By Grace Wehniainen and Alyssa Lapid
The Monster In 'The Essex Serpent' Was Inspired By A Real Local Legend
By Sophie McEvoy
Get Even More From Bustle — Sign Up For The Newsletter