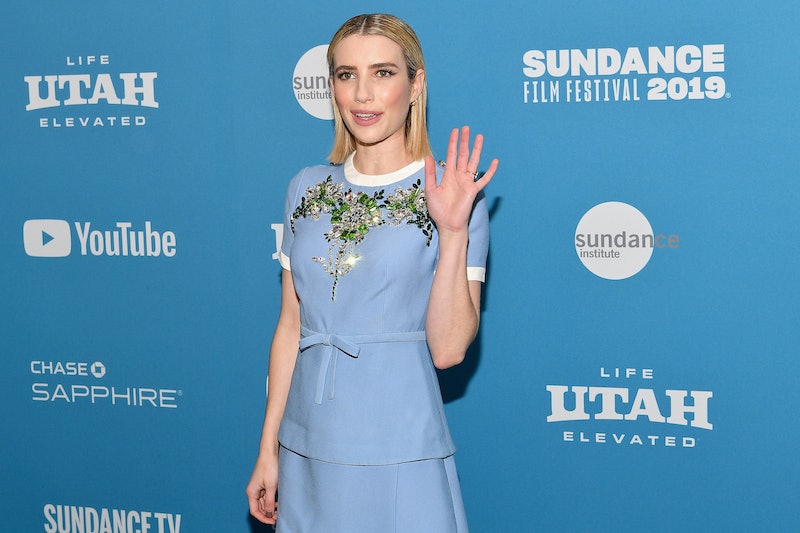 Swapping light strands for dark ones could end up being one of the hottest celebrity hair trends of 2019. Emma Roberts dyed her hair dark brown and it was quite a dramatic change from her usual golden blonde locks.

Roberts captioned her Instagram photo revealing the new 'do with a simple sentiment: "Back to basics." However, her new shade is anything but basic. It's a warm, rich, and chocolate-y shade with subtle golden highlights woven throughout. The look has undeniable depth and dimension.

The shade highlights Roberts' peaches 'n' cream complexion. It also complements her center-parted and face-framing long lob she has been rocking for a while now. You know a cut and color are an absolutely ace pairing when they call attention to other features, such as her Twiggy-like lashes and berry-stained, mega matte lip.

Fans were quick to react to the lewk, flooding the comments section of the post with praise. As of press time, the pic has generated over 600,000 likes, and a lot of heart and fire emojis.

One user commented, "Anything but basic," in reference to the caption. That pretty much says it all. Emma Roberts as a brunette for the win.

Nikki Lee at Nine Zero One Salon also posted a snap of Roberts' new 'do. These shots might inspire you to book an appointment with your own colorist to shake things up.

A quick scan of Roberts' Instagram shows her rocking her familiar blonde hair just a few days ago while visiting NYC and celebrating her 28 birthday.

Roberts often favors a slightly punk rock coif, mixing dark roots with a lighter shaft. She has demonstrated a consistent willingness to try new things when it comes to her mane. You can't argue with the results.

Roberts has gone with several variations of blonde over time — like this warm golden shade in February 2019.

Roberts also slayed a cool AF, white-hot bob with a deep side part in December 2018.

She clearly loves texturized tresses. These buttery blonde waves worn in October 2018 prove her lob is all sorts of versatile.

Robert showed off some considerable length in August 2018. The loose waves appeared to be the work of extensions...

... because she returned to the lob a month later in September 2018.

The black beret and scarlet eyeshadow were the perfect accoutrements to her blunt blonde bob in June 2018.

Roberts had a pitstop at blunt 'n' blonde baby bangs, which looked like clip-ins in January 2018.

Roberts has also went strawberry blonde for a hot second back in March 2017.

Flashback to that time that Roberts had long and thick brown locks in May 2017.

Here's hoping that Roberts sticks with her brunette lob for a while since it looks so smashing. Stay tuned to Roberts' Insta to see how she styles this shade over the next few days — and hopefully — months.