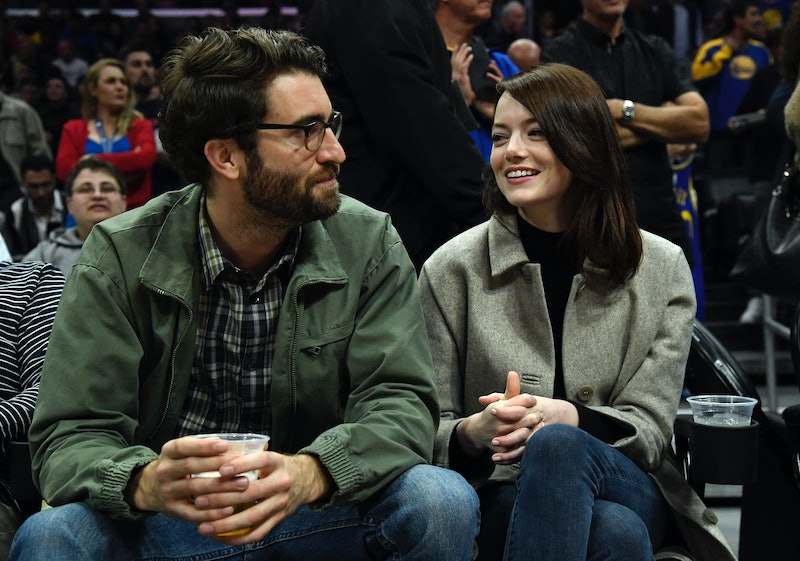 Wedding bells are ringing in an Oscar winner's future. Emma Stone is engaged to Dave McCary, her longtime beau. The actor showed off a pretty impressive diamond ring in an Instagram photo with her new fiancé, seemingly announcing her engagement, in an Instagram post on Wednesday, Dec. 4. McCary, who shared the photo, captioned the photo with a simple heart emoji. A representative for Stone also confirmed the engagement to Bustle.

Stone is known for never talking about her personal life, so you'd be forgiven if you had no clue these two were even dating. But, Stone and McCary have reportedly been dating since 2017 — they were first spotted out together in June of that year — and they've been spotted out and about a few times since then. Earlier this year, they made a rare public appearance together at the SAG Awards, where Stone was nominated for two awards, for her performances in Manic and The Favourite. He was also spotted sitting next to her at the 2019 Oscars, where she was nominated for Best Supporting Actress.

It's unclear how the couple first met, but they do work in the same circles. McCary is a writer and director on Saturday Night Live. And according to IMDB, he directed a segment when Stone hosted the show in 2016 — a mock commercial for "Wells for Boys." (McCary also directed the infamous Ryan Gosling "Papyrus" sketch.)

Stone previously fueled engagement rumors in April, when she was spotted out and about wearing a diamond ring on her ring finger, as noted by Elle. That said, given this recent Instagram announcement, it seems that may have just been a false alarm.

If, however, you're hoping to read about the (no doubt very romantic) proposal story in the press, you might be out of luck. Stone has rarely addressed her relationships with the media. "I understand the interest in it completely, because I've had it too," she told The Wall Street Journal in 2015 of the speculation about her romantic life. "But it's so special to me that it never feels good to talk about, so I just continually don't talk about it."

Stone might want to keep the details of her engagement to herself, but there's no hiding that ring — or her happiness in their announcement photo.