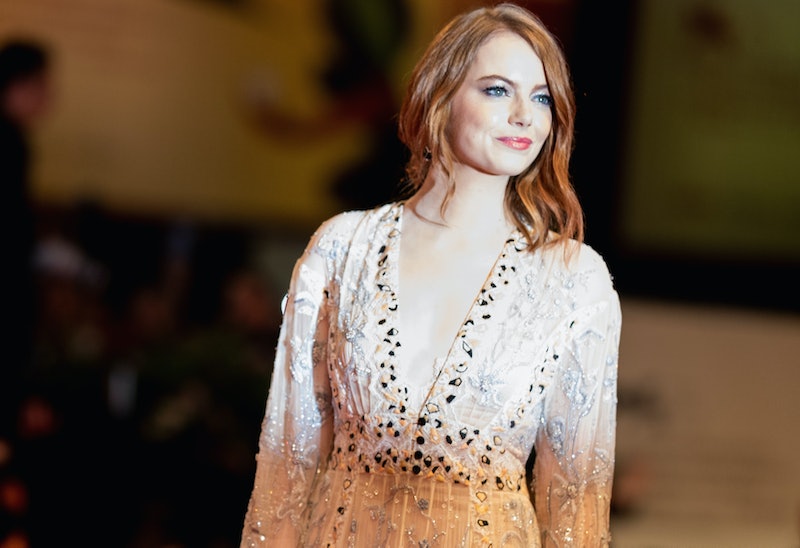 If fans can learn anything from the first clip of the new Billy on the Street, it's that Academy Award winner Emma Stone really needs an Instagram account. Yes, it's actually happening: Billy On The Street is back. And with it comes all the yelling, accosting of strangers, and the asking-unsuspecting-New-Yorkers-important-questions one could want. Important questions like, why isn't Emma Stone on Instagram — or any social media — and what would it take to get her there? In all fairness, Stone really is missing out on prime Instagram content from Will Smith, Busy Philipps, and Hamlet the therapy pig. And in this clip, Eichner and the rest of New York City are quick to let the actor know that she should really reconsider her decision to stay away from social media.

People got a first look at the revamped Billy on the Street, which is beaming back into viewers' lives after more than 18 months off-air. Spectacularly, the first guest of the season is Emma Stone — you know, the actor that almost caused Eichner to fight a complete stranger ahead of the 2017 Oscars. (That's also the segment that first caught the attention of Nicki Minaj. This show is so powerful.)

The newest season kicks off with Stone and Eichner bouncing around the city, with Eichner either announcing Stone's presence to fans or immediately demanding strangers request she starts an Instagram account. He also lightly harasses the Oscar winner, because that's how these things tend to go.

Earlier this year, Eichner released a statement on why now is the right time to bring back cult hit Billy On The Street, per People, this time in partnership with Funny Or Die, with webisodes and special clips only available online:

"After five seasons of the TV series, I knew I wanted to set the show aside in order to create some time in my schedule to pursue other projects. Now that those are taking shape, I’m truly thrilled we’ve found a way to bring Billy on the Street back that makes so much sense for this particular show."

The writer and comedian took a moment to get serious, adding that the cultural climate has shifted since he stopped filming the show — and that he hopes that the show addresses it in a way that provides insight and relief. He continued:

"As we all know, this is a very divisive, anxiety-ridden time and I hope these new segments — featuring the most stunning roster of guests we’ve ever had — give people a small burst of joy in their timelines while allowing me to comment on culture and the world at large in the unique way this show allows me to."

Fans will be able to tune in to regular episodes on truTV, but Eichner will be offering internet exclusives as well. Those will be made available on Eichner's social media accounts, the series' official YouTube account, and the website Funny or Die. Longtime Billy On The Street viewers can also expect the triumphant return of Elena — the show's second breakout star.

Finally, if this television segment is all it takes to get Emma Stone on Instagram after years of fans begging for it? Just give all of the Emmys, Golden Globes, and more to Billy Eichner right now. Heck, give him Academy Awards. Tonys, even. The world needs curated Emma Stone content. It could be the only thing that makes 2018 worth all the nonsense.