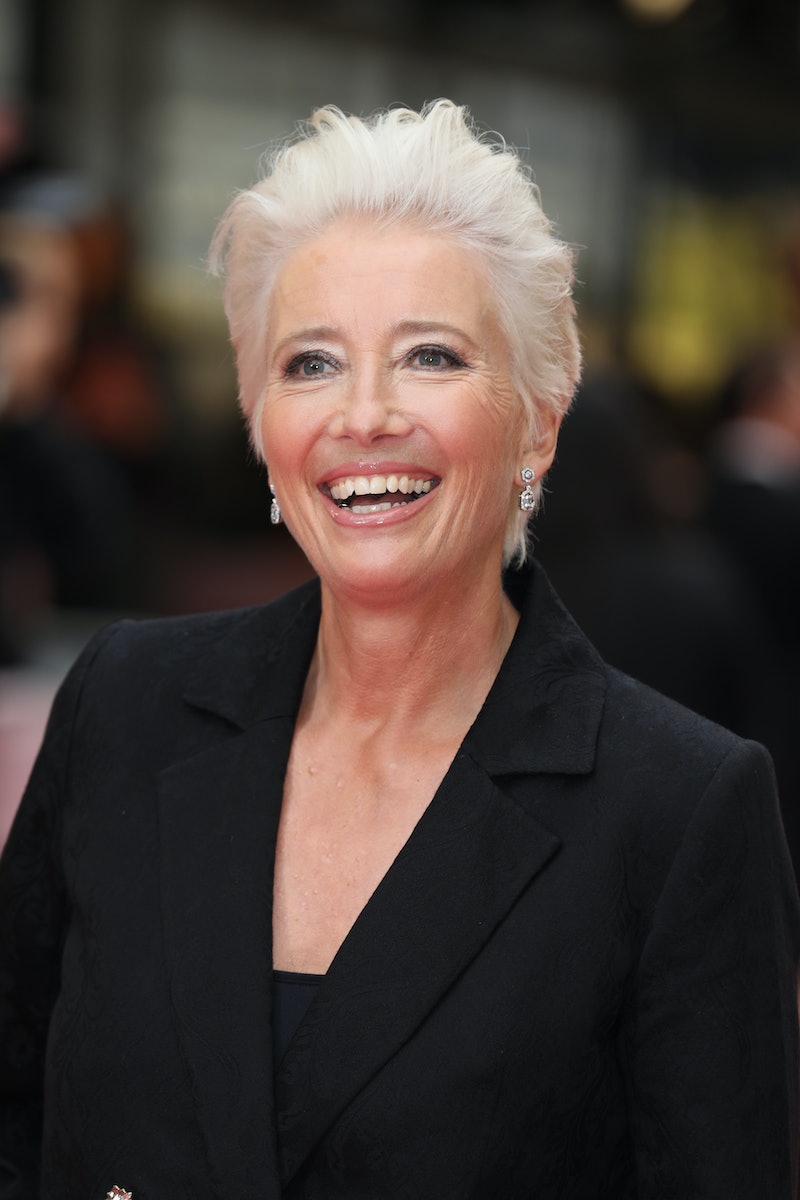 Further proving that she's the ultimate Hollywood role model, Emma Thompson dropped out of the animated film Luck in response to Skydance's decision to hire former Pixar head John Lasseter to run Skydance Animation. A representative for Thompson confirmed this, as well as the fact that she had not yet begun recording her part in the film when she decided to step down from Luck, an Inside Out-esque comedy that "pulls back the curtain on the millennia-old battle between the good luck organization and the bad luck organization that secretly affects our daily lives," according to People.

Lasseter took a leave of absence Pixar and Disney Animation after allegations of sexual misconduct against him went public in November of 2017. These allegations reportedly involved unwanted touching and hugging of female employees, according to The Hollywood Reporter. At the time, Lasseter released a statement, admitting to some "missteps." In a memo to employees, Lasseter did not deny the allegations against him and apologized for his behavior, saying, "I especially want to apologize to anyone who has ever been on the receiving end of an unwanted hug or any other gesture they felt crossed the line in any way, shape or form." He officially left the company at the end of 2018, and, in January of 2019, was hired by Skydance Animation as the new head of the studio.

News of Thompson's decision to leave the film quickly hit the Internet, and the Time's Up organization praised her for standing up for her beliefs by leaving Luck. "Thank you, Emma, for your leadership and moral clarity," the movement's official Twitter account wrote on Tuesday, Feb. 19. Time's Up had previously condemned Skydance for hiring Lasseter, telling THR in a statement back in January that their decision to bring him onto the team "perpetuates a broken system that allows powerful men to act without consequence."

Thompson has yet to comment about her decision to step down from Luck, but this is far from the first time that the outspoken writer and actor has fought back against Hollywood's mistreatment of women. In 2017, Thompson recounted on the Swedish talk show Skavlan that she had once threatened to quit a film because a producer attempted to force a female co star to lose weight.

"There was a wonderful actress in a film I did called Brideshead Revisited," Thompson told the hosts during a conversation about the impossible beauty standards in the entertainment industry. "The producer said to her, 'Will you lose some weight?' And she was absolutely exquisite! I said to them, 'If you speak to her about this again, on any level, I will leave this picture. You are never to do that.'" Hayley Atwell, who played Julia Flyte in the 2008 adaptation of Evelyn Waugh's novel, told a version of the same story to First Post before Brideshead Revisited was released, noting that Thompson "hit the roof" when she discovered that Atwell was being pressured to lose weight.

And though the incident involving Thompson and Atwell reportedly happened over a decade ago, the Oscar winner told the Skavlan hosts that such behavior isn't unusual for women working in Hollywood. "It’s evil what’s happening and what’s going on there, and it’s getting worse," she told the interviewers before continuing, "Sometimes there are just some subjects that you absolutely have to make noise about because it’s so tedious and it’s gone on and on."

While there's clearly still a long of work for movements like Time's Up to do in Hollywood, Thompson's dedication to standing up for her beliefs and supporting other women in the industry will hopefully inspire others to take a stand of their own.