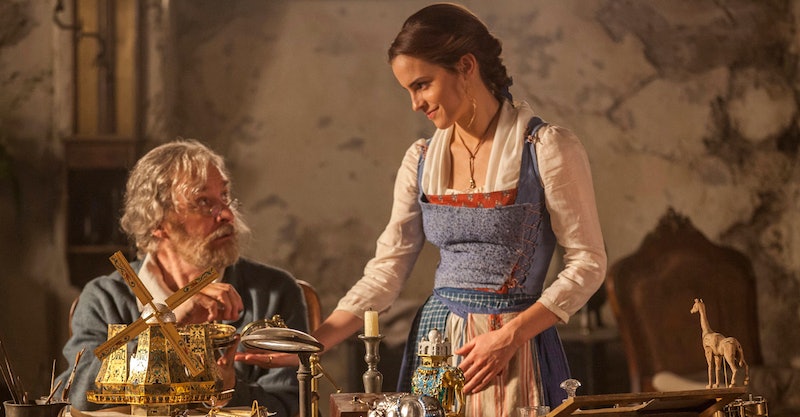 As the release date of Disney's live-action Beauty And The Beast draws ever closer, the cast have been giving insights about what viewers can expect from the new movie. Based on Disney's classic animation, which was released way back in 1991, the update features Emma Watson as Belle, which has got to be some of the most perfect casting of all time. An ardent feminist, Watson has spoken to Entertainment Weekly about the development of Belle's character, and, according to the Harry Potter star, some serious updates have taken place. Most notably, there is much more feminism in 2017's Beauty And The Beast.

One of the key changes in the fairy tale revival is that Belle has become an inventor, the occupation that her father had in the original movie. Although it might seem like a small change, Watson describes the mindset of the villagers in Belle's town and how negatively they react to new ideas, which makes the small change a big driver of Belle's personal journey. “They don’t think women should read and it goes further than that," she said. "They are deeply suspicious of intelligence."

As every Disney fanatic knows, Belle always has a book in her hand, and reading is one of the hobbies that Belle bonds with Beast over. It's exciting to know that Belle's literary prowess is still a crucial attribute in the reboot and that the character is as smart as ever.

In her interview with Entertainment Weekly, Watson also revealed that one of Belle's inventions is a washing machine of sorts, so that women aren't relegated to household chores. However, her neighbors are skeptical of her invention:

"Breaking the washing machine is symbolic of not just them breaking something she spent hours working on, but them really trying to break her spirit and trying to push her and mold her into a more ‘acceptable’ version of herself.”

Watson's statements about Belle are applicable to women everywhere. Forced into a role she doesn't want, Belle rebels against those who don't accept the career she's forged for herself. She's adamant to live her life on her own terms, which is something we all need to strive even harder for in 2017. It's so important for characters to reflect every day life, and, according to Watson, Belle's story is more relevant than ever. Turning Belle into a strong, feminist character is an inclusive and respectful move, which I can't wait to see onscreen.

Beauty And The Beast comes out on March 17, and, until then, I'm going to sing karaoke to the original soundtrack in my bedroom, because I make great decisions.

More like this
Twitter Is Identifying With Sally Field & Jane Fonda’s Friendship In New Viral Video
By Jake Viswanath
Another Side Of Rupert Grint
By Maria Sherman
Pamela Anderson’s Dating & Marriage History Could Be Its Own TV Series
By Jake Viswanath
Jennifer Coolidge Hunted For Jewels & Lashes In J.Lo’s Hotel Room
By Jake Viswanath
Get Even More From Bustle — Sign Up For The Newsletter
From hair trends to relationship advice, our daily newsletter has everything you need to sound like a person who’s on TikTok, even if you aren’t.