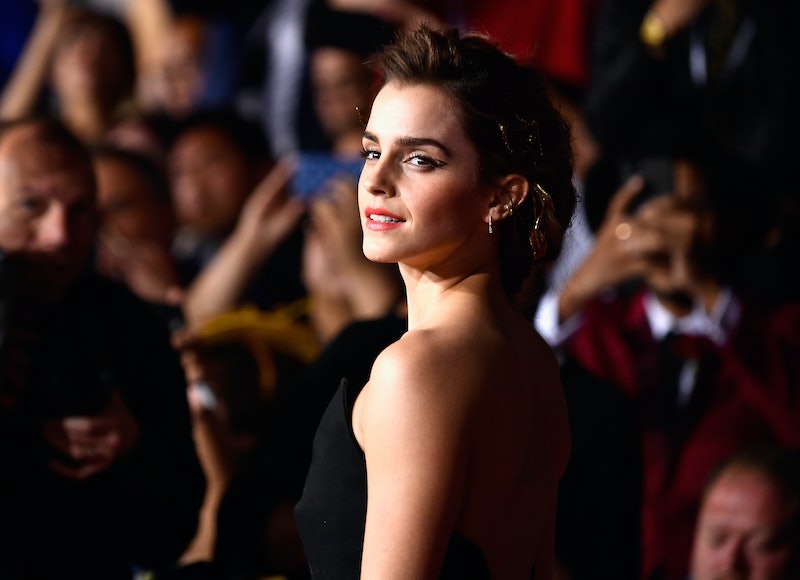 In a move that would definitely make Hermione Granger proud, actress and self-proclaimed bookworm Emma Watson celebrated International Women's Day by leaving feminist books at the monuments of female icons in New York City. Like Hermione, Emma Watson clearly believes in the power of literature to spur action and inspire resistance.

Watson, who runs the Our Shared Shelf feminist book club and is a U.N. Ambassador for her organization He For She, has hidden books on the streets of New York in the past. In Nov. 2016, Watson collaborated with Books On The Subway to hide copies of Maya Angelou's Mom & Me & Mom in various locations in New York City's subway.

She continued the tradition on March 8 to coincide with both International Women's Day and A Day Without A Woman, a 24-hour protest in which women across the world were encouraged to take the day off work, purchase goods only from female- and minority-owned businesses, and protest or volunteer on behalf of women's rights.

Decked out in a red beret, the "ninja book-fairy" set out to hide various works feminist literature at a few key locations in NYC — see where she hid them below:

Bluestocking Bookstore, a volunteer-powered shop on the Lower East Side of Manhattan, focuses on selling works about feminism, queer and gender studies, global capitalism, climate and environment, political theory, police and prisons, race and black studies, and more.

The Joan of Arc memorial in Riverside Park on the Upper West Side pays tribute to the 14th-century feminist icon.

Located in Bryant Park and adjacent to the New York Public Library's main branch, the Gertrude Stein statue is a celebration of the woman who revolutionized American literature.

Also located in Riverside Park, the Eleanor Roosevelt monument is a testament to the achievements of America's longest-serving First Lady.