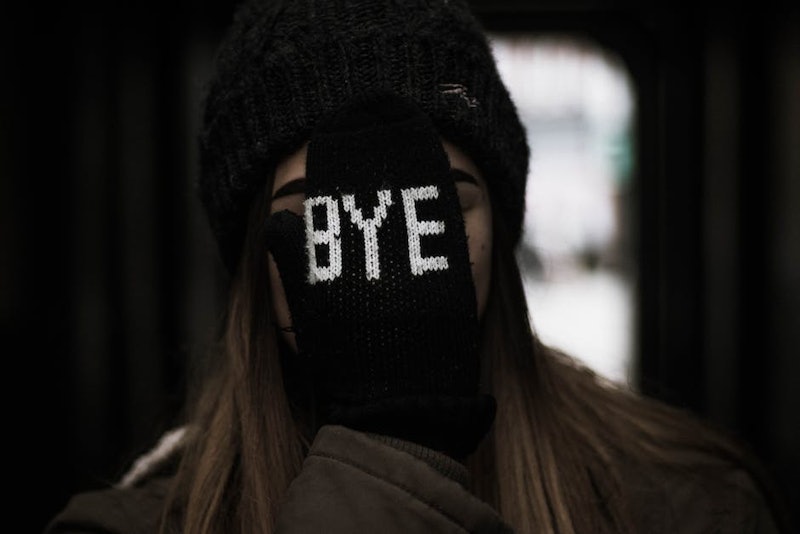 Your alarm goes off in your bachelor pad the morning of Wednesday, March 8, and already you're ridden with dread. The day of that ridiculous "women's strike" is finally here. Whatever — it'll be nice to have a bro day at work for once, anyway.

You take especially long to get out of bed, because strangely, your apartment is freezing. You steel yourself and stroll into the kitchen, further disheartened by all the dirty dishes piled up in your sink. You go to put them in the dishwasher, but ...

You blink, the room coming into focus. Where's your fridge?

You turn on the television, where a harried male reporter is shouting over the sound of sirens blaring.

"This is Rick McRidiculous, reporting live from D.C., the capital of a nation, which is now in the throes of chaos unlike any it's ever seen," says the reporter. "The women have all disappeared to a remote, inaccessible series of islands in the Bermuda Triangle — and they've taken all of their contributions to society with them."

You look around your pilfered kitchen, the realization slowly dawning on you.

"Our only official correspondence with the women is a tweet sent on behalf of womankind at 11:59 p.m. from Beyoncé's Twitter account, simply reading '@realdonaldtrump BOYS, BYE.'"

Wait, they actually went through with it? You run to the window to see what's going out on the street, but — holy crap, where's your fire escape? You wrench yourself back into the building just in time, stumbling back into the living room.

"Men all over the country are waking to homes without Alice Parker's innovative first conceptualization of gas heating, without Josephine Cochrane's dishwasher, without Florence Parpart's modern electric refrigerator. And if you're a commuter, you might want to think twice before-"

You turn the television off. The day will be over soon enough, and all those silly women will come crawling back.

Our only official correspondence with the women is a tweet sent on behalf of womankind at 11:59 p.m. from Beyoncé's Twitter account, simply reading '@realdonaldtrump BOYS, BYE.'

You head out for work, to find that your car is as cold as your apartment. You go turn on the heater, but for some reason the dial won't turn. What on- Oh, good god. What exactly are these women trying to prove?

It starts to rain shortly into your commute. "Perfect," you mutter, turning on your windshield wipers. Nothing happens. You frown, pulling over as your vision gets obscured, and just barely avoid a car bumping into another car and skidding down the road.

You park your car. "Are you guys okay?" you call out.

"I would be," shouts one of the men, shaking his fist at the sky, "if Mary Anderson's innovative windshield wipers had still been on my car!"

You sigh. It's going to be a long day.

You leave your car parked on the side of the road and walk the rest of the way to work.

"How goes it, Bobert?" asks your co-worker Steve, who is carting his infant son in with a stroller.

"Better than you," you concede, shaking out your wet hair. "Why did you bring Steve Jr.?"

Steve rolls his eyes. "The men who took over the daycare are demanding $15 an hour to take on full responsibility for keeping Junior clothed and fed and nurtured and never taking an eye off of him, so I can't afford to drop him off there today," says Steve.

Steve shoves the stroller to his desk, mumbling, "You'd think the government would find some way to make childcare more accessible so there weren't so many hardworking men stuck at home with their kids today, but... "

You've already stopped listening; it's not your problem. But looking around the office, you see that Steve isn't the only one having a rough International Women's Day. In fact, the office is in disarray. The entire place is littered with empty desks and men with crying babies, whiny toddlers, disgruntled children, and irate teens.

"Why aren't all these kids in school?" you ask Steve, aghast.

Steve looks at you like you're a moron. "The schools shut down," he said. "Over three quarters of the teaching staff followed Beyoncé and Hillary Clinton onto that ark."

You weave through the crowd to your desk, which is empty — no computer, no "The Dude Abides" coffee mug, no fun collectible bobbleheads.

"We were robbed last night," says one of your co-workers by way of explanation. "Without those CCTV cameras, the security guards didn't notice."

"Oh well," you say, resigned to the misery of this day. "I'll grab a loaner computer from HR."

Except this isn't the usual loaner from HR — it's slow, nearly impossible to navigate, and all the systems you use to get your job done aren't loaded on it.

"Oh, right, good luck with that," says another one of your co-workers with a sigh, holding up his own crap computer. "Without the programming innovations of Grace Hopper or the original algorithm for creating computers from Ada Lovelace, these are pretty useless."

"How is it that everyone seems to possess uncanny amount of knowledge about women's history today?" you snarl, pushing the computer away from yourself.

You try to soothe yourself with the dulcet tones of Adele and Rihanna, but their Spotify playlists are empty. You try to enjoy a damn cup of coffee, but there are no filters to make it with. You check your dating app to look for a hookup to take the edge off tonight, but as soon as you select "man seeking woman," the app flickers to a photoshopped image of Queen Elizabeth flipping the bird with both hands and then goes black.

Eventually you head over to a meeting you scheduled to drum up new initiatives to boost sales. "Any ideas?" you ask, looking around the half-empty room.

Silence. This is usually the part where Jeannine or Penelope or Maria jump in with ideas they've prepped ahead of time that you "improve" and "expand" on and ultimately take credit for, but that's kind of hard to do when they're all sipping mimosas under a canopy with Michelle Obama 3,000 miles away.

"I know," proposes Arfibald. "What if we offered the product in different colors?"

"Hmm," you say, considering. "Or we could make the merchandise in different hues."

Gregward pipes up then: "We could probably just create different shades for the deliverables?"

The schools shut down .... Over three quarters of the teaching staff followed Beyoncé and Hillary Clinton onto that ark.

Sometime after lunch, your phone rings. You peer down at the caller ID, but weirdly, there isn't one.

"Listen, Bobert," says your boss on the other end, before his voice fuzzes out.

"What?" you say. Why is this connection so grainy? "I can't hear you."

Your boss groans. "Without the contributions of Hedy Lamarr's radio wave manipulation, wireless communications have been crappy all day," he shouts through the phone. "Anyway, we need a plan B in case the women don't come back. I'm going to need you to help me make budget cuts before raise season."

"What's wrong with the proposed cuts I left on your desk last week?" you ask. "Can't you just apply them to the current staff?"

Your boss scoffs. "Look at Gregward and Arfibald's salaries. You're proposing I pay one man 77 percent of what another man is making to do the same job? That's ridiculous."

"Ridiculous, Bobert," says your boss, hanging up the phone with a click.

It's been a long day. Thoughtlessly, you tap your speed dial to call your mom to vent. It immediately goes to voicemail.

"Busy living in nonviolent cooperative harmony with three and a half billion of my bitches," you hear your mother trill on the other end. "Please leave a message after the beep!"

You hang up bitterly and trudge over to the coffee shop, planning to treat your exhausted self.

"Can I get a chocolate chip cookie?" you ask.

The man behind the counter shakes his head. "Not unless you want to go back in time and stop Ruth Graves Wakefield from making the first one in 1903," he says glumly. "But I can offer you an oatmeal raisin?"

You slump in defeat. "I'll just head to the bar," you say.

"I'd skip it, man. Did you know Mesopotamian women were the first to invent, consume, and distribute beer?" He shakes his head, wiping down the counter. "Bummer."

"Bummer," you agree, walking back out into the night.

Eventually you curl up into your bed and turn on the television. The only things left on air are 12 Angry Men, Master And Commander, and Glengarry Glen Ross, which play on loop on the only three channels that aren't airing the chaos taking place all over the world. You settle into your bed, one eye on the screen and the other on the horizon outside your window.

"Hey, Siri," you ask your phone. "When are the women coming back?"

In a moment of weakness, you pick up your phone from the bed, selecting every woman in your contacts: "u up?"

Your finger hovers over the "send" button, a single tear streaming down your cheek. Then you scroll back and delete the text, replacing it with, "I'm so sorry."